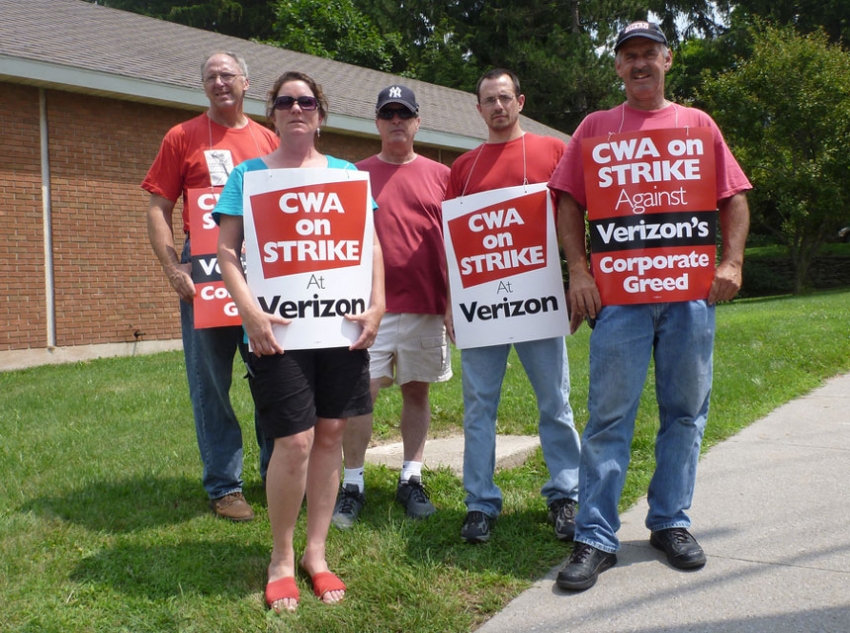 Leaders of the unions representing nearly 40,000 Verizon telecommunications workers in big cities and small towns from Maine to Virginia announced today that their members would be going on strike at 6 a.m. Wednesday without “a major change in direction” in contract talks now underway, according to Communications Workers of America (CWA) president Chris Shelton.

The unions—CWA and IBEW (International Brotherhood of Electrical Workers)—are fighting to keep high-quality working class jobs in the United States.

Jobs in the two major categories of work pay relatively well—about $60,000 a year for call center workers and about $85,000 to $90,000 a year for technicians who install and service the telecom network, according to Bob Master, assistant to the CWA New York area vice-president Dennis Trainor.

Verizon is flush financially. It earned $18 billion in profits last year and about $1.8 billion a month so far this year. Last year it spent about $13 billion in buying back its stock, a dubious strategy to enrich stockholders. Now it is trying to buy Yahoo!, a long-shot target for a $35 billion speculative bet.

With the salaries that their union contract provides and the skills they learn, Verizon workers can provide their communities and families stable and supportive leadership. It will be harder to play that role with the lower wages, lesser benefits and less stable work routines that Verizon’s proposals would provide.

For example, Dan Hilton, a cable splicer from Roanoake, Va., who has been with Verizon for 20 years, often is sent out to provide cable service for an entire community or to restore service after disasters. The company has become addicted to such flexibility, but it means that its employees can not be at home when their family needs them.

“My wife had back surgery last year and needed my help, and I want to enjoy time with my grandkids,” he says. “We want to do a good job, go home and spend time with our spouses. … We’re just ordinary working people, doing our job, hoping for our company to succeed. That’s what life’s all about.”

But his job—and the company’s success—also involves serving people like himself in his community. He wants Verizon to expand FiOS, the company’s bundled Internet access, telephone and television service, in his home area, something he is not available to do when he is dispatched far away for long times. But he and CWA vice-president Ed Mooney see the company’s failure to build out fiber optic networks or to explain why they are adopting such a policy as representing Verizon’s disinterest in caring for needs of long-term customers.

Workers like Hilton and union leaders think that Verizon is narrowly focused on profit maximization, not the long-term well being of the company, the community or its employees. In the current negotiations over a contract that expired last June, Verizon wants lower health care costs regardless of the consequences. For their part, union negotiators have offered some changes to save some money, such as encouraging more use of preferred providers. But the unions are resisting pension cutbacks that Verizon demands.

The telecom industry has undergone decades of tumultuous change. Now even Verizon, a traditional land line telephone service provider, is ditching as much as it can of the land line business as possible and emphasizing cell phone service. It is no coincidence that Verizon has also been most intensively fighting recognition of unions in its cell phone operations.

“Our major issues involve contracting out of work,” says Trainor. That practice accounts for much of the 40 percent loss of jobs over the past decade, according to Master. The technicians, for example, not only feel pressure to work away from home for long periods but also the threat that if they do not, Verizon will turn to non-union subcontractors to do their work. On the other hand, call centers workers face the prospect of Verizon closing more of their centers and moving the work to Mexico or the Philippines.

Telephone strikes can be tough battles, with managers trying to handle much of the immediate service and repair work in central facilities as they can. But Verizon workers have some experience preparing for strikes and for ways to make their case to customers that the workers and the union are on their side, even more than Verizon itself.

The CWA is a fiscal sponsor of In These Times. Sponsors play no role in editorial content.