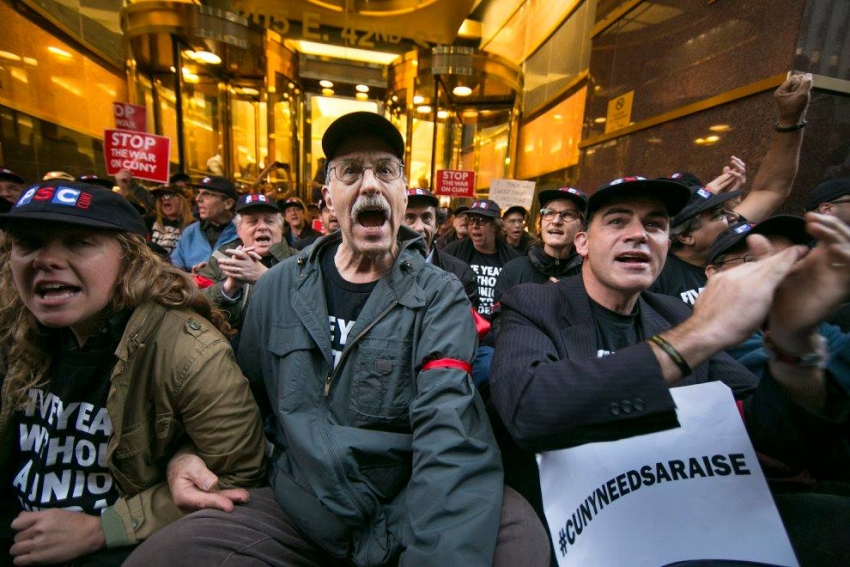 Members of the CUNY Professional Staff Congress during a civil disobedience action in November 2014. (PSC)

This semester, I’m teaching our department capstone seminar, on the classics of political economy, in which students are expected to write a lengthy piece of original research.

It’s an intense process for the students. We start with a one- to two-page précis. The students then write a detailed outline of the paper. Then they submit a rough draft (I just got the rough drafts yesterday and have begun reading them today). And then the final draft, which is due in a few weeks.

My goal is twofold: first, to get the students to really dig into a topic (I’ve written about that here); second, to teach the students that old truism that all writing is just rewriting. I think the fancy ed folks like to call that “iterative writing” (google that phrase and you get 16.2 million results). But to me, it’s just writing. Anyone who tells you otherwise is selling you snake oil.

This kind of teaching, that kind of intensive feedback, of going over sentence after sentence, is a lot of work. It can be grueling and challenging for the student.

I remember last semester, in a different class, where we also do rough drafts, writing on the student’s paper (she’s a recent immigrant from Nigeria), after she had submitted multiple drafts, this:

This is an exemplary sentence. Do you see how clear and concrete it is? How perfect and precise its attack? It says what it needs to say and, then, moves on. The fact that you had to carve this out of so many drafts is a testament to how hard won such a sentence is. This is how you always want to be writing.

This kind of work can also be challenging for the professor. But it’s work we have to do. It’s our payback, our part of the social contract. Mr. Damon did it for me in high school; I have to do it now for my students.

Make no mistake about it: This isn’t just an assault on the work I do as a professor; this is an assault on our students. Like I said, Mr. Damon did this work with me in the fancy Westchester suburb that I grew up in, where the Clintons now live. Sheldon Wolin and John Murrin and Lawrence Stone did it with me at Princeton, where I was an undergraduate. But our society doesn’t want the kids I teach to get that education. So it pays me to give them less than I got. Not because they’re any less smart or talented than I was when I was their age. But simply because they’re not white, or wealthy, or privileged, the way I was when I was their age.

We have two choices: I can give those students less, or CUNY can pay me to give them more.

Today, I voted for the second option. I voted to authorize my union to call a strike or some other job action if the union’s leadership decides, after exhausting all the possibilities at the negotiating table, that a job action or strike is necessary. I joined thousands of my co-workers who have pledged to do the same.

I didn’t do it lightly. I’ve been on strike before; it’s no picnic. Not for the people who teach, not for their students.

But, as the song says, something’s gotta give. And it’s not going to be me.

Corey Robin is a professor of political science at Brooklyn College and the CUNY Graduate Center. He is the author of The Reactionary Mind: Conservatism from Edmund Burke to Sarah Palin and Fear: The History of a Political Idea.