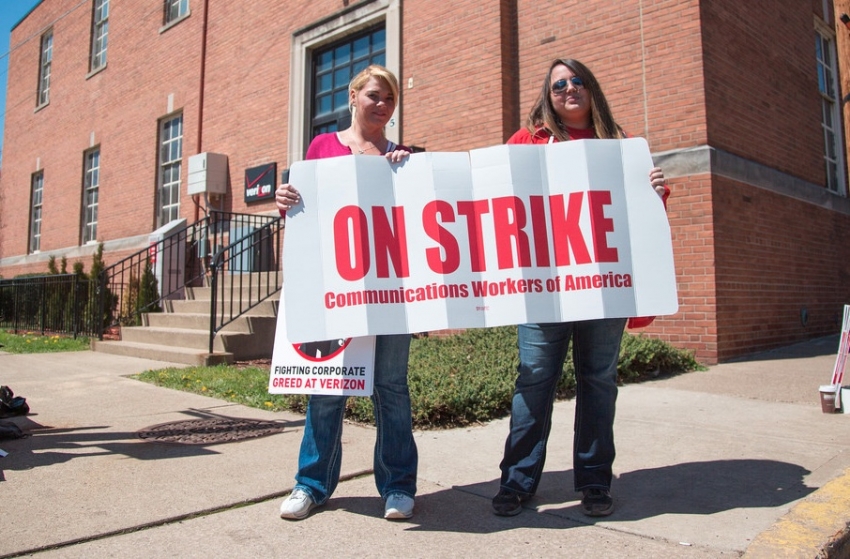 With the decisive victory for union members at Verizon, 2016 is already on pace to be the second year in a row where recorded strike activity has increased over the previous half-decade. Now, a new decision from the National Labor Relations Board (NLRB) could restore legal job protections for striking workers, making workplace job actions a more common—and more powerful—union strategy.

Workers simply do not have a meaningful right to strike if they do not have a right to return to the job when the strike is over. But, thanks to the judicial gutting of labor rights, going on strike is a high stakes proposition for American workers. Not only do striking workers lose out on pay and benefits during the strike, but they run the risk of losing their jobs entirely. So, while work stoppages are on the rise relative to the last few years, they are at historically low levels compared to the post-war era when wages actually rose with corporate profits.

In a new case, American Baptist Homes, the NLRB attempts to strike a balance between workers’ statutory right to strike and protection against employer retaliation for union activity and a boss’s Supreme Court-granted “right” to hire permanent replacement workers “to protect and continue his business.” Thankfully in this case, the exceptionally arrogant and stupid Executive Director of the employer in this case and her counsel went on the record that their use of permanent replacements was meant to “punish the strikers and the Union” and to discourage future strikes, as Benjamin Sachs has detailed.

For much of the last four decades, the NLRB has simply taken a boss’s word that the permanent replacement of striking workers was necessary to continue her business. Now, the NLRB has declared that it will return to an earlier, Supreme Court-approved standard in which employers’ rights to permanently replace striking workers may be “wholly impeached by the showing of an intent to encroach upon protected rights.”

In other words, the NLRB will investigate when an employer hires scabs—and they better have a good case. Since most strikes these days are defensive—pushing back against employers’ attempts to gut work rules, slash pay and benefits and bust the union—this is a big deal.

“…to interfere with or impede or diminish in any way the right to strike.”

A forthcoming book by labor law scholar Julius Getman, The Supreme Court on Unions: Why Labor Law is Failing American Workers, explores in depth the “judicial arrogance” of the court in substituting their own ideology and facts when shaping the labor law regime. It is particularly well timed as we look forward to a profound change in the Court in the wake of Justice Antonin Scalia’s death (although Getman clearly did not anticipate Scalia’s timely passing when he wrote the book).

One aspect that stands out in Getman’s book, to this writer at least, is the shakiness of the legal precedent that allows employers to permanently replace striking workers. It begs for a campaign of judicial activism to repeal it.

This legal vulnerability of strikers was established by a 1938 Supreme Court decision, NLRB vs. Mackay Radio. It was a poorly decided and little-revisited case upon which the entire anti-union playbook depends. Getman shines a welcome spotlight on the case, and inspires the conclusion that the so-called “Mackay Doctrine” is overdue for a sustained campaign of judicial challenge from unions and their allies.

In the original case, NLRB v. Mackay Radio & Telegraph Co., the union’s strike lasted all of one weekend. The employer continued operating by transferring workers from its other facilities, and when support for the union’s goals failed to materialize, the leaders called off the strike. When the strikers returned to work on Monday, four of the leaders were singled out and denied reinstatement.

The NLRB quickly ruled that the employer’s actions were clear violations of the law and went to court to order the employer to reinstate the four fired strikers, with back pay. The 9th Circuit Court refused to enforce the NLRB’s order, as this was generally a period when many jurists considered the labor act, in part or in whole, to be unconstitutional. That’s how the case got to the Supreme Court.

Ironically, the Mackay decision was hailed at the time as a victory for labor. It was yet another decision that cemented the constitutionality of labor law, but the Court also found for the union and the NLRB.

The labor relations act, after all, was meant to protect workers who engage in union activity from “discrimination in regard to hire or tenure of employment or any term or condition of employment,” and these four workers were singled out for their strike activity and told that they no longer had jobs.

Of course, Mackay had no time to hire permanent replacements in a weekend.

The issue was inserted by Justice Owen Roberts as an offhand comment, which I’ll quote in full because it bears scrutiny:

Although Section 13 of the act, provides, ‘Nothing in the Act should be interpreted to interfere with or impede or diminish in any way the right to strike,’ it does not follow that an employer, guilty of no act denounced by the statute, has lost the right to protect and continue his business by supplying places left vacant by strikers. And he is not bound to discharge those hired to fill the places of strikers, upon the election of the latter to resume their employment in order to create places for them.

In other words, the employer in Mackay broke the law because it discriminated against the strike leaders by singling them out and firing them, but if the employer had found a non-discriminatory way to discriminate against strikers (like, say, hiring scabs to replace them in the order of reverse seniority) then that would be hunky dory.

“…the right to protect and continue his business…”

In the four decades that followed Mackay, very few employers took the liberty to permanently replace striking workers, as it generally fell outside what was considered socially acceptable behavior by employers in the post-war era.

Which isn’t to say that some employers didn’t try to push the envelope in their union-busting attempts. Most judicial revisiting of Mackay comes from cases where the Courts rejected employer attempts to go further.

For instance, in a 1963 case the Supreme Court rejected an employer’s attempt to grant replacements a “super seniority” for their service as scabs by ruling that it was not “proper under Mackay.” It was this sort of right-wing judicial activism that pushed back on union rights and served to give a bad footnote the appearance of settled legal doctrine. But the court has never revisited the facts or logic of the Mackay decision.

As Getman points out, what is now considered the “Mackay Doctrine” is in direct conflict with the actual Mackay decision:

The holding is that it is illegal to decide which employees are entitled to work after a strike on the basis of union activity. But the dictum insists that the employer may give employment preference to those who work during a strike over those who strike, which is precisely the same result, penalizing union activity that was outlawed by the holding.

“It is impossible to know,“ writes Getman, “what led the Court to go out of its way to announce that the hiring of permanent replacements was consistent with the Act.” But one can easily guess that the conservative judges, aghast at New Deal encroachments on property rights, sought to ensure that the bargaining power of unions was “balanced” in some way.

The Mackay Doctrine wasn’t really put to use until the 1980s, starting with the Phelps-Dodge copper mining company, which bargained its Steelworkers local to impasse over drastic cuts in pay, benefits and working conditions, pushed them out on strike and then had the scabs vote to decertify the union 12 months later. This is how employers have weaponized Mackay to union-bust much of American industry. (And it would be clearly illegal under the new American Baptist Homes standard.)

The results are far from Justice Roberts’ nebulous “right to protect and continue his business,” and farther still from “balancing” the power of unions and management. Common sense dictates that the right of management to permanently replace striking workers be revisited; justice demands that the Mackay Doctrine be overturned.

Call me a cockeyed optimist, but I think Mackay is vulnerable to constitutional challenge as a violation of workers’ 1st amendment rights of free speech and assembly, 13th amendment protections against involuntary servitude and 14th amendment guarantees of due process and equal protection. As it is, the American Baptist Homes NLRB decision is certain to be resisted and appealed by business and industry, and will inevitably wind its way up the federal courts.

Even if the Court doesn’t go for those constitutional arguments, it could be ruled to have been “wrong the day it was decided” for having ignored both the plain language of the law, as well as the clear legislative intent. Or the Court could decide that their predecessors acted in the public interest by attempting to “balance” the power of unions and management in 1938, but that the track record of Mackay since 1983 demonstrates that true balance can only be achieved by restoring the right to strike without reprisal.

Or if the Court really wants to weasel out of the controversy, they could lean on the crucial (and crucially forgotten) “protect and continue his business” portion of the initial Mackay dictum—only granting the “right” to permanently replace strikers to employers who can demonstrate that they might go out of business otherwise, or, as in American Baptist Homes, that they have no ulterior union-busting motive.

Not that Julius Getman would necessarily agree with my proposal. “The long existence of the doctrine,” he writes, “its acceptance by Court after Court, and the fact that it has survived attempts to overturn it by amendment all will make it a ward of stare decises, safe even from liberal courts.”

Getman is a brilliant and accomplished legal scholar. I’m just an organizer who argues with lawyers a lot. So, with respect, I don’t see a substantial downside to trying. It was the dogged pursuit of anti-union lawsuits by the right-wing—often, initially, unsuccessful—that helped make Mackay precedent, as well as brought us on the verge of outlawing neutrality agreements and outlawing the union shop in the public sector. It is time that we launched a sustained counter-offensive in the courts.

And what about striking workers who do lose their jobs under the current doctrine? Who could argue against taking every step imaginable to restore their rights and their livelihoods?