When the Hell Did the NLRB Become More Activist Than Labor? 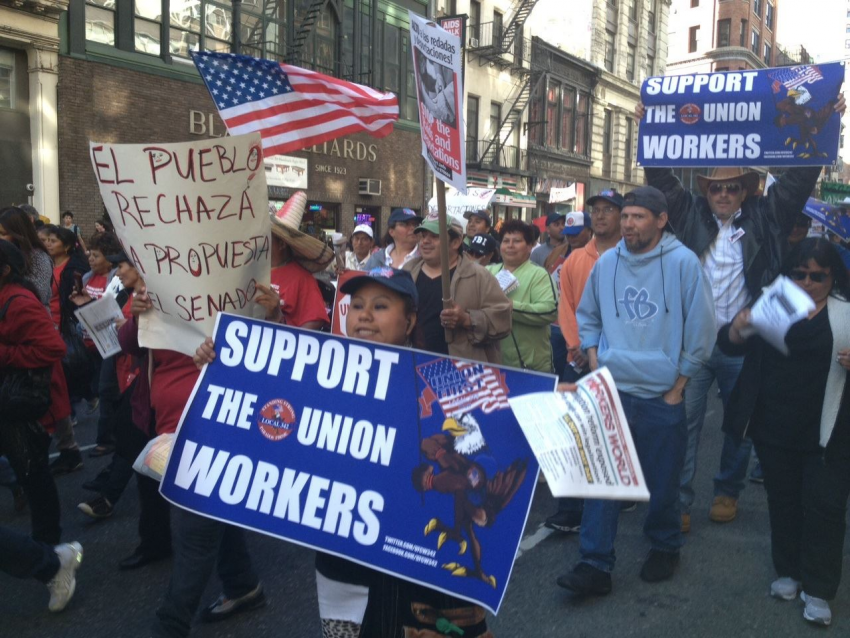 When the hell did the federal government get bolder than most labor unions about asserting the legal rights of workers?

On Monday, in a 3-1 ruling, the National Labor Relations Board (NLRB) reversed a Bush the Younger-era precedent that gave employers a say over whether temporary and subcontracted workers can be included in the same bargaining unit as the regular, full-time employees with whom they work beside. Go figure, most employers said “no” to the proposition that people who work shoulder to shoulder, but are paid from separate checkbooks, could bargain together in the same union. But the new Miller & Anderson, Inc. decision could force subcontractors to bargain with a certified union over the wages and working conditions determined by the controlling employer.

The ruling comes hot on the heels of the Board’s American Baptist Homes decision. That case re-established a balancing test for whether a boss’ employment of permanent replacement strikers is actually motivated by a desire to bust a union —which goes a long way towards restoring a legal right to strike.

And, of course, the Board’s attempt to expedite representation elections by holding frivolous management objections in abeyance until after the workers vote nearly broke the Congress. (Seriously, if you want to drink some delicious boss’ tears Google “quickie NLRB election.”)

As veteran union organizer Stephen Lerner succinctly puts it, “Unions have been significantly hobbled by the legal regime, and a lack of imagination to challenge it.” I have advocated that unions should pursue an agenda of judicial activism. These recent NLRB actions prove that the time is ripe to challenge the rules of the system that keep unions shackled. I’ve spent most of my career complaining about how slow and ineffective the NLRB is, as have most union organizers. That bias should not blind us to the opportunity of the moment.

After eight years of a Democratic administration, and—with the implosion of Trump’s GOP—the reasonable expectation of at least another eight years, we finally have a labor board that will no longer shrug and sigh that it “is what it is” when it comes to the unfair rules of the system.

But are union leaders and staff bold enough to reject the “is what it is” mentality? There’s an analogy that makes the rounds in Cornell University’s labor extension programs. It involves a man sharing his grandma’s pot roast recipe with a friend. The first step of the recipe calls for cutting the ends off the raw rump, which prompts the friend to ask, “Really? Does that, like, make the roast more tender … or what?”

The man sharing the recipe, who had never questioned why it called for the ends to be cut off, calls around to his parents, siblings and aunts and uncles to find out why grandma’s recipe does so. Finally, he gets his grandma on the phone and she says, “Oh, that’s because the grocer only sold rump roasts that were too big for our roast pan.”

This is the most devastatingly on-the-nose analogy for how unions engage in long-term strategy. We hope and assume that sometime in the past, someone smarter than us considered all the possible options and settled on what we are currently doing as the best possible choice.

A good case in point is employers’ “right” to force employees to attend mandatory anti-union “captive audience” meetings during a union organizing drive. Most organizers accept that it “is what it is”—another fucked up way that NLRB election rules are rigged so that unions lose a ton of representation elections. (Although, it should be noted that unions used to lose half of all representation elections during the Clinton I-era and now tend to win about two-thirds of elections, thanks partly to more strategic organizing choices and partly to the NLRB’s recent return to its historic mission of encouraging unions and collective bargaining.)

Meanwhile, apparently, the NLRB has been on the record for half a century as inviting unions to make a case that there should be some kind of equal access standard for unions if an employer forces workers to attend mandatory meetings on the subject of union representation. A group of 106 leading labor scholars, led by Charles Morris and Paul Secunda, have filed a petition at the NLRB to re-establish just such a rule.

The speculation is that the NLRB is unlikely to act on Morris’ and Secunda’s petition, as it prefers to act on union (or employer) initiated procedural cases. The Miller & Anderson decision came in response to a union representation petition; the American Baptist Homes decision in response to an unfair labor practice charge. To win equal time, a union will have to file exceptions to a losing representation election in which the employer made use of mandatory captive audience meetings. Surely, and sadly, someone reading this article has recently lost an election under such circumstances, and can take the initiative.

Similarly, most unionists just accept that an employer has a “right” to permanently replace striking workers. For example, Jane McAlevey, in her organizing memoir Raising Hell (and Raising Expectations), incorrectly chalks it up to a law signed by Ronald Reagan. It wasn’t. It was a poorly decided 1938 Supreme Court case that was dusted off in the 1980s. Like referees in a schlocky Hulk Hogan wrestling match, Reagan’s NLRB appointees looked the other way as employers engaged in a coordinated union-busting drive that weaponized the unfrozen caveman Supreme Court precedent.

After an unsuccessful attempt to legislatively ban permanent replacements during the first Clinton era, most unions seem to have shrugged and accepted that workers can legally lose their jobs for striking—that is until the NLRB reverted to the pre-Reagan rules.  But the Board can go further. The crucial phrase in that 1938 Court decision, NLRB vs. Mackay Radio & Telegraph Co., is that an employer can hire permanent replacements if it is necessary “to protect and continue his business.”

In other words, to meet the Supreme Court standard, the NLRB could force Verizon or any other Fortune 500 company to prove that they would otherwise go out of business unless they can hire scabs to steal the jobs of their striking workers. Good luck with that. Unions should get in the habit of filing unfair labor practice charges any time a boss advertises for scabs.

The NLRB even potentially has the power to reverse “Right to Work.” The statutes, passed on a state-by-state basis, aim to prevent unions from collecting fees from all of the workers they are legally obligated to represent. But the federal law that allows “Right to Work” statutes has, until recently, faced very few judicial challenges. One open question is whether the legislative intent of the Taft-Hartley act was merely to ban union membership as a condition of employment—not whether unions could negotiate mandatory fees for grievance representation services. Seattle University Associate Professor of Law Charlotte Garden notes that the NLRB could approve such a formula, and has indicated openness to cases arguing for it.

Tom Perez, the current Secretary of Labor, is apparently a bit notorious for noting exactly how many days the Obama administration has left (191, as of today) to make any gains for working Americans. Perez, who has milked every ounce of executive authority that his department has in the pursuit of that goal, is most well known (on Wall Street, at least) for getting Obama to sign an executive order that extended overtime protections to salaried workers earning less than $47,476 per year (up from the mid-1970’s standard of $23,660). In so doing, he won a pay raise, or reduction in hours, for millions of working Americans. And for that mitzvah he is reportedly on the shortlist for Hillary Rodham Clinton’s vice-presidential pick. And, honestly, choosing Perez is Clinton’s last chance to disprove Erik Loomis’ contention that she’s “a Martha Coakley-level campaigner with a once-brilliant campaigner for a husband.”

If labor leaders allowed themselves enough optimism to last not just until the end of Obama’s term but to anticipate at least another eight years of a Democrat in the White House, while maintaining the urgency with which Secretary Perez conducts himself, imagine what we could win for working families. If I didn’t mess up my math, that means we have at least 3,115 days left of an activist, majority-Democratic NLRB with which to press our case for a restoration of workers rights.

Because here’s the thing: challenging bad labor law involves breaking the law. When unions violate the law in pursuit of a voice at work for unorganized workers (by, say, engaging in solidarity boycotts, waging partial strikes or making “permissive” community goals their essential bargaining demands), the NLRB is the sheriff that is tasked with taking them to court. Is it crazy to think that this NLRB might treat bad labor law the way that Obama’s Justice Department treated the Defense of Marriage Act? In the court because they have to be, but conceding that the law is unjust?

Grandma’s pot roast recipe should be revised for our newly remodeled kitchen.