This is Huge: NLRB Rules Graduate Student Workers Can Unionize 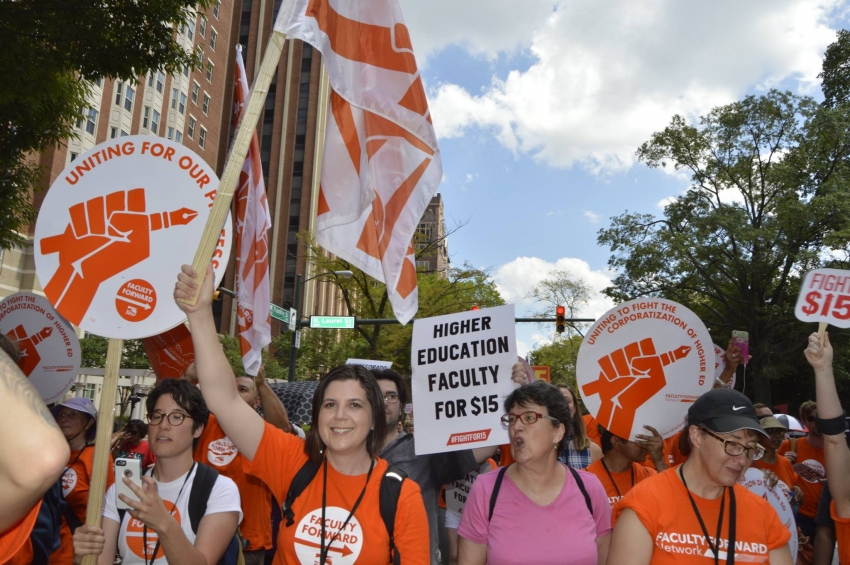 The NLRB has shifted back and forth over the past several decades on issues regarding who, among all the people on a university campus, is a worker and thus has the right to organize a union. (SEIU Faculty Forward/ Facebook)

In a strongly-worded opinion released Tuesday, the National Labor Relations Board (NLRB) ruled that teaching and research assistants at Columbia University and at other private institutions of higher education have the right to organize unions and collectively bargain with the universities that both employ and teach them.

The three Democratic NLRB members wrote that even if students are enrolled in the university to educate themselves, they also meet the definition of an employee—working for pay to do what someone else wants them to do. Thus, they should have the same labor rights as any other employee, the members wrote. (The lone Republican member dissented; one seat is vacant.)

The ruling also emphasized that the aims of the National Labor Relations Act (NLRA) were broad—to encourage workers to organize and bargain collectively—and that the definitions of employer and employee are broad. As a result, the ruling read, “it is appropriate to extend statutory coverage to students working for universities covered by the Act unless there are strong reasons not to do so.”

The decision is a major victory for graduate student employees and the unions that want to organize them. Graduate students at some public universities already have the right to form unions under state law, but the ruling clears the way for campaigns to move forward at Duke University, Northwestern University, American University and other private institutions.

Shortly after news of the NLRB decision broke, the Service Employees International Union released a statement that cheered the ruling.

“SEIU members in every industry are coming together to ensure that our broken higher education system will not derail the next generation,” said SEIU President Mary Kay Henry. “Restoring the rights of graduate workers is a critical step in ensuring that those on the front-lines of teaching and researching at colleges and universities have a voice in improving higher education for all of us.”

The NLRB has shifted back and forth over the past several decades on issues regarding who, among all the people on a university campus, is a worker and thus has the right to organize a union. In its decision in 2000 regarding New York University (NYU) teaching and research assistants, the NLRB decided that working as a TA or RA looked like many other “common law” employment relationships. Therefore, they should have the right to form a union and to bargain collectively, the NLRB said.

But four years later, looking at Brown University, the Republican-leaning majority argued that the NLRA was intended to cover “economic,” not “educational,” activities, and overturned the NYU decision. (The administration there then voluntarily agreed to recognize the union). In its rejoinder to the authors of the Brown decision, the current NLRB majority, reviewing the evidence from Columbia, said that treating teaching and research assistants as workers best fulfilled the intentions of the NLRA. Also, the NLRB wrote, just because work could be educationally useful did not mean it was not, as well, a job.

The Columbia decision could be important in several ways beyond the obvious potential for graduate student organizing. Here’s how:

Organizing graduate student workers in both public and private universities has never been easy. But after Tuesday’s NLRB ruling, it’s more possible than ever before.