No Justice, No Peeps! Workers Walk Off the Job At Pennsylvania Peeps Factory 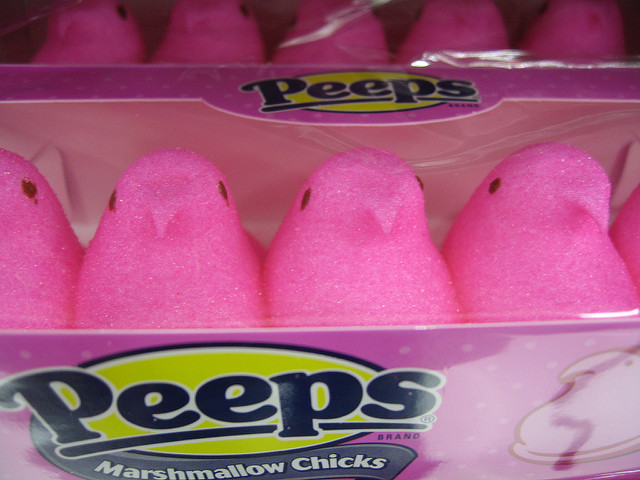 The Pennsylvania AFL-CIO has called for a boycott of Just Born products. (Daniel Spiess/ Flickr)

Workers employed by candy manufacturer, Just Born Quality Confections, in Bethlehem, Pennsylvania, are on strike over the company’s pension plan proposal. The strike, workers allege, hits the company—which makes Peeps, as well as Mike and Ike and Hot Tamales candies—just as next year’s Easter orders are meant to be made.

Roughly 400 workers walked off the job September 7, drawing a hard line against the company’s attempt to switch new hires to a 401(k), instead of the multiemployer pension plan that workers are presently a part of. They are represented by the Bakery, Confectionery, Tobacco Workers and Grain Millers (BCTGM) Union Local 6.

The company claims that it’s concerned about the pension plan’s long-term viability. The plan reported assets of $5 billion and liabilities of $8 billion, and projected insolvency within 14 years, according to the company. The union, however, counters that the company is not allowed to put pension details on the negotiating table, per pension fund rules. The company is pushing its plan as a part of collective bargaining negotiations for an agreement that expired in June.

“The company is growing,” says chief shop steward Keith Turner, a machinist with 21 years of Just Born experience, alluding to its claims of double-digit growth. “It’s kind of ironic that they would turn around now and tell us that they can’t afford anything.”

Workers additionally claim that if the move to a 401(k) plan for new hires were to go into effect, it would only further weaken the multiemployer pension fund, forcing the fund’s trustees to reduce retiree benefits.

Just Born did not respond to a request to comment, but it released a statement that read, in part: “Our proposal—to have existing associates remain in the current pension plan and to have future hires participate in a 401(k) plan—provides a respectful path that honors our current associates' existing benefits, and provides a sustainable retirement benefit for our future hires.”

“It’s the equivalent of—let’s say you signed a 30-year mortgage, and after 20 years you decide, you know I don’t want to pay this part of it anymore so I’m just not going to—and you just can’t do that,” Turner tells In These Times.

The Pennsylvania AFL-CIO has called for a boycott of Just Born products.

While this is the first strike at a Just Born facility in decades, this is not the first time the company has attempted to impose a change in pension plans, according to union officials. Last year, the company implemented a final contract including the same 401(k) plan proposed at the Bethlehem plant, after declaring an impasse in its contract negotiations with the roughly 35 workers at its Goldenberg's Peanut Chews factory in Philadelphia. BCTGM challenged the change with the National Labor Relations Board but was denied, leading the union to take the matter to federal court in a case that is still pending, a year and a half later.

Since workers voted to strike, they have tried to keep up morale. An unfair labor practice charge was filed by Local 6 after allegedly discovering that an individual affiliated with Just Born contacted striking workers, posing as a union official, telling them to return to work. The complaint, filed with the National Labor Relations Board, is pending.

Another, more public, company action that is causing substantial worry among striking Just Born workers is the hiring of replacement workers at the facility, with about 175 reportedly attending a job fair and another 600 applying for jobs online. As of press time, both sides have agreed to come back to the bargaining table alongside a federal mediator this week.