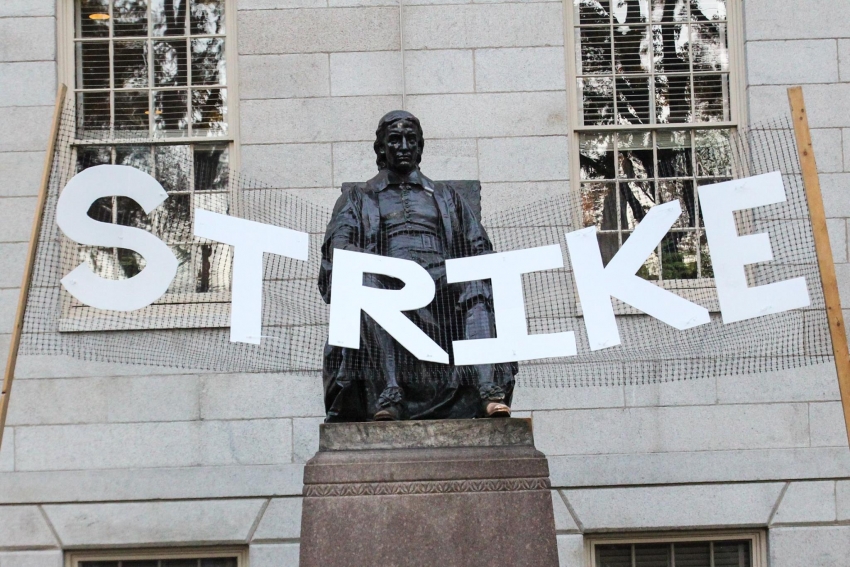 Students, neighbors, and alumni have been showing their support at campus rallies and on social media. (UNITE HERE Local 26/ Facebook)

This article was first posted at Labor Notes.

On October 5, instead of setting up breakfast for thousands of college students, 700 cafeteria workers at the richest university in the world kicked off their first strike in three decades.

Though their average wage is $22 an hour, workers say it’s a struggle to get by during summer breaks, when they’re out of work or forced to rely on lower-wage temp jobs. They say university administrators are unconcerned about the situation.

“Their attitude is ‘go find another job,’” said pantry steward Anabela Pappas, who has worked on the campus for 35 years. But “nobody wants to hire you for three months.”

The strikers, members of UNITE HERE Local 26, set up 6 a.m. pickets at the freshman dining hall, which serves 1,600 students each day. Five hundred workers, students, and community supporters picketed different campus sites, then merged for a march and rally. Strike chants are in three languages: English, Spanish, and Portuguese.

To feed students during the strike, it’s rumored that the university has brought in high volumes of frozen food. “Students say they want cooked meals, not frozen stuff or fried food,” said Pappas, who was thrilled with the outpouring of student support on the strike’s first day. “We got more than 700 flowers from the students—they brought us fruit, food, water, and lots of hugs.”

In 19 negotiating sessions since May, even with the help of a federal mediator, the union and university administration couldn’t reach a deal. In September, workers voted 591-18 to strike.

“Other Harvard workers have consistently demonstrated that they are with us,” said UNITE HERE Negotiator Mike Kramer. “It’s only an isolated Harvard administration that’s standing against the workers.”

With a $36 billion endowment and a $63 million operating surplus in 2015, Harvard can’t claim financial hardship. The university recently raised $7 billion in the first three years of a five-year capital campaign.

But factoring in that most workers are laid off for the summer and January when the university scales back its services and classes, their average yearly take-home pay is only $32,000. And while employees are out of work, they can’t collect unemployment.

Some employees work nine months out of the year, said 13-year employee Kerry Maiato. Others work as little as seven months.

Dining workers are demanding a $35,000 minimum yearly salary, and pressing the university to offer solutions. One approach would be to provide similar work for equal pay during the summer, when the campus is open albeit with scaled down activity. Another alternative would be to boost the hourly wage to help workers save up for the dry months.

Pappas works as a temp for campus mail services over the summer—earning $8 an hour less than her job with dining services, and without holiday pay. Others temp for Harvard’s real estate office, where they also make much less. “I feel like we are rented out,” Pappas said, “doing the jobs their employees do so they can go on vacation.”

“We’re told that we are all Harvard workers,” said Pappas, “but we don’t feel that way when we don’t get the same pay or when on the Fourth of July we don’t get paid.”

Dining workers also want to stop the administration from raising their health care costs, already at $281 a month for the most common family plan, according to university data.

“For the increases they are asking, it’s not sustainable for my family,” Maiato said, “especially in the city of Boston. It may not seem like a lot to the administration, but it does to folks who don’t work year-round.”

Students, neighbors, and alumni have been showing their support at campus rallies and on social media. The Cambridge City Council has voted to endorse the workers’ demands. So have Harvard’s Undergraduate Council and the Crimson, the campus’s daily newspaper.

“I think people are in shock that Harvard is doing this,” Pappas said.

Local 26 held a rally and picket for a fair contract before the spring semester wrapped up. Over the summer, even though most members weren’t working on campus, 600 signed pledges to strike and took photos of themselves for a 120-foot mural.

Workers unveiled the mural at their September 7 announcement that they were preparing to strike, and again at the September 15 strike vote.

“All we are asking for is a fair contract,” Maiato said, “for Harvard to let us into their community.”