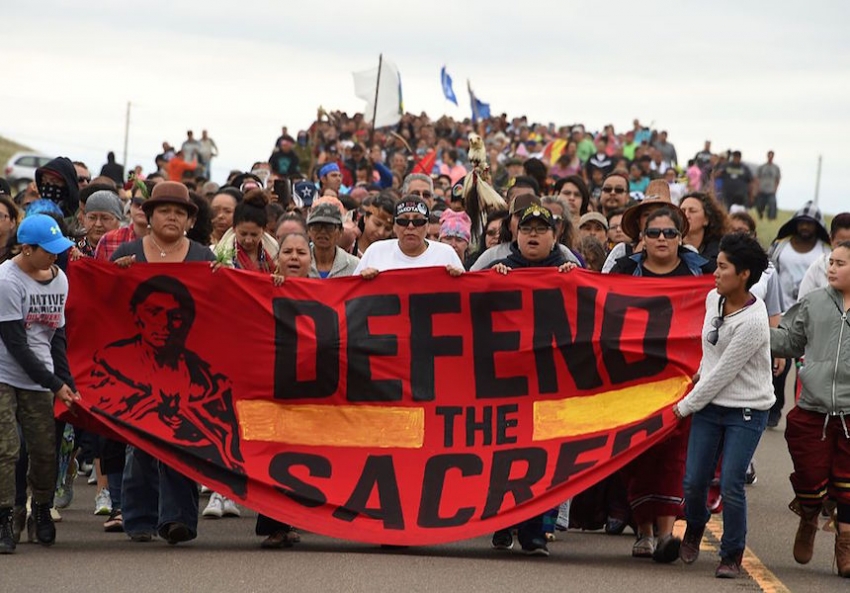 Terry O’Sullivan—General President of Laborers International Union of North America (LIUNA)—has few kind words for them. In a letter from late October, he called them “self-righteous,” “a group of bottom-feeding organizations” that “have sided with THUGS against trade unionists” and showed “a truly amazing level of hypocrisy and ignorance.”

“LIUNA will not forget the reprehensible actions and statements against our members and their families from the five unions listed above,” O’Sullivan warned. “Brothers and sisters, for every ACTION there is a REACTION, and we should find every opportunity to reciprocate their total disrespect and disregard for the health, safety and livelihoods of our members.”

But will union leadership take “ACTION” against its own members, many of whom are bucking O’Sullivan’s position and choosing to stand with Standing Rock? The fight against the Dakota Access Pipeline is creating and revitalizing alliances between indigenous communities, greens and labor. In short order, these newly strengthened ties could have a significant impact on the energy industry and the next president alike.

In Madison, Wis., LIUNA-City Employees Local 236—a LIUNA local—unanimously passed a resolution in support of water protectors at Standing Rock and against the Dakota Access Pipeline, citing their belief that “there would be more and better sustainable jobs if we invested in other types of energy that were not fraught with so many accidents.” Local 236 also sent a delegate, Chaous Riddle, to North Dakota for an October 29 convergence of the newly formed group Labor For Standing Rock, which has launched what they hope is a permanent union encampment within the larger Oceti Sakowin camp.

Asked if her local is expecting blowback from LIUNA leadership over the decision, Riddle says, “We’re expecting to get that anytime,” though exactly what that reaction will look like is unclear.

Riddle was one of several thousand protestors, many of them public sector workers, to help occupy the Wisconsin state capitol in 2011, a response to Gov. Scott Walker’s ultimately successful attempt to enact sweeping anti-union measures. “[Standing Rock] really wasn’t that much different from the protest in the capitol five years ago, where we had people from all walks of life coming,” Riddle says. “People were giving, and everybody was kind-hearted. If somebody was hungry we fed them. If they were cold we gave them a coat.”

“At first I got a lot of flak because I was wearing my LIUNA shirt,” Riddle says, though fellow campers warmed upon realizing she was there to join water protecters, not berate them. Riddle has recruited more Madisonians to travel to Standing Rock in the coming weeks. “We took a pledge when we were all in Wisconsin to all be a part of a Wisconsin union,” she tells In These Times. “So in my book everyone we’re sending out to Standing Rock is part of the Wisconsin union.

This is far from the first intra-labor conflict over fossil fuel infrastructure, and the sides can seem almost predictable: A handful of small and reliably progressive unions against the building trades and the AFL-CIO’s top brass. And while SEIU’s support for Standing Rock’s water protectors has helped tip the balance, the dissent among rank-and-file members of LIUNA and other building trades unions may point to a larger shift in the old “jobs versus environment” debate—both in terms of how workers relate to environmental issues and to their unions’ leadership.

Among fellow LIUNA members in Madison, Riddle says, supporting the water protectors makes obvious sense. The Badger State’s capital sits between two lakes, and the city has long regulated things like how much salt it deploys on roads during snowy winters, to protect the city’s water supply. “We want clean water,” Riddle said. “My guys understand that if the water’s poisoned they’re not going to be able to fish and hunt.”

“Our hope is that other unions will follow. … If we get more locals to follow us, we can change the head honchos,” she says, adding that she has spoken with LIUNA members in other parts of the country.

Liam Cain, of LIUNA Local 1271 out of Cheyenne, Wyo., was in Standing Rock with Riddle and the rest of the Labor For Standing Rock delegation. While his main job now is fighting forest fires on federal land, he still picks up occasional work from LIUNA, and spent years building pipelines through the union. Also a member of the Industrial Workers of the World’s Environmental Unionism Caucus, he says it was “the blatant racism involved in [what’s happening in Standing Rock] that was the catalyst for me [to go] from being uneasy, to not being able to support these projects in general.”

Cain says he is “deeply ashamed and disgusted” of his union’s position on the pipeline, and has “very little respect for the heads of LIUNA. … I think these are very top-down statements that are not reflective of the membership.”

In addition to pipeline and refinery workers, LIUNA also represents workers in the clean energy economy, and its members sometimes flow between jobs building pipelines and those erecting wind turbines. The issue, says Cain, is that the green jobs through LIUNA are often worse than those that “pillage the earth,” as he puts it.

“When I worked on a natural gas pipeline, that was the best income I ever made,” he says, noting that working 8 months could earn him as much as $52,000, plus generous benefits and health insurance. The work was long—10- to 12-hour days, 6 days a week—but reliable, and even when work was delayed a healthy paycheck would come through.

Conversely, Cain says, “If I worked through LIUNA on a green project it was very tenuous whether I could pay my bills or not.” While other factors exist, Cain credits part of the precarity of wind work to LIUNA leadership, eager to enter the green jobs space but not as willing to negotiate strong contracts. “There’s a lot of noise around green energy and green construction, and LIUNA and many other building trade unions want to be on the right side of that.” But, he argues, “they’ve been conciliatory with the windmill companies.”

This disparity, according to Cain, is part of what leads some pipeline workers to vote for Donald Trump. He says that they are in a prime demographic for Trump: Largely straight, white men “who make more money than other people. It’s mostly not poor white people who support Trump,” he observes, but “people with a little bit to lose.”

Amplifying Trump’s appeal is the fact that—while all construction work is temporary—pipeline work is temporary in a more fundamental sense. The urgency of climate change mandate that the whole industry be phased out, ideally within the decade. By not acknowledging the problem, Trump would keep those jobs around.

The phenomenon isn’t specific to this year’s GOP nominee, however: “A lot of union people vote Republican because Republicans don’t legislate extractive industry as much,” Cain adds. Many—Cain included—have grown disillusioned with Democrats “who haven’t done shit for us.”

Key to channeling that disillusion toward progressive ends, he says, is recognizing a shared goal: well-paying union jobs and a livable planet. Clinton’s plan includes investing in infrastructure and transitioning coal miners into new jobs, but relatively little attention is paid to how she will ensure workers in other extractive industries end up in high-quality jobs.

If Cain’s experience is indication, Democrats hoping to pull pipeliners in from across the aisle should work to make existing green jobs into good jobs, and help build the political will for a just, unionized transition away from fossil fuels.

As the most recent rounds of leaked emails from the Hillary Clinton campaign show, construction unions have held a powerful sway with the candidate before. It was in front of the Building Trades Union that she unleashed some of her most impassioned defenses of natural gas, pipelines and fracking, saying that “keep it in the ground” activists should “get a life.”

Labor for Standing Rock is showing that if Clinton hopes to maintain the support of the rank-and-file, she’ll have to change her tune. If she wins Tuesday, workers, environmentalists and Native people will be pushing her to “make a just transition more than just a set of academic talking points,” as Cain says—whether LIUNA leadership likes it or not.