Stop Blaming Immigrants and Start Punishing the Employers Who Exploit Them 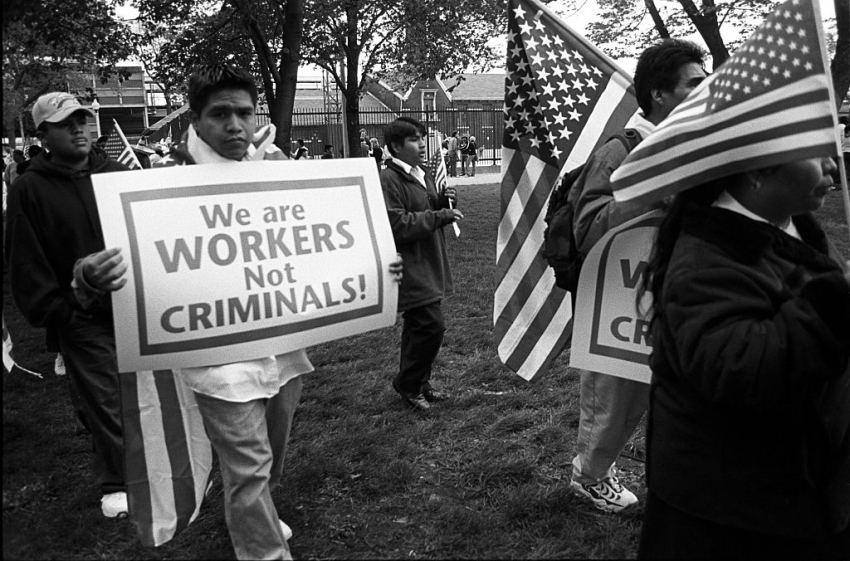 Trump can build his wall, but so long as there are employers seeking to profit, illegal immigration from all nations will continue to be a problem. (Photo by Steve Schapiro/Corbis via Getty Images)

"All of us assign blame in our own best interest—blame is relative. So one of the most important functions in society is controlling the blame pattern. Why is it that [the working class] assign blame downward to some welfare chiselers down at the bottom, "Tryin' to get a little somethin' for nothin'"—and they never assign blame upward to a handful of big-time chiselers who get a whole lot of something for doing nothing at all?" -Utah Phillips, labor activist and folk singer

Illegal immigration. It's apparently one of the key issues that moved the working class electorate to vote for Trump, so I feel compelled to offer my two cents on the subject based on my own thoughts and experiences.

It's not a terribly well kept secret to anyone who has ever travelled across Iowa and passed the heavy noxious air of a hog confinement along the interstate, that Iowa has more hogs than people. It's always been that way. The Midwest I call home has long been a bastion of all things agricultural; of corn and beans and hogs and cattle, and all of the industries that spawn from them.

In the 1970's, long before we had rounded up all of our free range pigs and chickens and crammed them into huge stinking corporate confinements, the Midwest was also home to much of the nation's meat packing industry.

The industry had come a long way from Upton Sinclair's eye opening account of it in The Jungle too. By the late 1970's the packing houses of the Midwest were almost exclusively unionized establishments, and as the old men used to say, you had to wait for somebody who worked there to die and inherit a job from them if you ever wanted to get in on those good union wages and benefits.

While by no means rich, the meatpackers of my youth were successful blue collar men and women. Their children went to college. If they fished they owned boats. And if they were wise with their money, they even had a little cabin down by a lake somewhere. And then Reagan happened, and PATCO.

It must seem to people outside of the labor movement like we hate Reagan just because he was a Republican, or we are overly sentimental about a relatively small group of 12,000 striking air traffic controllers being fired and replaced by him. But that isn't the case at all. In fact, the Teamsters and others actually endorsed the man and in the grand scheme of things, PATCO was small potatoes for organized labor. What happened in its wake however, sent seismic ripples throughout the land that led to an anti-union tsunami that labor has never fully recovered from.

There have always been strikes. Always. And there were always attempts by employers to break them. Labor history even tells us stories of times when employers would attempt to bring in strike breakers from the deep south. And there are uplifting accounts from those same annals of forward thinking organizers and organizations who organized them as well.

But 1981 changed the rules of the game, and when meat packing houses had strikes soon thereafter, some CEO or company president got the bright idea of recruiting strike breakers from the poor Mexican countryside. It wasn't a particularly novel idea for any era, but the difference is that in the 1980's under a Reagan administration, nobody said a word. Even the employers were surprised. Over the course of the next decade, the entire industry followed suit and a pattern occurred that you could set your watch by.

Contract time would come up and the company would demand huge concessions they knew the workers would never accept. The union would go on strike. The company would send recruiting agents to the Mexican countryside, and right out of the pages of John Steinbeck's The Grapes of Wrath, if they needed 500 workers, they would advertise for 5,000.

Overnight, Midwest communities would be overrun with hundreds of Mexican replacement workers. And just for good measure, to make sure that no claims for old pension promises hung over their heads, the company would shutter their entire operation and reopen either across the street, or under another name in a corporate shell game. And nobody in the era of deregulation and Laissez-faire economics ever said a word about any of it or did anything to stop it. Fast forward another decade and they began calling them jobs that Americans wouldn't do anyways.

Then, they started showing up in other industries. When I came onto the scene as a construction worker in 1990, my Laborers Union Hall in Des Moines, Iowa had become the quintessential model of historical irony, with Blacks, Irish, and Italians all standing arm in arm chanting about Hispanics that "we don't want those fucking people in our union!"

I saw them from a distance. I eyed them on jobs across the street from mine with suspicion and contempt. We could feel the noose tightening on our ability to protect our work, and I could see the workers on surrounding jobsites who were obviously to blame for it.

A number of years later I had my first real eye opening experience when two Spanish speakers came into the union hall pointing at a piece of paper. I called a Mexican staffer I knew and he translated over the speaker phone. The paperwork they were showing me were check stubs. There was a line for their pay of $7.00 per hour (union scale at the time was around $18). There was a line item for a deduction for tools they were being charged to use they had never received. And there was a line item for union dues being deducted. Their pay after deductions was around $4 per hour, less than the minimum wage. A co-worker had just fell and been seriously injured and the company owner dropped him off outside the emergency room, returned to the jobsite and fired the other two.

This played itself out a million times around the country. Wherever illegal immigrants can be found working, there are employers who use them to skirt every labor protection. Female employees are raped. Workers are cheated. And workers are routinely injured and killed. And no one ever talks about any of it. There is never a thought given to actually punishing the people who employ them. Ever.

Trump can build his wall, but so long as there are employers seeking to profit, illegal immigration from all nations will continue to be a problem. We, as Americans, blame immigrants for taking our jobs. We blame them for using benefits that come out of our tax dollars (even if social programs are only a tiny budgetary sliver, and even if the majority of them pay into social security for benefits they will never be able to collect AND pay more in payroll taxes than Donald Trump has in the last twenty years). And we even blame them for the rising cost of healthcare for those times their employers dump them off at the emergency rooms.

But no one on the right or even the left ever talks about the one thing that could really end the problem. Imprison the employers who import, hire and exploit these workers, and all of it would end. You wouldn't need to build walls (and good luck building a wall in Southern Texas without using immigrants to build the thing anyways). You wouldn't need an army of ICE agents sweeping into homes and businesses to round up and detain immigrants. You wouldn't need any of it. Lock a handful of employers up, and all the rest would fall in line. The border crossings would fizzle out and many of the people would leave on their own.

Drug dealers do cross the border every day. "Bad hombres" come too. But the vast majority of the millions who have made the dangerous and costly journey come in search of opportunities. Often promised opportunities. And I can honestly say that if my own family suffered for the want of the basic needs of life and my children and grandchildren went to bed hungry each night, and there were no opportunities for me here and someone promised me a job with a good wage in Montreal, that no wall would be high enough, no desert would be wide or deadly enough, to keep me from the other side and the promise of something better for them.

Want to make America really great again? Stop blaming the people who have no control over the system and start looking at people who really do.

In the paraphrased words of Utah Phillips, "The world [as we know it] is not dying, it is being killed, and those who are killing it have names and addresses."