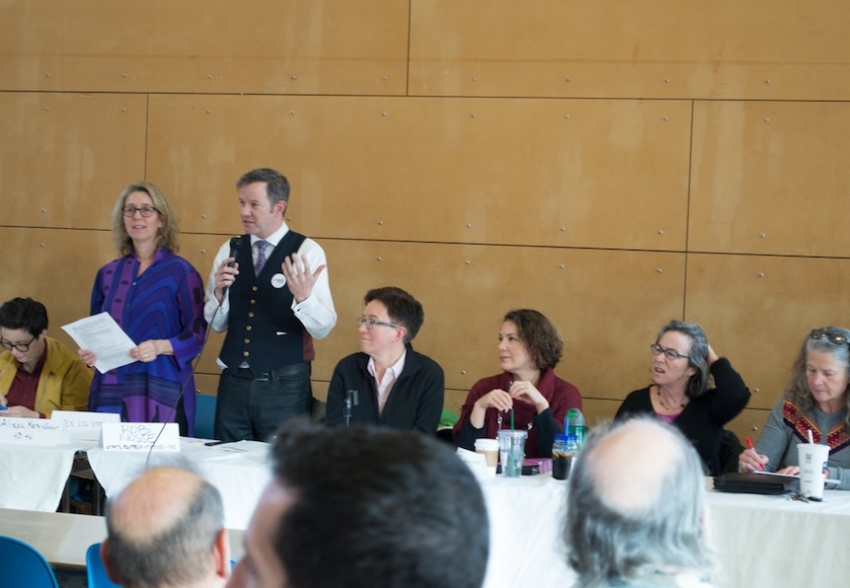 Rep. Rob Nosse, an Oregon Nurses representative who won a House seat in 2014, is a graduate of the Oregon Labor Candidate School. (Benjamin Kerensa/ Flickr)

Election night 2016 was bittersweet for me. I spent most of the day with Oregon legislative candidate Teresa Alonso Leon, a Service Employees (SEIU) member.

Alonso Leon worked for the state as a high school equivalency and GED administrator, helping students find their paths to careers, college, and job skills training programs. I had helped to recruit and train her through the Oregon Labor Candidate School, which offers union members the training and support to run for public office.

She was running for legislature to fight for a better public education system, one that supports teachers and classified employees. She herself did not complete high school, but went on to get her GED and master's in public administration—so she knows firsthand how strong schools and great educators can help immigrants like her.

And she won, just about at the same time that Secretary Hillary Clinton conceded to Donald Trump. There were tears of joy and pain, all mixed together.

Alonso Leon, already a representative on her city council in Woodburn—where over half the population is Latino or mixed-race—will be Oregon’s first immigrant Latina state representative.

A coalition of public- and private-sector unions created the Oregon Labor Candidate School in 2012. It’s an independent nonprofit, with a board of staffers and officers from unions representing nurses, firefighters, teachers, school bus drivers, electricians and other building trades, public employees, direct care providers, and professors.

Our goal is to build a bench of candidates who will stand up and fight. We want leaders throughout Oregon who will push forward policies like a $15 minimum wage, paid time off for maternity and elder care, paid sick days, strong labor agreements with developers, health care available to everyone, and so much more.

Plus, when union contracts come up for negotiation, it’s essential to have members on local city councils and school boards who can speak up for workers. Having a firefighter on a school board and a teacher on a fire board benefits all public-sector employees.

The school is just a few years old, but already this legislative session we will have three graduates serving in the Oregon House. We also have graduates on city councils, school boards, and special district boards around the state.

The school has one full-time staffer, and is funded almost entirely by its partner unions. Students raise 10 percent of the budget as part of their curriculum on fundraising. We offer our training and support to union members who want to create policies that will improve the lives of workers in our state.

There’s not always 100 percent agreement on which legislative policies to support, and our candidates don’t always go on to win the endorsements of all the partner unions. But by spending time with classmates from other unions, participants develop a heightened awareness of the values that hold us together, and of which policies different organizations prioritize.

A member who wishes to participate must be backed by someone in leadership from their union, usually a local president or business manager. Applicants are vetted and interviewed by the school’s staff and board, and up to 20 are accepted each year.

“I cannot imagine running successfully without having attended the labor campaign school,” said Rep. Rob Nosse, an Oregon Nurses representative who won a House seat in 2014. “The school gave me important tips and practice for raising money. It also helped me to be more prepared for the endorsement processes that candidates will go through with our unions and with other organizations.”

While learning the ropes as a freshman legislator, Rep. Nosse worked on many significant bills. He helped two senior elected officials from labor, Sen. Michael Dembrow (Teachers) and Rep. Paul Holvey (Carpenters) to pass a minimum wage bill. He also carried a bill to ban anti-gay conversion therapy, another one to phase out Styrofoam containers in schools, and a third to improve premium rate setting for our health care exchange.

Unless they have run for office before, most participants start off the class not knowing what they don’t know. Running for office is a huge and personal decision to make, so we give students time to process it and make sure it’s right for them.

We wrote our own curriculum, emphasizing campaign basics through a labor lens. The 48-hour course is broken into six classes over six months, covering six themes:

Our trainers come from a variety of unions and have diverse backgrounds, but all have run campaigns and gone through our 10-hour curriculum training. The trainers teach the core material, and guest speakers come in to share their experiences as candidates.

Each day focuses on a theme. The “endorsements” day, for instance, covers labor priorities and the endorsement process, and includes touring a training facility for one of our building trades apprenticeship programs.

If we do the training right, participants leave each session with more questions than they had when they showed up that morning. They start to think through which elected seat makes the most sense for their life, considering their incomes, job responsibilities, and personal passions.

They discover how much money past campaigns have spent, which seats were appointed, and which ones had tough races. Students discover how much there is to learn about the political landscapes of their districts.

Besides attending the trainings, each participant is required to do readings between classes, fundraise a minimum of $350 for the school, and canvass with a candidate at least once.

“Oregon Labor Candidate School allowed me to have confidence running for a seat that I was passionate about, with little funds and against big money,” said Cook, the SEIU member who joined the Salem City Council last year. “It levels the playing field for working people who want to run for local office and represent working-class interests in our community.”

We recruit applicants at political action committee meetings, conventions, board meetings, and labor picnics. But now that we have a solid network of 100 alumni from 20 unions, our alumni are doing our best recruitment. Each year we receive more and more applications from people who want to go through the training.

The 2016 election was a shocking reality check for many of us, with profoundly disappointing results at the national and state levels. But we also know that there will be another election in two years, and another two years after that. In fact, there are elections this spring, and next spring as well.

Although I enjoy canvassing for the current election, I’m generally thinking two to four years out. I think of the words of the Danish-American social reformer and journalist Jacob Riis, who crusaded against poor living conditions in New York City tenements a century ago:

“When nothing seems to help, I go and look at a stonecutter hammering away at his rock perhaps a hundred times without as much as a crack showing in it. Yet at the hundred and first blow it will split in two, and I know it was not that blow that did it—but all that had gone before.”

Sara Ryan is executive director of the Oregon Labor Candidate School. You can contact her at sara@oregonlaborcandidateschool.org.