BREAKING—Andrew Puzder, Trump’s Pick for Labor Secretary, Is Out 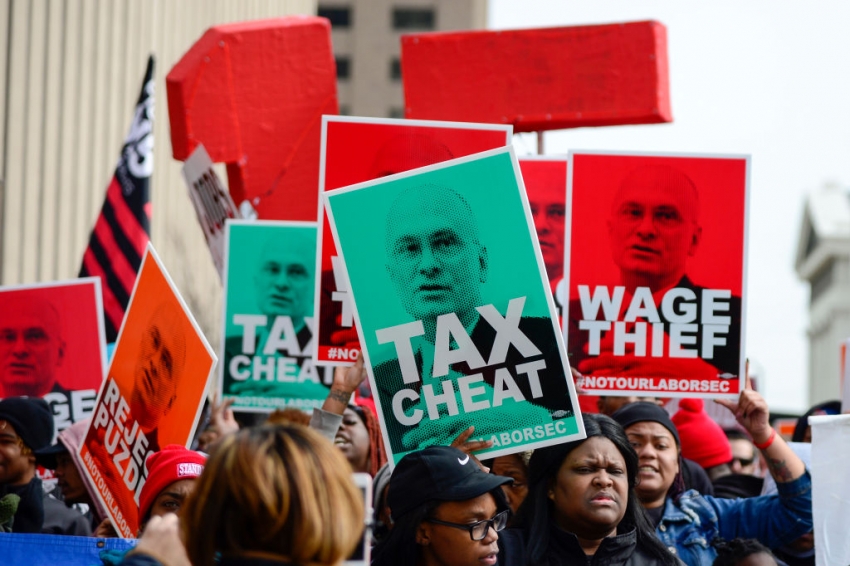 A lobbying effort aimed at convincing Republican Party senators to oppose Puzder was in full swing for the last week, including demonstrations Monday in more than 20 cities. (Photo by Jeff Curry/Getty Images)

Puzder decided to withdraw his nomination as the new chief of the largest federal labor agency as opposition spread from traditional pro-labor Democrats to include a handful of conservative Republicans.

“From the very start of the nomination process, it was clear that fast-food CEO Andrew Puzder was unfit to lead the U.S. Department of Labor. Thanks to fierce opposition from a diverse group of Americans, including people deeply concerned about the treatment of workers and of women, enough senators came to the same realization, forcing Mr. Puzder’s withdrawal from the nomination,” said Christine Owens, executive director of the National Employment Law Project.

It’s the first victory for Senate Democrats in opposition to Trump’s controversial Cabinet picks, despite well-organized campaigns against higher-profile nominees such as Attorney General Jeff Sessions and Secretary of Education Betsy DeVos. Nevertheless, a lobbying effort aimed at convincing Republican Party senators to oppose Puzder was in full swing for the last week, including demonstrations Monday in more than 20 cities.

The focus of the opposition was on Puzder’s tenure as chief executive of CKE Restaurants, owner of Hardee’s and Carl’s Jr. hamburger chains. Owens says CKE has a “terrible record” of wage law violations and employment discrimination complaints that disqualified Puzder from high government office. And Kendall Fells, organizing director for the Fight for 15 campaign, said “it would hard to imagine him even getting the nomination,” if there had been a serious examination of the extensive record of labor complaints against CKE beforehand.

But the anti-Puzder forces relied on a second level of criticism to cause a handful of Republican senators to join Democratic opposition, according to Fells. As part of the regular financial disclosure requirements for Cabinet nominees, Puzder revealed last week that he had employed an undocumented immigrant as a servant and failed to pay taxes as required by law. While his tenure at CKE may be viewed as unobjectionable by ultra-right conservatives, Fells said, Puzder’s disclosure showed that he is also a labor scofflaw in his personal life.

Aubrey Rejon, a former cashier at a Carl’s Jr. restaurant in Whittier, California, tells In These Times that she has been incensed by Puzder’s lawlessness—and by the willingness of Trump and other Republicans to excuse it. “It seems like they’ll just let anybody,” assume government office, even though they are admitted lawbreakers, she said this week, before news broke that Puzder would withdraw.

Rejon protested with about 200 others at the CKE offices in Anaheim on Monday and said she hopes the action will alert the public to the need for a higher minimum wage nationally.

“I was hired at $10 an hour and stayed that way,” she says. “Working conditions were atrocious.”

Owens, of the National Employment Labor Project, said that the confirmation hearing before the Senate Committee on Health, Education, Labor and Pensions originally scheduled for Thursday was expected to provide a dramatic confrontation between Puzder and his critics. Sen. Patty Murray (D-Washington) was to take the lead in questioning Puzder, Owens says, backed up by Sen. Elizabeth Warren (D-Massachusetts), who released a blistering 28-page letter earlier this week laying out the case against Puzder. The hearing has since been canceled.

Further drama came in the form of a videotape of an appearance by Puzder’s former wife on Oprah Winfrey’s television show. The 27-year-old tape shows Lisa Fierstein recounting charges of spousal abuse during the marriage. Although Fierstein long ago withdrew the charges, copies of the tape have recently surfaced and been viewed by some of the senators on the committee, according to press reports.

“The withdrawal of Andrew Puzder’s nomination is great news for everyone who wants an America where wages rise, benefits are strong and unions are growing,” said Richard Trumka, president of the AFL-CIO. “It’s a reminder of the collective power of working people and a clear message to President Trump that it’s time to change course completely, not double down.”