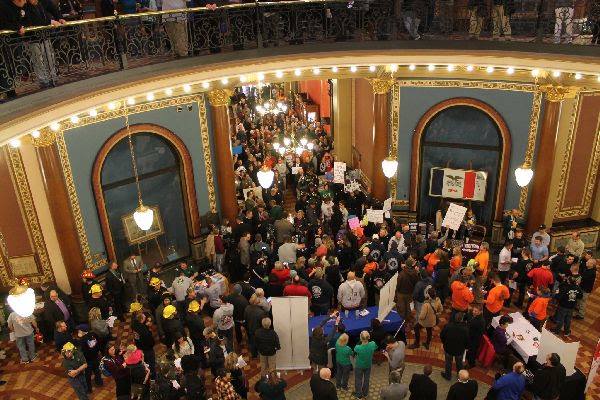 Both the House and Senate, which are controlled by the GOP, approved the bill Thursday, passing the most sweeping and impactful changes to Iowa law in decades. (Iowa Federation of Labor, AFL-CIO/ Facebook)

DES MOINES, Iowa – Lawmakers in Iowa have voted to dismantle the state’s 40-year-old collective bargaining law, dramatically weakening the power of public sector labor unions and leaving some 185,000 public workers unable to bargain over benefits, healthcare, vacations, retirement, and nearly all workplace issues outside of wages.

Iowa is a right-to-work state, and the new law would prevent voluntary union dues from being deducted from a public employee’s paycheck. It would also require regular recertification votes. Police officers, firefighters and transit workers are exempt from most of the bill’s provisions.

Republican lawmakers introduced their union-busting bill on February 7 and fast-tracked it through the legislative process. Both the House and Senate, which are controlled by the GOP, approved the bill Thursday, passing the most sweeping and impactful changes to Iowa law in decades. Gov. Terry Branstad is expected to sign the bill soon.

During the 10-day stretch before lawmakers voted, Iowa saw its largest labor mobilization in years, with thousands of union members standing up, speaking out and taking action. The weekend before Valentine's Day, workers and their families packed legislative forums and town hall meetings in districts across the state. Teachers and their allies rallied and marched at the state Capitol.

A union rally and public hearing Monday drew scores of demonstrators so dense that the Iowa Capitol was packed shoulder-to-shoulder on every floor. Firefighters wore their iconic helmets. Nurses showed up after their shifts in scrubs. Workers continued to pour into the Capitol for hours after the event started, with lines of people spilling out of the statehouse entrances. More than 4,600 people went through the Capitol security checkpoints, Radio Iowa reported. Thousands more Iowans flooded statehouse switchboards and lawmakers’ emails.

Minority Democrats in both chambers managed to briefly slow down the bill’s passage, extending debate over three days of marathon sessions and raising important questions about outside influence by corporate interests like the Koch Brothers, ALEC and Americans for Prosperity.

“We’re talking about people’s lives, their kids, and their homes,” said Candace Acord, an AFSCME member and community-based corrections officer from Iowa City. “I don’t understand what the problem is here when we just want health insurance for our families.”

“My main concern is insurance may now become so unattainable due to the cost that I may not be able to afford healthcare for me and my family,” said Lynette Halsted, an SEIU member and emergency room nurse at the University of Iowa Hospitals and Clinics. “Staffing ratios are no longer permissible subjects of bargaining, but evidence-based practice shows that the more patients a nurse has the worse the outcome can be for patients."

The nonpartisan Iowa Policy Project weighed in with a report on the impacts of the new law, stating it will:

“exacerbate existing trends—low and stagnating wages, growing uncertainty about access to affordable health care, and increasing income inequality—that are already accelerating downward mobility for many Iowa households. And these effects are likely to disproportionately harm rural communities, low-income workers, and to threaten the quality of the health care, public safety, and public education systems upon which all Iowans depend.”

Carrie Dodd, a junior high English teacher from rural Madrid, wrote: “My husband and I both work in school districts and we will be financially devastated if we lose our insurance, receive lower pay, and have to work more for less.”

The recent demonstrations highlighted the power, however diminished, that labor still has to educate, organize, and mobilize workers and their families, and the critical role unions play in bringing every day, regular people into social justice movements.

But the future of organized labor is now more uncertain than ever, and the path forward is unclear. Many workers at the demonstrations said they believe the next step is to re-elect Democrats into the majority in 2018. That task will be even more difficult now that Iowa’s public sector unions have been severely weakened, arguably the real purpose of the new law.

There is also no guarantee a Democratic majority would restore collective bargaining rights. Democrats controlled the Iowa Senate in 2013, and collaborated with a Republican governor and House Republicans to pass the largest corporate property tax cuts in state history, cuts which caused a budget shortfall that Republicans are now using to justify their attacks on labor. Unions were unable to expand their collective bargaining rights even when Democrats held a trifecta of political power in 2008.

But workers aren’t giving up.

“We will resist and persist in the face of these neoliberal attacks,” said Naoki Izvmo, a teaching assistant and UE-COGS member at the University of Iowa. “Workers are the true source of power in society, not the law.”