Even Trump Can’t Stop the Tide of Green Jobs 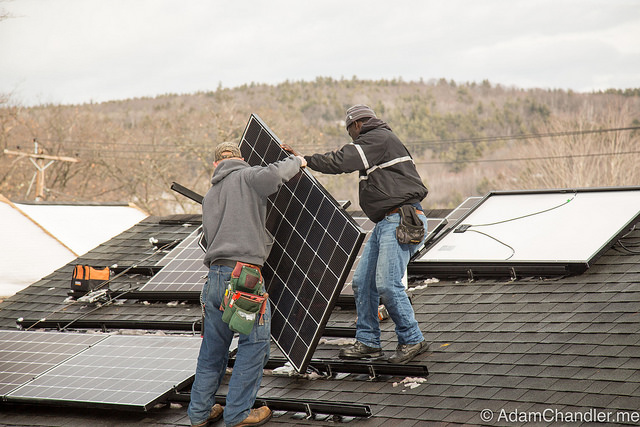 Unlike traditional manufacturing jobs, green jobs in the clean energy industry have been on a steady upward swing. (AdamChandler86/ Flickr)

Donald Trump was elected in November on a platform that included both climate denial and the promise of jobs for Rust Belt communities still hurting from deindustrialization. In the months since, his strategy to create jobs has become increasingly clear: tax breaks and public shaming of companies planning to move their operations out of the country.

Take the case of Carrier, a manufacturing plant in Indianapolis that produces air conditioners. Trump first threatened to slap tariffs on Carrier’s imports after the company announced it would move a plant to Mexico. Then, he reportedly called Greg Hayes, CEO of the parent company United Technologies, who agreed to keep the plant in the United States in exchange for $7 million in tax breaks. (Carrier later admitted that only a portion of the plant’s jobs would remain in the country.)

The company’s decision to keep jobs in the United States was declared a victory for the Trump PR machine, but it’s unclear that it can create a major change in access to jobs in the long-term. Hayes, announcing that the tax breaks would allow additional investment into the plant, noted that the surge of money would go towards automation. And with automation, eventually, comes a loss of jobs.

“Automation means less people,” Hayes told CNN. “I think we’ll have a reduction of workforce at some point in time once they get all the automation in and up and running.”

Unlike traditional manufacturing jobs, green jobs in the clean energy industry have been on a steady upward swing. This past spring, for example, U.S. jobs in solar energy overtook those in oil and natural gas, and a Rockefeller Foundation-Deutsche Bank Climate Change Advisors study found that energy retrofitting buildings in the United States could create more than 3 million “job years” of employment.

That means green jobs remain one of the key hopes for revitalizing communities. But can they move forward under a climate-skeptic and coal-loving president?

The Obama administration, for the most part, was a strong supporter of clean technology. In 2008, Obama wrangled tax credits for businesses that invest in wind and solar, which were extended in 2015 through 2020. The solar sector in particular saw huge growth. It grew 17 times faster than the overall economy in 2016, according to the National Solar Jobs Census, buoyed in large part by the 2009 stimulus funds that invested in solar energy.

Trump, meanwhile, has promised to place his investment in coal and oil jobs, as well as dismantle the Clean Power Plan that aimed to take on global warming by setting a limit on carbon dioxide pollution. The president has also declared an all-out war on regulation that encompasses rules designed to promote energy efficiency, a step that many see as the first volley in a war against green jobs.

It’s a bleak outlook, but experts say that even the wholesale destruction Trump threatens to bear on everything climate-related likely can’t entirely stop the growth of jobs in the clean energy sector (or unions’ efforts to organize those workers as the sector expands).

Joe Uehlein, founding president of the Labor Network for Sustainability, which seeks to bridge the divide between labor and the climate movement, says that Trump can’t singlehandedly stop the move toward wind, solar and geothermal.

One key reason that Uehlein and other analysts are still guardedly optimistic is that so much green energy growth happens at the state level. A December 2016 study by the Brookings Institute concluded that with little to no future buy-in from the federal government, states and localities would become increasingly important in turning the economy toward green jobs.

Uehlein says he’s already seen that happen successfully at the state level and that it’s creating good, unionized jobs. He points towards the country’s largest offshore wind farm that was approved in January 2017 and will help New York state get 50 percent of its power from renewables by 2030.

“Labor and the environmental community worked with offshore wind companies and made this happen,” he says, “and it’s the action at state and local levels that is driving this, even under Democratic administrations who have been far better about the environment.”

That reality could be complicated by red states with ideologies that steer them away from investments in environmentally friendly policies. For example, Indiana, Vice President Mike Pence’s home state, in 2015 attempted to add extra charges to the bills of people using solar energy. Tennessee’s bright sunshine hasn’t been captured by much solar power in large part because the state doesn’t have a renewable portfolio standard mandate that encourages utilities to use green power, as many other states that have benefitted from green energy do. Florida, meanwhile, banned the use of the term “climate change” in government communications, emails or reports.

But that doesn’t change that the interest in green jobs from voters is mostly bipartisan. Several polls in the last six months of Republican voters, many of whom backed Trump, have found support for renewable energy.

Dr. Daniel Kammen, director of the Renewable and Appropriate Energy Laboratory at the University of Berkley, created the U.S. green jobs model to understand the future of the green energy industry through to 2030. The study found that green energy could create millions of jobs.

“It’s a pretty simple call the Trump team will need to make. Do they hang on to the technologies of the past,” Kammen asks, “or do you get more jobs by investing in these new technologies?”

An existential threat to the environment and labor

While the green jobs industry may still grow, Trump’s presidency has created a broader existential crisis both for labor and the environment.

In a report released after his election, the Labor Network for Sustainability put forward a plan called “How Labor and Climate United Can Trump Trump,” addressing the fears that Trump would accelerate the march towards cataclysmic climate change and, in the process, bring about right-to-work laws at the federal level that would spell doom for unions.

Uehlein says that many unions have an “all of the above” policy that supports work in all forms of energy, not only wind and solar but also oil and gas and coal. That is a “recipe for climate disaster,” he says.

Instead, Uehlein argues that labor and environmental groups must put together an alternative agenda around jobs and transitioning to a clean economy, develop a stronger alliance, target Trump’s base to convince them of the troubling nature of his agenda for both labor and the environment and commit to working through the inevitable tensions that will arise, like those presented by the Keystone XL and Dakota Access pipelines.

Most importantly, the report notes, labor can’t support the parts of Trump’s agenda that it finds helpful, and ignore those that are harmful. Climate groups, meanwhile, can’t ignore the economic realities of the communities that voted for Trump.

The report makes its case: “If the climate protection movement wants to have a future, it will have to find a way to appeal to the alienated Trump voters that not only gives lip service to their interests but actually wins them over.” Labor, meanwhile must “use good, stable jobs protecting the climate to challenge the growing inequality and injustice of our society.”

This work was funded in part by the Social Justice News Nexus program at Medill at Northwestern University.