Labor-Clergy Coalition To March on Nissan Plant in Mississippi 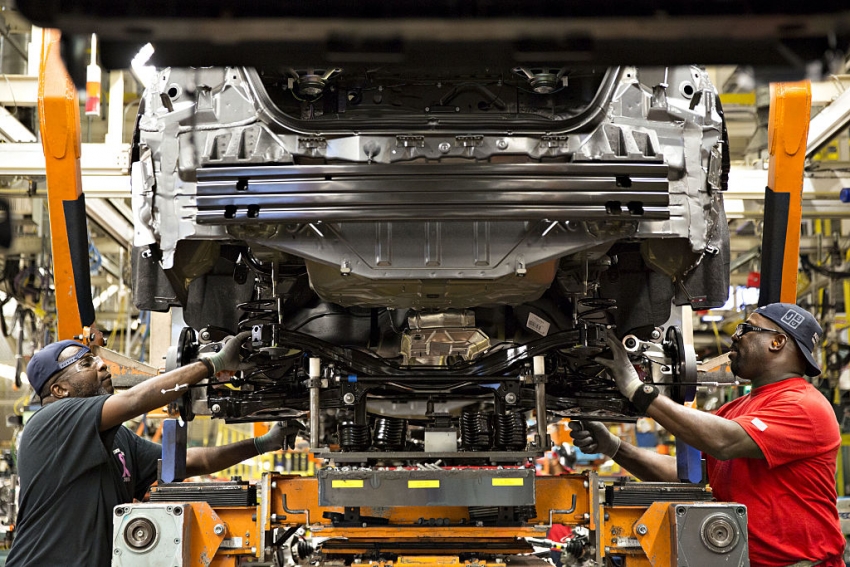 The action is organized by the Mississippi Alliance for Fairness at Nissan, a coalition of faith and civil rights leaders seeking to bring attention to Nissan’s labor practices. (Daniel Acker/Bloomberg via Getty Images)

The action is organized by the Mississippi Alliance for Fairness at Nissan, a coalition of faith and civil rights leaders seeking to bring attention to Nissan’s labor practices at the plant, where the vast majority of the 6,400 or so workers are African-American. The United Autoworkers Union (UAW) launched an organizing drive in Canton in 2012.

Specifically, coalition leaders want Nissan, a Japanese corporation in partnership with France’s Renault, to end what they claim are intimidation tactics against rank-and-file activists seeking UAW representation and curtail its use of temporary employees, who make up about a quarter of the total workforce.

They also want to help Nissan workers address concerns about safety and working conditions and the company’s arbitrary decisions on work shifts and hours.

Nissan has responded that its hourly wages are far above the average wage in Mississippi and denies the accusations of intimidation. It issued a lengthy statement to the media saying that allegations made about the company by the UAW are false.

“Nissan respects and values the Canton workforce, and our history reflects that we recognize the employees' rights to decide for themselves whether or not to have third-party representation,” Mississippi News Now reported the company said.

“We believe that just as Nissan and its Alliance Partner Renault respect the rights of workers in Japan, France, the United Kingdom, and across the globe, it must respect the right to organize of its workforce in Mississippi,” the Mississippi Alliance for Fairness at Nissan said on its website.

The Canton plant was financed, in part, with hundreds of millions in subsidies from the state and began operating in 2003. Workers at the plant make the popular Nissan Altima and several other cars and passenger vans, according to Nissan.

Nissan is the world’s fourth largest auto manufacturer and operates four U.S. factories employing more than 22,000 workers (the others are in Smyrna and Decherd, Tennessee). Globally, the Renault-Nissan Alliance makes about nine million cars a year, putting it behind market leaders Toyota, Volkswagen and General Motors. The company is also the largest automaker in Mexico, where half of its production of one million cars is exported to the U.S. market.

Trump and Abe on trade

But the struggle in Mississippi is not only about a giant multinational corporation. It also poses a direct challenge to two key elements of Japan’s massive economic engagement with the United States, where it ranks second behind Great Britain as a foreign investor, with a total of some $400 billion in direct investments.

First, the march will confront the virulent and historical opposition of Japanese auto makers to unionization at their American plants, a strategy that has driven most of their investments to Mississippi, Tennessee and other states in the U.S. South where right-to-work laws make it difficult to organize.

Trump, of course, is an economic nationalist who ran for office as a critic of Japanese trade practices, while Abe is a right-wing conservative eager to improve security ties with the United States. Since Trump’s election, the two leaders have met twice, once at Trump Tower in New York and again in February at the White House. Later, they played golf at Trump’s vacation home in Florida.

In January, Trump announced that the United States would withdraw from the Trans-Pacific Partnership (TPP), a free trade proposal that Abe had backed. In making the case against TPP, Trump sharply attacked Japan for not buying U.S. cars.

Japan, he said, does “things to us that make it impossible to sell cars in Japan, and yet, they sell cars into us and they come in like by the hundreds of thousands on the biggest ships I’ve ever seen.”

Japan runs the fourth-largest trade surplus with the United States after China, Mexico and Germany. It exported more than 1.6 million vehicles to America in 2015, according to Bloomberg. The United States, meanwhile, sold less than 19,000 vehicles to Japan.

“I see the auto issue coming back,” Morse told reporters at a session on Japanese influence last month. He noted that many Trump voters were “blue collar auto workers” in Michigan, Ohio and Wisconsin. “They expect more autos to be made in the USA,” he said.

Abe responded to Trump with a plan to invest heavily in the United States. At their February meetings, the two leaders agreed to strengthen bilateral ties with a new “economic dialogue” that would tackle a broad range of issues, including trade, fiscal policies and cybersecurity. Backed by Japan’s business community, Abe also pledged to invest in U.S. manufacturing and infrastructure projects, including high-speed rail.

"We prefer a union-free shop"

Nissan was one of the first Japanese automakers to invest in the United States during the 1980s, when protectionist pressures over the loss of U.S. manufacturing jobs to foreign rivals became a hot political issue.

But from the beginning, Nissan made clear that it did not want union shops at its plants. This was made abundantly clear to me when I returned to Japan in 1983 shortly after Nissan first started producing cars in Smyrna, Tennessee.

“We prefer a union-free shop,” I was told by Eguchi Yukihoto, a Nissan vice president. To achieve Nissan’s “objective” of high-quality vehicles, “we consider it essential to maintain a direct, first hand contact and dialogue with workers. There’s no need for a third party,” he said.

The company’s opposition to unions was a natural evolution of its own history in Japan, where auto unions tend to support management and are far less combative than their counterparts in the United States. But this was not always the case. During the Cold War, workers and unions—spurred by reforms to labor law required by U.S. occupation forces—often clashed with management.

During one such struggle, Nissan became legendary in Japanese industry for crushing one of the country’s most militant unions. This happened in 1953 during a famous 100-day strike against Nissan. The company used the strike to break a powerful, left-wing union that was one of the most influential in Japan.

The Confederation of Japan Automobile Workers’ Unions (JAW), the union that took over, soon became a symbol of the company union-style of labor relations that can still be seen in certain Japanese industries today. Its website actually celebrates the dissolution of “Zen Jidosha,” as the militant union was known.

“Learn from these Nissan workers”

It was precisely to avoid unions with the ability to strike that Nissan and its Japanese, Korean and European counterparts concentrated their investments in states like Mississippi and Tennessee. There were a few exceptions.

In 1983, for example, Toyota created a joint venture with General Motors at a GM plant in Fremont, California, where workers were represented by the UAW. And Mazda, in a partnership with Ford, took over a unionized plant in Flat Rock, Michigan, for a while. But when it came to 100 percent Japanese investment, unions were not welcome.

Nissan’s plant in Smyrna, for example, remains non-union after two attempts to organize workers by the UAW lost by nearly 2-1 margins in 1989 and 2001, according to a 2012 analysis by labor writer Jane Slaughter. Eleven years later, the UAW announced a public campaign to organize the Nissan plant in Canton, starting with a rally in June 2012.

That campaign was part of a broader $60 million UAW campaign to organize the South. At the time, the union proposed that both sides pledge to abstain from intimidation and threats, provide equal access to workers and agree not to disparage the other.

“Not surprisingly, none of the German-, Korean-, or Japanese-owned companies that operate 14 assembly plants in the U.S. accepted [the] offer,” Slaughter wrote.

Now Nissan workers are experiencing the brunt of those intimidation tactics, the Mississippi Alliance organizing this week’s demonstration at Canton claims. Its website is filled with examples of unfair treatment. Signs at a recent protest organized by the UAW proclaimed, “Labor rights are civil rights.”

Nissan may be vulnerable to boycotts, suggested Morse, who has consulted with several Japanese corporations. Nissan’s biggest consumers, he said, are African-American and Latino customers. If enough of those buyers are moved by the demonstrations and protests on Saturday, perhaps Nissan might be forced to change its policies. Although nobody has suggested a boycott, actor Glover has urged people to “learn from these Nissan workers.”

“Listen to them,” he said to a recent community meeting at The University of Mississippi, according to the school’s newspaper. “Take a look at their journeys, and make them a part of yours … The egregious situation in which these workers find themselves is unacceptable and atrocious.”

Tim Shorrock is a Washington-based journalist who grew up in Japan and South Korea. He is the author of Spies for Hire: The Secret World of Intelligence Outsourcing.