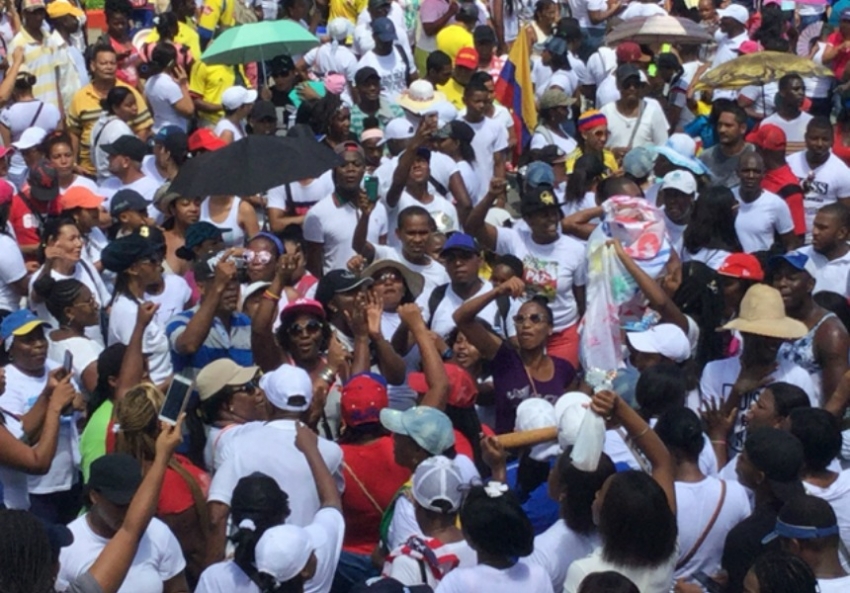 Little-noticed by the English-language media, the Colombian city of Buenaventura was brought to a standstill by a weeks-long civic strike, in which Afro-Colombian communities won major commitments from the Colombian government. Waged from May 16 through June 6, the mass protest was organized by people demanding that the government declare a state of social and economic emergency and provide basic quality-of-life improvements for a population that has been targeted by systematic human rights violations for decades. Buenaventura’s ports generate $1.8 billion in yearly revenue, but most of it its 400,000 residents—90 percent of whom are Afro-Colombian—live in poverty.

The mass protest was organized by religious figures, social justice groups, unions, students, community councils and Indigenous people. The first several days of the strike resembled a city-wide block party, with dancing and music concentrated around dozens of peaceful roadblocks. Representatives of the departmental and national governments began to negotiate with the Strike Committee.

But, in the midst of talks, riot police swept through the city in an attempt to restore the flow of vehicular traffic, shooting tear gas into high-density residential neighborhoods. This crackdown provoked a night of havoc, during which several of Buenaventura’s commercial establishments had their windows smashed and goods taken. When protests resumed, they were marked by ongoing confrontations between the police and protesters until June 6, when an agreement was reached between the government and the Strike Committee.

The government’s violent response to the demonstrations has been decried by many, including Amnesty International, Human Rights Watch and a group of U.S. congressional representatives. Buenaventura’s communities ended the strike with celebrations, applauding commitments made by the government that, if met, will end decades of what locals refer to as “state abandonment” and “robbery.” Roughly $517 million is to be spent on development and public services in housing, education, healthcare, infrastructure and water and sewage systems.

Although the strike has been lauded as a success, it also fits into a pattern in Colombia in which communities that represent specific regions or economic sectors see protest as their only option to achieve social change or attract the attention of the government. And once they take this action, their mobilizations tend to be met with violent repression.

Meanwhile, these communities suffer hyper-exploitation and displacement under trade regimes that are global in scale. Buenaventura is Colombia’s largest port and an integral part of Colombia’s trade with the United States, European Union and partner countries in the Pacific Alliance trade block. As a result, port expansion has surged in recent years, promoted by multinational companies including Group TCB, International Container Terminal Services and PSA International. These megaprojects, as well as industrial storage facilities and a touristic wharf renovation project, have contributed to the displacement of urban neighborhoods in the city’s center. Some 20 million tons of freight pass through the city each year, generating more than 2 billion dollars, while roughly 60 percent of the population lives in poverty and 65 percent is unemployed.

Buenaventura is a case study in the challenges associated with the transition to neoliberal policies in the Global South. Colombia’s ports were privatized in 1993, causing drastic reductions in public revenue for Buenaventura and opening a new era of slavery-like working conditions for port employees. In the early 2000s, water services were privatized, and they have deteriorated steadily since. Currently 60 percent of properties have access to sewage system and 76 percent to running water, even though Buenaventura is surrounded by 16 rivers. The city’s hospital closed recently, and educational infrastructure is crumbling. A once robust fishing industry is now little more than a graveyard of rusting ships.

Simultaneously, the dispute for territorial control between factions in Colombia’s civil war has fueled the displacement of the city residents, half of whom are recognized by the state as victims of armed conflict. This, combined with the drug trade and extortion-oriented gangs, has led to more than a thousand homicides in the last ten years and one of the highest rates of internally displaced personas in the hemisphere.

Meanwhile, an almost complete lack of oversight by the national government has led to widespread corruption. The political class sees public resources as booty that is up for the taking, and the city’s catastrophic conditions are largely the responsibility of political parties and regional figures who have ruled the city in alliance the national elite. Figures for attendance in Buenaventura’s public schools exceed the actual number of students by 50,000 children. Former liberal party mayors—including Édgar Roberto Carabalí Mallarino, Freddy Fernando Salas Guaitotó, Jaime Mosquera Borja and Bartolo Valencia Ramos—have been investigated and convicted in corruption cases. One was murdered. The drug trade and paramilitary structures have expanded their activities to include ‘influence trafficking,’ coercion and the purchase of votes—all of which help to conserve the power of the ruling class.

All of these factors added to the humanitarian and social crisis in Buenaventura, which boiled over into a 22-day civic strike. While the strike has been suspended, communities demanding dignity and justice face a long struggle ahead.

Isaías Cifuentes is an accountant and social justice activist who grew up in Buenaventura. He is an organizer with PASO International, where he supports the Colombian childcare union Sintracihobi in partnership with the U.K.'s UNISON. Neil Martin is the executive director of PASO International.