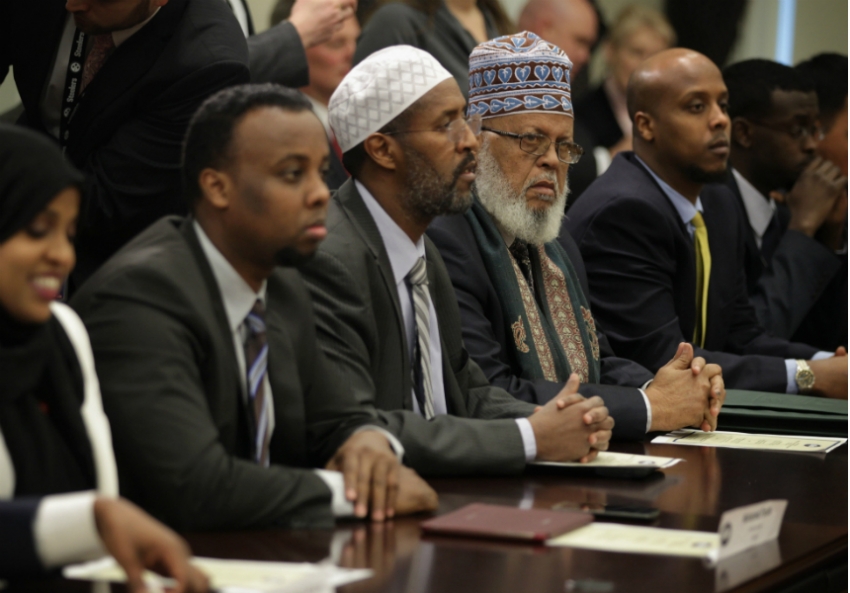 Donald Trump’s campaign rhetoric demonizing refugees and immigrants reached its apotheosis as he arrived in the state of Minnesota last November. During a rally, the then-candidate decried the presence of Somali refugees in the state, declaring that Minnesotans had “suffered enough” from admitting them. “Here in Minnesota you have seen firsthand the problems caused with faulty refugee vetting, with large numbers of Somali refugees coming into your state, without your knowledge, without your support or approval,” Trump said.

While Trump’s brazen fear mongering was consistent with his campaign rhetoric, his tone was nothing new for the state’s Somali communities—long targeted by institutional racism and stigmatization.

Minnesota is host to the largest Somali population in the country, concentrated mostly in the Twin Cities of Minneapolis and St. Paul. Like many other immigrant communities of color, Somalis in the state are confronted with a plethora of social and economic needs and receive little-to-no help from state and federal government agencies. Community-led organizations that seek to fill the gap constantly struggle with a lack of funding and resources.

After nine young men in Minnesota were charged with involvement with the Islamic State, lawmakers seized on the development to ramp up a “counter-terror” crackdown on the state’s most vulnerable residents by targeting their very means of survival. Some state and federal government officials argued that social service provision may provide an answer to preventing “extremism” within the Somali community.

In March 2016, six groups working on conflict prevention, employment education and training, mental health, restorative justice, and after-school sports were awarded federal and private grants under the Obama administration’s Countering Violent Extremism (CVE) initiative. A bill currently being considered by the state’s lawmakers seeks to invest $2 million in youth development initiatives with the hopes that it would “prevent terrorist recruitment in the state.”

The funding under CVE has had to contend with harsh criticism from the same Somali community it is supposed to help. Last year, the West Bank Community Coalition, an organization representing the Cedar-Riverside neighborhood of Minnesota, published an open letter denouncing CVE funding for “stigmatizing us as a result of the false premise that a person’s Islamic faith determines their propensity toward violence.” It demanded that the Somali community receive funding and social services “the same way every other Minnesota community receives them,” rather than “through law enforcement agencies.”

Local activists also charge that funding under CVE has not only made no appreciable difference in assisting the Somali community, but has instead perpetuated the systemic barriers to their success. According to Ayaan Dahir, a local organizer with the Young Muslim Collective, “CVE hasn't been that helpful to the general public. Purely from a financial point of view, it's a very small amount of money for a large number of people.” The organizations that have taken CVE funding, like Big Brother, Big Sister which promised to provide youth mentoring programs, have so far failed to offer anything of substance. “I cannot tell you of a single person who has benefitted from CVE,” Dahir Says.

Similarly, Burhan Israfael Isaaq, another local organizer with People Powered Progress, believes CVE is “targeting the specific issue [of extremism],” and there is no real effort to fund and support organizations which have deep roots within the local Somali community and the capacity to make a difference. “The community is not being heard,” he says.

More worryingly, both organizers point out that funding under CVE has an extremely detrimental impact on the lives of Somalis in the state. “I think providing social services under CVE is dangerous and irresponsible,” says Isaaq. Instead of “genuinely solving any problems [the community] may have,” says Isaaq, such funding instead highlights the community itself as a problem and as uniquely susceptible to violent extremism.

Dahir adds that this “creates a really skewed, one-dimensional perception of the Somali community” to the point that “any time our name comes up, it's always about terrorism or extremism.” Such stigmatization “then translates over to how people are able to get work or housing, or access healthcare, when you're labeled a terrorist or extremist. It trickles down to every other facet of your life.”

Remarkably, the funding is continuing apace without any evidence of its effectiveness. As the former U.S. Attorney for Minnesota Andrew Luger put it in an interview, “We had to try something that would at least help the community. If it helps lessen terror recruiting, obviously that was the goal, but if it didn't, it was still good for an important and vital part of the overall Twin Cities community.”

CVE-related funding is only meant to address the economic and social needs of the Somali community insofar as it would prevent extremism. It undermines the actual needs of a marginalized and underserved population by subsuming it under the rubric of national security. The problems of lack of housing or mental health services are no longer considered issues of social and economic need when they concern the Somali community. They are instead looked at as national security threats. Somali Muslims are marked as exceptional, deserving of economic security and social services only because they may become violent otherwise.

Such an approach also allows for the continuing retreat of the state from universal welfare policies while undermining the basis for solidarity between Somalis and other communities. Adequate health care, mental health services and education and employment opportunities are conceived of not as rights but as ways to solve a problem.