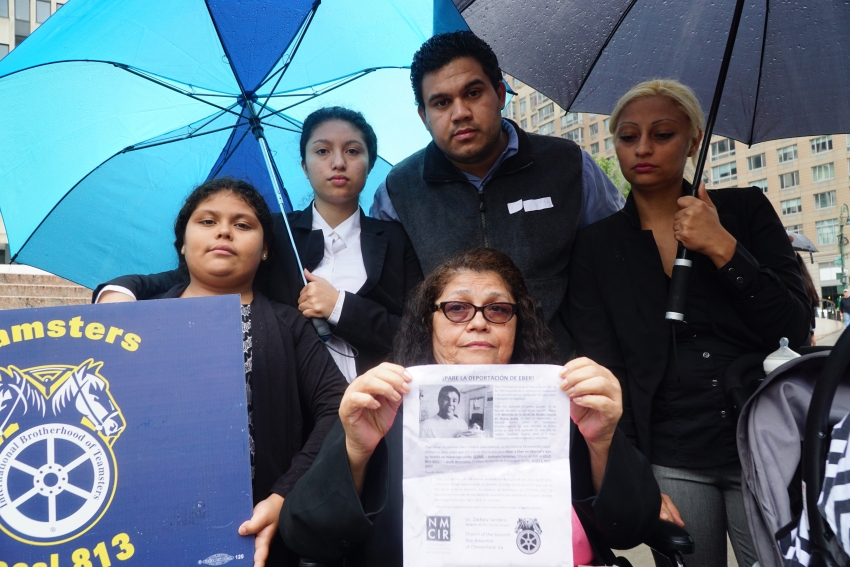 Welcome to Interviews for Resistance. We’re now several months into the Trump administration, and activists have scored some important victories in those months. Yet there is always more to be done, and for many people, the question of where to focus and how to help remains. In this series, we talk with organizers, agitators and educators about how to resist and build a better world.

George Miranda: This is George Miranda. I am president of the 120,000-member Teamsters Joint Council 16. It’s an umbrella group made up of 27 different local unions in New York City.

Sarah Jaffe: Let’s start at the beginning. One of your members was deported last week, right?

George: Correct. Eber Garcia Vasquez was deported basically because his asylum case was rejected. He has been a Teamster for 26 years and has been working in this country and raising his family on that. He has been reporting in routinely, as he is required to.

This time, he went in, and they kept him and scheduled him for deportation. He left behind his family, including three kids. He married a U.S. citizen, and his three kids are U.S. citizens. He was on his way to a green card. Now he is in Guatemala. That is the story. If it happens to him, it could happen to anybody.

Sarah: You guys had a campaign trying to stop his deportation, right? Can you tell us a little bit about that?

George: Yes, we had a campaign, and we still have a campaign to stop his deportation. Unfortunately, events and time overtook us, but we had a lot of organizations come to our aid. We had a protest and rally, and we still have a campaign petition going around to stop the deportation. But unfortunately, like I said, he was on the fast track for some reason. We still don’t know why. Nobody is telling us why.

Again, there was absolutely nothing whatsoever that he did wrong. In fact, the only reason they picked him up is that he was reporting in routinely.

Sarah: I think a lot of people don’t understand that. Can you tell us a little bit more about that, the fact that a lot of people like him are checking in with authorities?

George: You have to report in to immigration folks. They ask the same questions they always ask, like, “Where are you? Are you working?” They get your address and so forth. Then, all they have got to do is just report in so they know exactly where they are. That’s it. And he did that. Routinely.

Sarah: After this, your union passed a resolution to become a sanctuary union. Tell us what that means and how that decision came to be.

Sarah: You mentioned that you will try to bargain for protections for undocumented workers in labor contracts, as well.

George: Yes, we put language in to try to protect them so that if they have to go to court or whatever, they don’t end up losing their jobs or their rights on the job, just because ICE came up and is trying to deport them. So, they maintain their rights and their benefits.

Sarah: These days, the labor movement is pretty invested in the rights of immigrant workers, but that wasn’t always so. People like Trump still try to play immigrant workers off against U.S.-born workers, saying: “Oh, they are coming for your jobs.” Talk about why it is important for unions to fight on this front.

George: Again, the labor movement was made up of immigrants coming back in the early days of this country. You cannot separate us from the immigration situation in this country. They are explicitly tied together. These people earn a living, they are in building trades, they are mechanics, they are in every walk of life.  They are part of the fiber of the labor movement, the immigrant movement. We are tied at the hip.

Sarah: Your union also has been involved in other protests and actions that have gone on about the Muslim ban, the border wall, things like that. Talk about what that organizing in the community looks like for your union.

George: Little by little people are seeing that we are all tied together, and we all have the same issues, whether it is putting a wall up or whatever it may be. All of it is designed to weaken unions and weaken the unity of immigrants and send them back. Over time, people are now seeing that we are more alike than we have ever been before, and we have got to start waking up and fighting back. That is what this is all about.

Sarah: Do you know of other unions that have passed similar resolutions?

Sarah: Do you see this as a model that should spread and could spread to different places?

George: I would hope so. They can call it whatever they want, but I would hope that they are taking the same action that the Teamsters have taken with our resolution and our different local unions.

Sarah: Anything else people should know about this?

Sarah: How can people keep up with you and with the union?