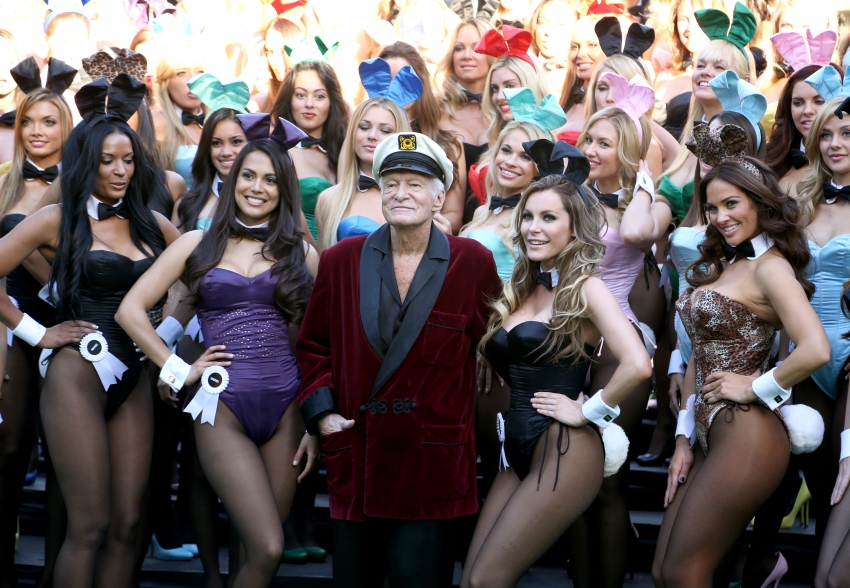 The Playboy empire was built on the backs of female workers. (Rachel Murray/Getty Images for Playboy)

To hear some tell it, Hugh Hefner changed what it meant to be a man in the 20th century. In place of God, country and family values, “Hef”—a persona so intensely branded that it’s hard to type without instinctively adding a (TM) to it—offered up cool jazz, hot chicks, weird bathrobes and the kind of literary sophistication that you could only get when a short story was printed directly opposite a close-up of some lady’s areolas.

The fact that women were mere props in this vision—luxury goods that men acquired to prove their swinging cred—seems not to bother those who embrace the ideal of Hefness. But in fact, the Playboy empire was built on the backs of female workers, who were expected to keep smiling and propping up Hefner’s brand through enormous amounts of grueling labor

The most famous feminist critique of the Playboy empire centered on those women. The Playboy Club, as per Gloria Steinem’s 1963 expose, was a minefield of unethical labor practices. Hostesses were paid minimum wage plus tips—but the establishment kept 50 percent of the tips. (“We may keep all tips that are given to us in cash,” Steinem explained, “but if we indicate any preference for cash tips we will be fired.”) Their wages could be effectively garnished thanks to a demerit system; “bad make-up” was five demerits, eating on the job could be up to 30 demerits and lead to a dismissal, and taking a long break would cost you a demerit per minute. Bunnies were also expected to pay for their own costumes, which were perpetually being demolished by drunk, horny patrons; the bunny tails were a particularly common target for grabbing and ripping. And that was if you were lucky: “I told [a customer] our tails were asbestos,” one Bunny complained to Steinem, “so he tried to burn it to find out.”

But, most important of all, even Bunnies who were being set on fire by their customers were expected to keep flirting with them. Though they were not allowed to sell sex, they were expected to sell the illusion of availability, mainly because it kept the booze flowing. “We depend on our Bunnies to express the personality of the magazine,” the employment manual instructed. “Bunnies are reminded that there are many pleasing means they can employ to stimulate the Club’s liquor volume… you should make it seem that [the customer’s] opinions are very important.”

Above and beyond the physical and financial miseries of the job, this all falls under the heading of “emotional labor”—the work that goes into seeming engaged, interested, caring and receptive even to strangers (at a job) or hostile and unfulfilling partners (at home). Hefner’s vision implied that, once appropriately “liberated,” women would become paragons of giddy, carefree, sexually receptive femininity, paving the way for a world where pretty girls were always thrilled to serve you, and a man’s opinion was always “very important,” no matter how drunk, belligerent, or arson-prone that particular man might be. Not surprisingly, uncritical and unconditional feminine “friendliness” wasn’t a naturally occurring substance. It was work taken on by particular women, who had to learn to simulate it, for minimum wage plus tips.

It would be one thing if Hefner learned from the feminist spankings he got. But he evidently never did. In 2015, Girls Next Door star Holly Madison revealed the work that went into being Hef’s “girlfriend” on national TV. Among other abuses—he controlled the girls’ bedtimes (9 PM, tops) and was so strict about their attention that, at parties, they were only allowed to leave Hef’s side for toilet breaks—he slipped a photo of himself with the girls under their bedroom doors each night, so that they could evaluate their appearance. It reminded them of why they were there: To look good, in order to make Hef look good.

Hefner lived a long life—long enough to polish his brand into something resembling family-friendliness, and to re-write his own narrative in a way that eliminated any allegations of unsavory behavior. (Though those allegations did keep coming.) There were talk-show appearances and friendly biographies. There was the extended whitewashing, not only of Girls Next Door, but the failed drama The Playboy Club, in which Hugh Hefner was a charming, avuncular presence looking to help the Bunnies achieve their goals and dreams. (SPOILER: Their goals and dreams were, mostly, to be in Playboy.) By the end of his life, Hugh Hefner was the Stan Lee of sex: A cute, quirky, harmless grandpa-type who was a little bit out of touch but adorably enthusiastic. The rapacious, distant boss who would take chunks out of your paycheck if you were caught eating had been erased from the picture.