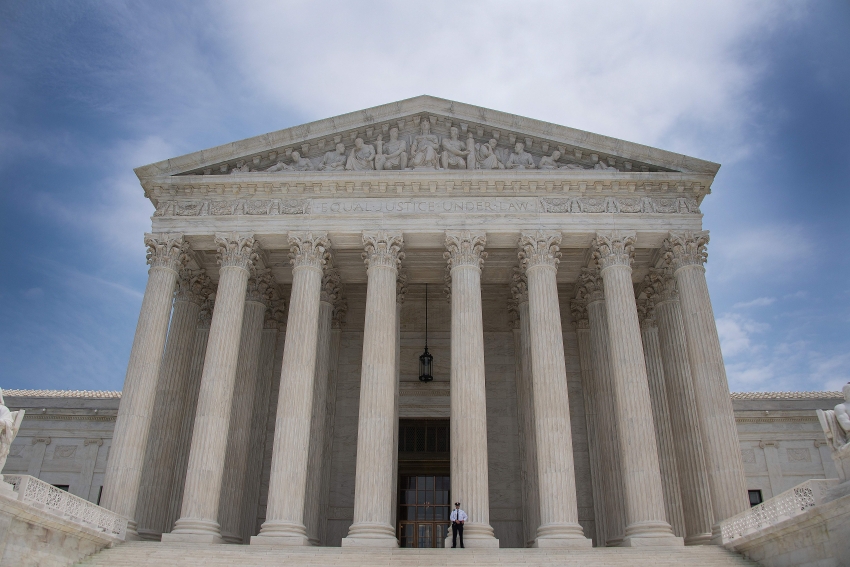 The Supreme Court has agreed to hear a case that could take "right to work" nationwide. (JIM WATSON/AFP/Getty Images)

On Thursday, the Supreme Court agreed to hear Janus vs. AFSCME, the case that will likely turn the entire public sector labor movement into a “right-to-work” zone. Like a lazy Hollywood remake, the case has all the big money behind it that last year’s Friedrichs v. CTA did, with none of the creativity.

In Friedrichs, the plaintiffs argued that interactions between public sector unions and government employers are inherently political. Therefore, the argument went, mandatory agency fees to reimburse the union for the expenses of representation and bargaining were forced political speech, violating employees’ purported First Amendment right to not pay dues.

The case ended in a 4-4 deadlock in March 2016, following the death of Justice Antonin Scalia, who had appeared poised to vote against the unions’ interests.

Much like Friedrichs, the Janus case has rocketed through the federal courts. The National Right to Work Foundation, which represents the plaintiffs, petitioned the Supreme Court to hear the case in early June. All briefs will likely be submitted by mid-January 2018, meaning SCOTUS could hold hearings almost exactly a year to the date that the Court last heard the same arguments.

The defendants may argue for procedural delays, which could potentially kick the decision into the following court term in 2018-2019. And it’s possible that in the meantime Justice Anthony Kennedy could die of a heart attack, or Sam Alito could forget to look both ways while crossing First St. and get run over by a bus. And the Democrats might take back the Senate next year, preventing the Trump administration from naming any more conservatives to the Court.

That’s the kind of magical thinking we’re left with, because the conservative majority on the Supreme Court is clearly determined to tilt the power of the country in favor of big business and against unions for at least a generation, and they care little about how just or fair their decisions appear to the public.

“Right to work” laws, currently on the books in 27 states, strip the requirement that union members pay union dues. Unions claim this creates a “free rider” problem, allowing workers to enjoy the benefits of union membership without contributing a dime. This deprives unions of crucial funding, but also—and this is no small consideration for the right-wing—every union family that drops their membership becomes one less door that union members can knock come election season.

Most national unions have been preparing for this eventuality since the first time the Roberts court took up the issue of public sector union fees in 2014’s Harris Vs. Quinn case. (If you’re keeping score, yes, the conservative justices on the Supreme Court have spent three years in a row trying to break the backs of unions).

Much of this preparation has focused on making sure that unions have a shop steward in every department and that every new hire is asked by a living breathing human being to actually join the union. But, as I wrote earlier this month, the bigger threat once workers have the right to evade union fees is the direct mail and phone-banking campaign that is already being run by Koch Brother-funded “think tanks” to encourage workers to drop their union membership and “give yourself a raise.”

As I wrote then, “The slick ‘give yourself a raise’ pamphlets will do the most damage in places where members think of the union as simply a headquarters building downtown. … But where members are involved in formulating demands and participating in protest actions, they find the true value and power of being in a union. That power—the power of an active and involved membership—is what the right-wing most fears, and is doing everything in its power to stop.”

There is a certain irony in conservatives applying the First Amendment to collective bargaining, a principle that conservative jurists have studiously avoided for two centuries. If every interaction that a union has with the government is a matter of speech, then we have a stronger argument for instituting a Bill of Rights for labor to protect workers and their right to demand fair treatment on the job.

Unions are already oppressively regulated. They are told by the National Labor Relations Board whom they can picket, when they may march and what they might say on a flyer. And they face steep fines if they disobey. Workers are forced to attend endless hours of anti-union presentations before a union election with no right to respond or boycott.

If every interaction the government has with a union is a matter of political speech—as a ruling in favor of Janus would imply—unions must respond by forcefully arguing that the rules of the system have been unfairly holding workers back, violating our rights to free speech, due process and equal protection.