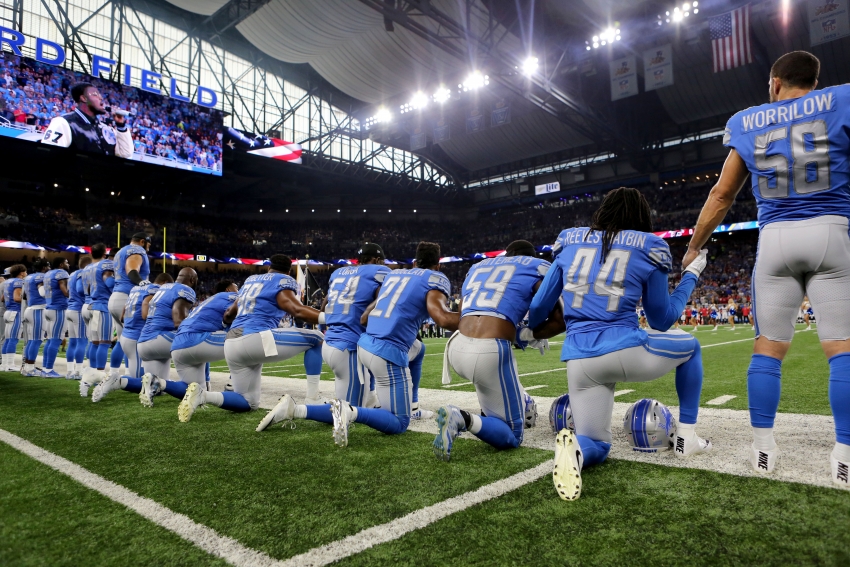 Members of the Detroit Lions take a knee during the playing of the national anthem prior to the start of the game against the Atlanta Falcons at Ford Field on September 24, 2017 in Detroit, Michigan. (Photo by Rey Del Rio/Getty Images)

At a September 22 political rally, President Donald Trump kicked off a kerfuffle by calling on the National Football League (NFL) to fire players taking a knee during the National Anthem. “Wouldn’t you love,” said the president, “to see one of these NFL owners, when somebody disrespects our flag, to say, ‘Get that son of a bitch off the field right now, out, he’s fired. He’s fired!’”

The NFL and the NFL Players Association (NFLPA) responded immediately in support of the players. As protests continued, Trump kept blasting away. Debate raged on for weeks about free speech, race, social justice, patriotism and more. Altogether overlooked, however, were the players' union rights that effectively render Trump's demand worthless.

The NFL and the NFLPA are co-equal parties to a collective bargaining agreement (CBA) that sets wages, rules and working conditions. The union is the workers' accredited representative, while the employer manages the workplace with policies that don't violate the CBA or the law.

In general, union workers are not "at will" employees like nonunion workers. If disciplined (warned, suspended or terminated), they may resort to the CBA's grievance procedures, including neutral and binding arbitration. The employer must show just cause for discipline by proving that the worker breached a policy that was reasonable, known and consistently applied—and that discipline was reasonable and proportional.

There is no way Club owners could do that. Neither the CBA nor employer policies prohibit protest, and there is no egregious conduct at issue—such as theft or attacking another worker—that would warrant discipline on its face. Consequently, amid swirling controversy, the NFL and NFLPA met and agreed to uphold existing policy in the NFL’s game operations manual that players "should" stand during the Anthem. In other words, it's optional.

The deal stopped any question of discipline in its tracks and promised mutual efforts toward addressing the sociopolitical issues that gave rise to the protests. Dallas Cowboys owner Jerry Jones, who had threatened players after consulting with Trump, had no "just cause" for discipline based on rules, policies or conduct.

Make no mistake. This is all about collective bargaining. The parties affirmed a "past practice," which, in a union workplace, can be just as binding as a CBA rule. If the NFL had unilaterally changed the policy—and especially if a protesting player got fired, as Trump insisted—the door would swing wide open to a union grievance and potential arbitration, dragging out more controversy the parties wanted to avoid.

Contract language limits discipline even more. A review of the current CBA, found online and confirmed with an NFLPA spokesperson, signals game over for the Trump-Jones threat.

All Clubs must publish and make available to all players at the commencement of preseason training camp a complete list of the discipline that can be imposed for both designated offenses ...and for other violations of reasonable Club rules.

The Cowboys' training began July 24, weeks before Trump's demand and Jones' subsequent capitulation. The Cowboys provided no confirmation that a Club rule about protest had been duly listed.

The CBA and past practice indicate that the NFL Commissioner has the final say on what discipline a Club may pursue. Commissioner Roger Goodell was not disposed—before or after the joint meeting—to discipline protesting players.  All but one Club owner, Jerry Jones, agreed.

There will be no discrimination in any form against any player by the NFL, the Management Council, any Club or by the NFLPA because of race, religion, national origin, sexual orientation, or activity or lack of activity on behalf of the NFLPA.

Given rules, policy and practice, it could be argued that curbing protests initiated by players of color over government mistreatment of people of color violates this section. Furthermore, the reference to NFLPA "activity" reflects longstanding labor law protecting workers' rights to participate (or not) in "concerted activities for the purpose of collective bargaining or other mutual aid or protection."

Trump repeatedly pressured owners to fire protesters in violation of the CBA. "Concerted activities" have blossomed with displays of solidarity among players—and even some management. They take a knee, lock arms, or raise a fist. And some, as they always have, choose to stand, which is their right.

Word circulated that joint meetings to address social justice concerns had been cancelled.

Jones—still agitated and agitating—had reportedly organized a Club owners' conference call to discuss ousting Goodell. He also cut lineman Damontre Moore, who had raised his fist during the Anthem. The Cowboys said it was merely a roster move.

Moore joins Colin Kaepernick, the San Francisco 49er who started the protests and then got zero job offers after becoming a free agent. Kaepernick's lawyer filed a grievance alleging collusion between the Clubs and the NFL in violation of CBA Article 17, appropriately titled, "Anti-Collusion."

As it stands now, no player has been officially disciplined for protesting, and the policy, practice and CBA are intact.