Hondurans Are Out on a One-Week General Strike. Their Grievance? A U.S.-Backed Dictatorship. 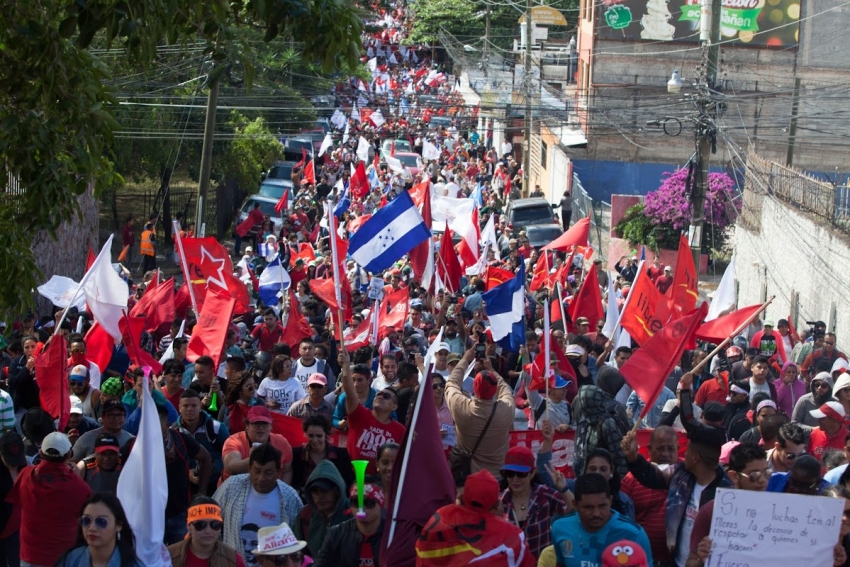 Tens of thousands march through Tegucigalpa on December 10, 2017 to protest to alleged fraud in the presidential election. (Jeff Abbott)

​Honduras is the site of widespread social and political unrest following the country’s highly contested November 26 presidential election. The Opposition Alliance Against the Dictatorship in Honduras, or La Alianza, called for a week-long general strike against the re-election of incumbent Juan Orlando Hernández of the Partido Nacional ahead of his inauguration on January 27. Tens of thousands of protesters are once again in the streets building barricades in cities and towns across the country to denounce alleged fraud in the presidential election.

“Our constitution says clearly that the re-election of a president would be illegal without the consultation of the people of the country,” Tomas Membreño Pérez, president of the Sindicato de Trabajadores de la Agroindustria y Similares (STAS), tells In These Times.

Nine years ago, the democratically elected President Manuel Zelaya was ousted by the armed forces of Honduras. The coup was promptly denounced by countries across Latin America, but the United States quickly moved to recognize the government that was installed following the coup. To contest the far-right National Party administration that has maintained power since 2009, the Alianza has brought together social movement forces, including labor unions, campesino organizations and indigenous communities.

The current crisis began following the November 26 presidential elections. Many Hondurans saw the election as an opportunity to regain ground lost by the 2009 coup. Initial results suggested that the opposition candidate, Salvador Nasralla, a well-known sports commentator, was leading Juan Orlando Hernández in the results. But this lead disappeared following a mysterious error in the computers of the country’s electoral council. People mobilized across the country, establishing roadblocks of burning tires and organizing marches across the country to challenge the alleged theft of the election.

The opposition called for a recount of the votes from more than 5,000 contested polling stations. Following the hand recount, the country’s electoral council declared Hernández the winner. Yet these results are highly contested. On December 17, the Organization of American States issued a statement from the Secretary General, Luis Almagro, calling into question the official results.

Now, the country’s labor movement is at the heart of the mobilizations to challenge the continuation of the repressive right-wing government led by Hernández.

“A great part of the labor movement is participating in the protests,” Maria Elena Sabillón from the AFL-CIO’s Solidarity Center in Honduras tells In These Times.

The protesters face intense repression from state forces. On December 1, the administration declared a state of siege, suspending the constitution and deploying the military and military police to discourage nightly protests and roadblocks. By the end of the month, the repression led to at least 30 deaths, according to the human rights organization Committee of Relatives of the Disappeared in Honduras (Comité de Familiares de Detenidos Desaparecidos en Honduras - COFADEH).

“It is almost a crime to shout ‘Fuera JOH’ (Out with Juan Orlando Hernández),” says Pérez.

International trade unions and federations denounced the violent repression against protesters, with Cathy Feingold, the Director of the AFL-CIO International Department, issuing a letter to the U.S. Government calling on the Trump administration to “suspend all military assistance.”

The violent repression has continued through the general strike, with the armed forces being used to clear roadblocks and disperse protesters.

“The government prepared for [the general strike], and they have been repressing the protests,” says Sabillón. “The government has not responded to any calls for dialogue. To the contrary, the government is trying to guarantee the [fraud].”

Today’s ongoing protests stem from public opposition to the 2009 coup. Once ushered into power, the new administration of Porfirio Lobo Sosa quickly implemented a campaign of neoliberal reforms to privatize key infrastructure, including highways and energy, as well as the public health ministry. The administration passed measures that permitted companies to hire 40 percent of employees as temporary workers—a reform threatens the workers’ ability to organize and puts them in a precarious position.

“The law of temporary work has impacted thousands of workers,” says Pérez. “Many positions have been replaced by temporary posts. A temporary worker has no rights to stable work and no access to social security. This is a government that is not interested in the well being of the people. Instead of investing the taxes in guaranteeing the health of the workers, they invest in bullets, bombs and tear gas to use against the people.”

Among the biggest attacks on labor rights is the establishment of entire privatized cities through the construction of model cities. This project was rebranded as the Zones for Employment and Economic Development (ZEDES) after the Honduran courts declared the first incarnation unconstitutional. These proposed projects would be outside national law and provide companies with the means of stemming labor organizing.

Hernández has long supported this privatization plan and a swath of anti-worker measures. Since Hernández won the presidential election of 2013, farmworkers have faced oppression from business owners for their organizing, and they have received little support from the Ministry of Labor.

“His [first] term was completely against the workers in our country,” says Pérez. “He has violated our rights as citizens of our country, he has damaged the population through privatization as well as the legislation of laws that go against our rights. We as workers are against [Hernádez], and we are united with the Alianza as an alternative to the violation [of our rights] and one that will not permit more fraud or violation the will of the people.”

“This administration is totally illegitimate,” Pérez continues. “No one has confidence in him.”