In a Historic First, the Chicago Teachers Union and Charter School Teachers Have Joined Forces 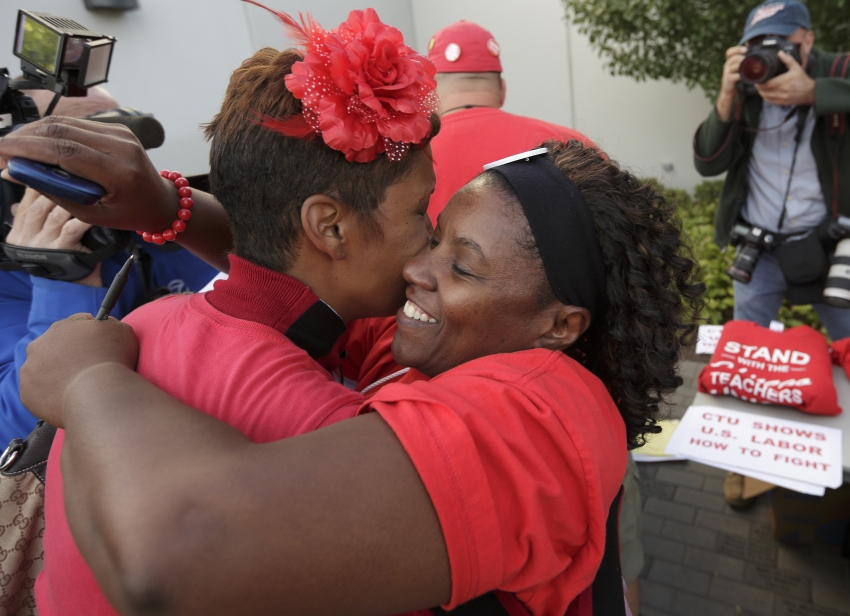 The merger is good news for unionized teachers and bad news for privatization advocates. (John Gress/Corbis via Getty Images)

With the approval of a historic union merger, teachers in Chicago are positioning themselves to mount a greater challenge to privatization and austerity.

On Monday, the Chicago Teachers Union (CTU) announced that its members had voted in favor of amalgamating with the Chicago Alliance of Charter Teachers and Staff (ChiACTS), which, since 2009, has organized about 1,000 educators at over 30 charter school campuses.

While cooperation between unionized educators at charters and district schools in the United States is common, this is the first known case in which teachers from both types of schools have merged into a single union local.

The move was approved by 70 percent of voting members, according to the CTU. In a similar vote last June, 84 percent of ChiACTS members endorsed the merger.

“These results are the outcome of a lengthy dialogue among members,” CTU Vice President Jesse Sharkey said in a statement. “We’ve declared that we’re stronger together in one big union. We’ve embraced our common struggle to support our workers, our students, their parents and our neighborhoods.”

Illinois Network of Charter Schools President Andrew Broy—who laments that “Chicago has become the epicenter of charter union organizing in the country”— attacked the merger as a “power grab” and “hostile takeover” by the CTU, despite the thumbs-up by a majority of ChiACTS members.

Leaders of both union locals say they don’t have a problem with charter schools per se, but rather they oppose the proliferation of the charter system of management, where private companies administer schools with public money.

“Charter schools are here; they’re not going anywhere,” CTU President Karen Lewis explained when the merger was first proposed last spring. “It’s the management companies we have the issues with, not the charter teachers, not the students, not the parents.”

Baehrend told In These Times last year that private management companies represent “an extra layer of unaccountable bureaucracy” in charter schools, blocking teachers from “the resources we need in our classrooms.” “Charter proliferation does not help the charter schools that already exist,” he continued. “It actually spreads the pot of money more thinly,” leading to budget cuts, layoffs and lower enrollments.

Over the past two decades, Chicago has seen a dramatic expansion in the number of charters, while district schools have been systematically underfunded and shut down. In 2013, Mayor Rahm Emanuel presided over the shuttering of  50 schools, one of the largest mass school closings in history.

Union leaders hope that by organizing teachers and staff at charter schools, and giving them a voice to advocate for more resources through collective bargaining, the charter model will become less attractive to investors and public officials.

Between October 2016 and May 2017, ChiACTS members voted overwhelmingly to strike at three different schools in order to win fair contracts. Each time, the work stoppages were narrowly averted by last-minute agreements with management.

The local is currently running campaigns to unionize teachers and staff at Namaste Charter School on Chicago’s South Side and at Noble—a network of 18 charter high schools spread across the city. If the latter is successfully organized, it would be the largest unionized charter system in the country.

Meanwhile, in its most recent contract, approved in November 2016, the CTU successfully negotiated a cap on the opening of new charters schools.

As laid out by a service agreement signed in 2015, the CTU already assists ChiACTS with contract negotiations, and members of both locals have frequently supported one another at rallies and on picket lines.

With the unification of the two unions into a single local, ChiACTS members will maintain their existing contracts with charter schools and will elect representatives to the CTU’s House of Delegates and Executive Board.

Sharkey says the merger “isn’t a magic bullet, but it does mightily strengthen our hand against charter operators,” making teachers “better prepared to challenge Rahm, Rauner and Trump when they attack public education and its workers.”