3 Democratic Campaigns Now Have Staff Unions. Why Not More? 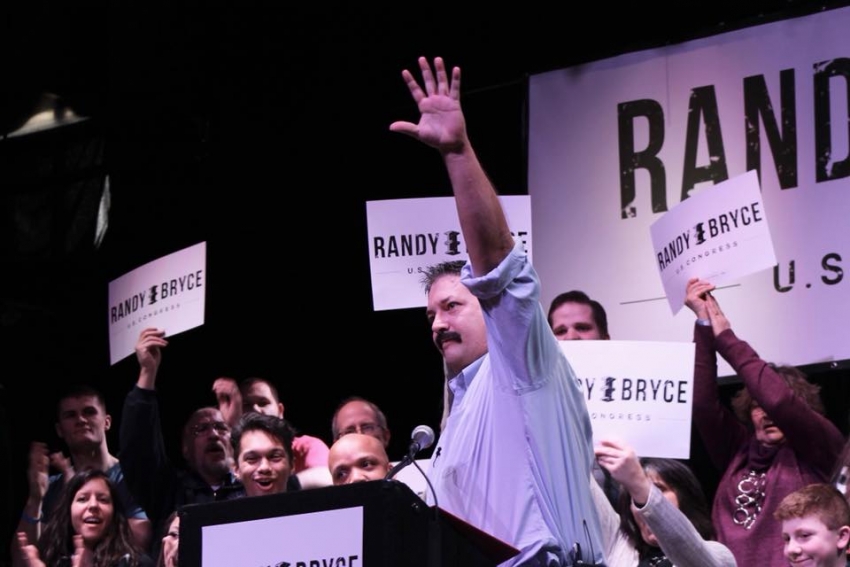 All signs point to a messy battle in the 2020 Democratic primaries, pitting establishment types against democratic socialists. Thanks to an effort spearheaded largely by Bernie Sanders’ 2016 campaigners, the staffers for a few 2018 Congressional candidates could be pioneering a new litmus test for determining candidates’ progressive credentials: Do they recognize their employees’ union?

Last week, the upstart Campaign Workers Guild (CWG) announced that staff members at three Democratic campaigns around the country have formed unions, each of which was voluntarily recognized. Campaigners for Jess King, running for a House seat representing southeastern Pennsylvania, Randy Bryce, vying to take Paul Ryan’s Congressional seat, and Chris Wilhelm, running for Montgomery County Council, have each successfully negotiated union contracts with their progressive—and in some cases openly Left—bosses. The two non-management staffers in Democrat Dan Haberman’s campaign for Michigan’s 11th Congressional District have also taken first steps toward a collective bargaining agreement, with Haberman recently signing a letter of support for the process to move forward.

While these efforts will almost certainly transform working conditions for electoral staffers, the organizing drives might also transform the Democratic Party.

“Every campaign worker at a certain point has either joked about joining a union or unionizing their workplace,” says Brian Wivell, field director for the Wilhelm campaign, and one half of a newly-minted, two-person CWG local. At a previous campaign he worked on, staffers hung the union logo from the fictional Springfield Nuclear Power Plant—of Simpsons fame—in their office. “As soon as we heard this was happening, we jumped on it,” he tells In These Times.

Campaign work often involves long hours—80 to 100 per week—for little pay, particularly for those on the lower rungs of the hierarchy of electoral politics. Piled-up expenses—for gas, especially—often don’t get reimbursed, and staffers can find themselves staying in precarious housing with supporters of the campaign while out on the road. The frantic, temporary nature of campaigns also means there’s little recourse for employees who face sexual assault or harassment on the job, a problem compounded by the fact that so much of the economy of campaign work depends on relationships within a relatively small network of staffers, at the state and local levels especially. Aside from improving wages and working conditions across campaigns, one of the biggest impacts of the CWG’s efforts could be establishing an industry-standard policy for dealing with sexual assault and harassment.

Campaign staffers are hoping to address harassment from supervisors and coworkers, as well as volunteers, who they depend on to meet canvassing and phone-banking quotas. As CWG organizer Meg Reilly puts it, “If your boss is constantly breathing down your neck saying you didn’t meet your goals, do you report [a volunteer] for being a creep or get your numbers up so you don’t get fired?”

Reilly realizes the optics of CWG emerging from several former Sanders campaign staffers might raise questions about the Senator’s labor practices. But she says that Bernie was not a bad boss at all. “The Bernie campaign was just about as good as you could get,” Reilly underscores. “It’s the Cadillac: We got days off and health insurance. It’s just that on the Bernie campaign we had a lot of pro-labor people, and people who were fairly radical.”

Of sexual harassment and assault, Reilly says, “Campaigns are just rife for it. You’re spending 80 to 100 hours a week all together, and campaigns are so small. Everyone knows everyone, and there’s a huge fear of being blacklisted if you do report something. A lot of people who are victims of harassment or assault don’t say anything but because they’re afraid of being blacklisted.” When abuses are reported, she explains, they tend to be handled internally. By contrast, the contracts the Guild has negotiated so far explicitly outline a process for handling such processes through a third party.

“On campaigns, there is no HR department,” says Lauren Hitt, communications director for the Bryce campaign and a member of the bargaining unit there. (I spoke with her and Bryce jointly by phone.) “Problems are always better solved when you address them before they’re problems, and have policies laid out and written down. That’s a big difference from the way campaigns operate now. There has never been anything like that.”

The campaign staffers that have organized so far faced relatively friendly audiences. The first shop—Bryce’s campaign—came about when his digital director, Nate Rifkin, asked him about the idea of starting a staff union as they were driving around talking to voters in Wisconsin. “It was a no-brainer,” Bryce tells In These Times. “It’s an extension of why I’m running in the first place. It comes down to what’s important to me as a candidate. It’s not about me. I am where I am today because we have a very talented staff.” Staffers hammered out a contract with management, which includes Bryce and campaign manager David Keith, who both have hiring and firing power. An Ironworker, Bryce got his start in politics through his union, and has campaigned as a working-class opponent to incumbent Paul Ryan.

Reilly, who worked for the Sanders campaign in 2016, ultimately hopes that CWG will adopt a “hiring hall” model, along the lines of the building trades. As in those industries, campaign work can be sporadic, with staffers facing months-long gaps between election cycles. Membership in the union provides workers with a backstop of support in dry months, and sets industry standards on wages and working conditions.

“Even if campaigns go well, they end, and the staff is looking for another job,” says Hitt. “Most campaign workers—if they do it from campaign to campaign—are looking at at least a month or two when they’re unemployed.” Several of the staffers In These Times spoke with noted that such chronic instability means campaign demographics tend to skew toward the people best able to shoulder it: young, white and middle class individuals, often recent college graduates. Hitt, Reilly and others were excited about the potential of unionization to diversify campaigning more generally, making it a more stable prospect for people dealing with student debt or familial responsibilities.

“You have to be pretty privileged to work for such little pay, and to have a place to crash in campaigns,” Reilly says. “It all sort of fits together like a puzzle. Even progressive candidates who talk the talk about diversity—even reparations—don’t pay attention to the fact that their campaign staff is coming from a pretty homogenous background.” She notes that campaign workers are often expected to have their own cars and phones, on top of sacrificing time that might otherwise be used to care for children or loved ones.

“Just personally, I have epilepsy. So not having healthcare consistently and paying for anti-seizure medications isn’t an option for me,” Hitt says, adding that it was only in the past several years that healthcare benefits became widespread for campaign staffers. Stipulations already built into certain CWG contracts—for benefits and higher wages, for instance—could make campaigning more accessible to organizers from diverse backgrounds, potentially expanding the range of communities within candidates can build relationships with.

Wivell tells In These Times that he “would love to see a future where there’s a Project Labor Agreement between the Democratic Party and campaign workers. There is a reason the building trades follow that path and are able to enforce certain standards for workplace protections.” When unionized crews aren’t used in construction projects, it’s not uncommon to see an inflatable rat outside of job sites. Feasibly, the same thing could happen to Democratic campaigns who hire non-union staff.

Staff unionization could also factor into Democrats’ efforts to win endorsements from organized labor. Especially in state and local races, union endorsements can offer critical resources. Often that money goes toward candidates considered to have the surest chance at winning; their willingness to fight for organized labor can sometimes take a backseat. Yet the optics of a union endorsing a candidate that either failed to recognize or even fought a staff union are more stark, and could create an uncomfortable situation for establishment or even progressive Democrats who are more willing to make public overtures to unions than welcome them into their own campaigns. “It’s really hard to take labor’s money and endorsement and not actively support labor when it’s coming to organize,” Harry Baker, Wivell’s data director, tells In These Times.

As it broadens the range of people who are able to work on campaigns, CWG hopes that collective bargaining agreements will translate into rank-and-file campaign staffs having more say over their campaigns’ strategy. It is well known that electoral work runs on strict hierarchies, but a strong bargaining unit could democratize decisions around things like outreach strategies and messaging.

As in the building trades, CWG envisions that the union could at some point offer not just economic security, but training—to keep staffers updated on the latest voter database software, for instance. Like any other profession, political campaigns require specialized skills. The union could help candidates standardize how those skills are developed and ensure that staffers are competent and up-to-date on the latest developments in their field.

“Every cycle we hear about how field is the most important part of any campaign,” Reilly says. “It’s a really specific skill set, and we think that it’s really been hurting candidates—Democratic and others—to not be systematically investing in it. We can train up these workers who are really excited to work. We think if we treated the workers better and kept them trained, we could win more campaigns.”

Having started around a year ago, CWG now has a 16-member advisory board comprised of both former Sanders and Clinton staffers. Union members pay $30 a month in dues, and campaign workers who aren’t actively working on a campaign can affiliate for $10 a month. CWG is eager to support union drives from Republican campaign staffers, although the union hasn’t gotten any bites yet. To date, Reilly says, the union is working to win contracts and recognition on everything from local ballot-initiative campaigns to Senate races.

Organizers see the CWG as similar in spirit to the unionization campaigns taking place in some digital newsrooms—beneficial both as a way to improve wages and working conditions and to build solidarity among white-collar workers for working-class politics in the United States and abroad.

In These Times asked Hitt and Bryce whether they had heard rumblings from Paul Ryan’s Congressional campaign about any latent unionization efforts. Laughing, Bryce replied that his office had just dropped off 16,000 signatures to his Racine office calling for gun reform: “I kicked myself afterwards for not asking them.”