The Lesson From West Virginia Teachers? If You Want to Win, Go on Strike. 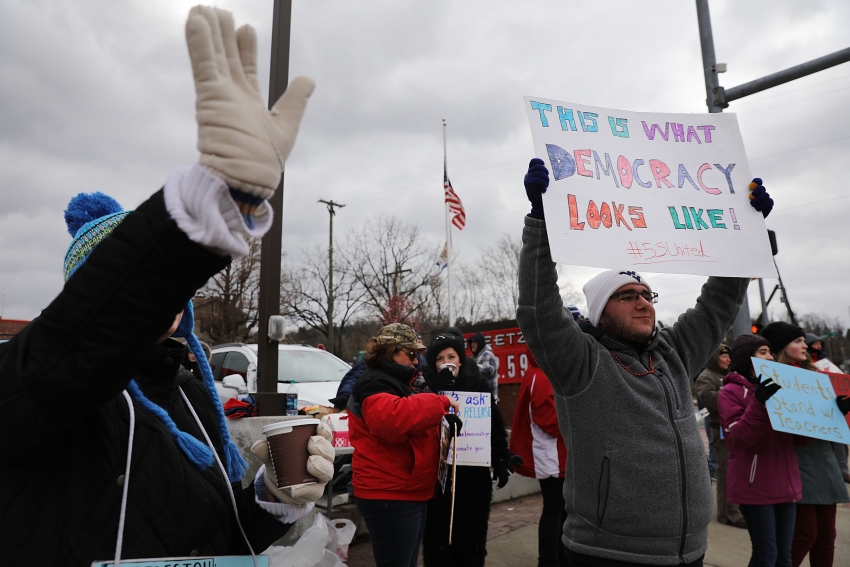 For many years now, observers have been ringing the death knell for the U.S. labor movement. West Virginia teachers haven’t just pumped life back into that movement—they’ve reaffirmed the fundamental principle that the key to building power and winning is for workers to withhold their labor.

On Tuesday, Republican Gov. Jim Justice signed a bill passed by the state legislature that will provide a 5 percent raise for teachers and school personnel. The deal reportedly also includes a 5 percent raise for all state employees, though that will have to be finalized through an upcoming budget bill. The state has also agreed to set up a task force to address the increasing costs in teachers’ healthcare plans—a key issue for striking teachers.

While the details on how the pay hike would be funded were not immediately clear, what is certain is that the prolonged strike has forced the state’s hand—and teachers have won major concessions that will directly improve the lives of workers across the West Virginia.

The strike in West Virginia has been astonishing from the outset. Since Feb. 22, more than 20,000 teachers in all 55 counties took part in what became the longest statewide strike in West Virginia’s history. The mass action was led not by union leadership but by rank-and-file members who refused to accept a compromise proposal last week and continued to rally at the capitol in Charleston, demanding an increase in pay and healthcare protections. They were joined by other public-sector workers standing in solidarity with striking teachers. And teachers benefitted from goodwill and support from the public, which helped make their protest all the more effective.

All of this has taken place in a state that does not officially recognize collective bargaining or the right to strike. Teachers in West Virginia have proven that even under hostile conditions for labor, winning is possible when workers are willing to take risks and stage dramatic and militant actions. This is a lesson that will become all the more important following the Supreme Court's decision in Janus v. AFSCME, a case that could defund public-sector unions across the country.

The strike sent political shockwaves throughout West Virginia, halting other business at the capitol and catapulting the struggle for labor rights into the public eye. Workers draped in red—a callback to the state’s history of mineworker activism—stood on picket lines and held mass rallies across the largely rural state for nine days. The potential effects of the strike on other workers around the country are already beginning to come into focus.

Just days after the West Virginia strike began, teachers across the state of Oklahoma announced their intention to walk off the job in order to win higher pay. As is the case in West Virginia, Oklahoma teachers are among the lowest paid in the nation and are similarly prohibited from striking by state law. Yet following West Virginia’s lead, 41,000 Oklahoma teachers could be on the picket lines within weeks, and some teachers are already contemplating a wildcat strike without the official consent of union leadership. Alicia Priest, president of the Oklahoma Education Association, tells Bloomberg’s Josh Eidelson that while some teachers may have previously been reticent to engage in a walk-out, the West Virginia strike “has given them an emboldened sense of purpose and a sense of power.”

On Feb. 26, graduate students at the University of Illinois at Urbana-Champaign launched an ongoing strike to protect tuition waivers and make the university accessible to low-income students. On that same day, teachers in Jersey City, N.J. voted to authorize a strike over increasing healthcare costs.

And the militancy is not limited to educators: On March 4, 1,400 Frontier Communications workers in West Virginia and Virginia walked off the job to demand a fair contract including increased job security.

The spirit of defiance and disruption fueling these worker-led actions is a welcome development for a U.S. labor movement that is increasingly under attack. In addition to the threat of an unfavorable ruling in Janus, the Trump administration’s labor department has been hard at work rolling back workers’ rights, including allowing bosses to pocket their workers’ tips, opening the door to the spread of unpaid internships, making it easier for employers to pay women and minority workers less, and refusing to defend an Obama-era rule that would have provided overtime protections.

Meanwhile, the National Labor Relations Board, now stacked with Trump appointees, has repealed a slew of rulings that had previously buoyed union organizing. As Mark Joseph Stern reported for Slate, “Taken together, this spate of decisions will hinder millions of employees’ abilities to unionize and bargain collectively.”

This onslaught comes on top of state-level efforts to curtail the power of labor unions. Twenty-eight states already have “right to work” laws on the books, and the Janus case could, in effect, spread these laws to the public sector in the remaining 22. These laws, allowing union members to “opt out” of paying dues, have been shown to weaken the power of labor unions while undermining their ability to protect and bargain for their members. They also lead to lower wages: Research from the Economic Policy Institute shows that wages are 3.1 percent lower in “right to work” states for both union and non-union workers alike.

The push by many states to privatize public services and starve public budgets of funding through austerity measures has put public-sector workers at greater risk of seeing their jobs disappear—and left them fighting over scraps when it comes to pay and benefits.

Walk off to win

The teachers’ strike in West Virginia is a prime example of how workers can organize and win in the midst of such an anti-labor climate. Rather than agreeing to accept a meager 2 percent pay increase previously signed by the governor, teachers channeled their anger and frustration into collective action. By banding together and refusing to work, the teachers exerted monumental pressure on the state government and won a pay increase more than double what had been on offer a mere two weeks before.

This is the kind of victory that proves why strikes work. Teachers and all workers who are considering walking off the job to win demands can look to West Virginia and say, “it worked for them, so why not for us?”

Winning a 5 percent pay raise is already a triumph, but if West Virginia teachers help spark more militant worker action across the country, the impact of their victory could be transformative—and just what an imperiled labor movement needs.