The VA Is the Closest Thing We Have to Single Payer. Now Trump Wants to Privatize It. 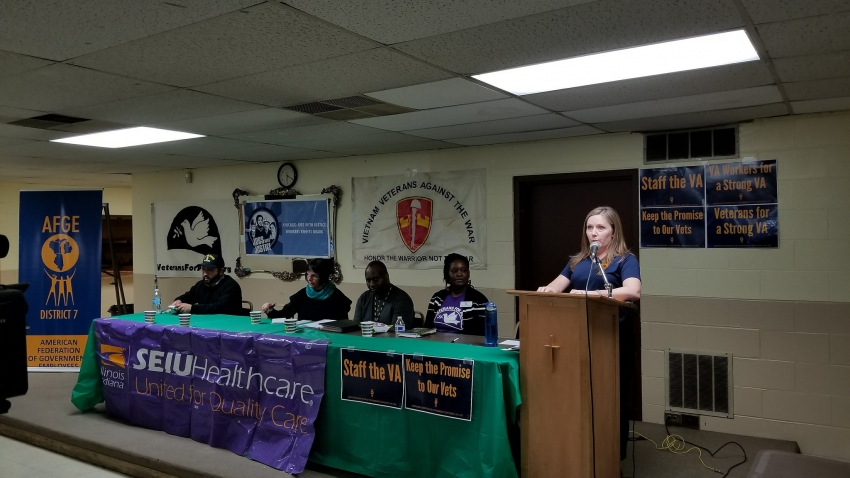 Unions and veterans' groups came together on March 1 to discuss saving the VA from privatization. (AFGE District 7/Flickr)

Aaron Hughes, who was deployed to Kuwait and Iraq in 2003 and 2004, now has a serious, very rare lung condition. But he told In These Times he gets “really outstanding care” at the nearby Jesse Brown VA Medical Center. “The doctors are at the top of their class,” he said.

Because his condition is so rare, Hughes has been sent to a hospital outside of the Department of Veterans Affairs (VA) for specific tests. And his taste of the private healthcare system has been sour. “As soon as I went there, all hell broke loose,” he said said, explaining there were problems with sharing records between the two institutions. “With the VA system, when you do tests, it’s all integrated.” Every doctor Hughes sees is aware of all the other treatment he gets, from vision to mental health. The private hospitals, on the other hand, often refuse to send the records back to the VA. “The private sector isn’t about sharing your information,” Hughes explained. “It’s not about healthcare, it’s about ownership of care.”

Hughes thinks these problems could get worse if efforts to fully privatize the VA are successful. President Donald Trump has supported privatizing the system, and has called to make permanent the Veterans Choice Program, an experiment Congress launched in 2014 that gives vouchers to veterans to see private doctors, while cutting other parts of the agency. These developments have provoked concerns that Trump will usher in a full private sector takeover.

“I worry that my care will become a profit motive,” Hughes said. “And that means it’s not about me anymore, it’s about making money.”

Now Hughes’ organization, About Face: Veterans Against the War, has joined other veterans’ groups, unions and healthcare advocates to launch a campaign to stop the privatization of the VA. After several months of building the coalition, the mobilization now includes Veterans for Peace, Service Employees International Union, the American Federation of Government Employees (AFGE) and National Nurses United. Healthcare advocacy groups including the Illinois Single Payer Coalition and the Democratic Socialists of America Healthcare Working Group have also joined the campaign. When the organizations came together on March 1 to hold a panel event in Chicago, more than 100 people showed up.

The combination of unions and veterans’ groups is potent. “We as veterans can argue and demand things and raise issues that the unions can’t, and the unions can inform us about issues that we don’t understand,” Hughes said. “We’re seeing outside, and they’re seeing inside of the system. We’re able to have this inside/outside strategy that I think is really a winning strategy.”

Organizers believe the time is right to invest in that teamwork now. “It came to our attention last fall that things under the Trump administration have been getting really bad,” Roberto Clack, an organizer with the Right to Heal VA Campaign, told In These Times.

“There are problems with the VA, but the VA works,” Clack said. “It provides quality care for the people that use it, and it saves lives.” A 2016 RAND Corporation analysis found that the VA provides good quality care compared with other health systems, usually in a timely manner. Private providers, on the other hand, could expose veterans to lower-quality care, longer wait times and doctors who aren’t familiar with military service.

“We agree that it could be better,” Clack said, “but the way to make healthcare better is to have a fully supported VA, funded VA, and staffed VA.”

Privatizing the VA wouldn’t just risk veteran’s healthcare, however. It could also threaten the unionized public sector employees who work for it. AFGE represents more than 700,000 federal workers, 250,000 of whom work at the VA. It would be “a serious death knell for unionization in this country,” said Anne Lindgren, president of AFGE Local 789.

But the idea that the VA doesn’t work has become embedded many media reports and the general public. “What we’re really up against is debunking the narrative that it’s just this broken system,” Clack said.

So while the long-term goal is to block the privatization of the agency, the short-term goal is to raise more awareness. “We recognize that [stopping privatization] is a big elephant, and you can’t eat an elephant in one bite, you need to eat it in small bites,” Lindgren said. “For that to happen we need to educate and organize the public.”

After the launch event, the groups held a call-in day to have people contact their members of Congress and urge them to oppose a currently bill that would expand the Choice program. Next will be actually visiting members of Congress. “Frankly we’re going to take this to the streets and let not only Republicans know, but also Democrats who are vacillating on this issue, you have to have a firm ‘no’ on privatization efforts,” Clack said.

Participants also hope to create an organizing model that can be replicated in other cities and communities across the country. “We’re not going to win this fight if it’s just a Chicago fight,” Clack said. “We definitely want to see this organizing spread to other parts of the country.”

The goal is also to move their efforts beyond just saving the VA from privatization to making a proactive argument that the VA should be expanded and itself serve as a model for the whole country. “I believe our community of veterans organized has the potential to not just fight for our healthcare, but healthcare for everyone in this country,” Hughes said.

That’s why the launch event included activists who are focused on universal healthcare and a single-payer system. “The VA really resembles the closest thing there is to a single payer system in our country,” Clack said. It’s not just the largest hospital system and healthcare provider in the nation, but it’s also the only system that negotiates directly with pharmaceutical companies over drug prices, and it’s also a one-stop-shop for veterans seeking all kinds of care, from mental health to physical issues to social work.