The Judges Cops Want: These Candidates Have Been Endorsed By Chicago’s Police Union 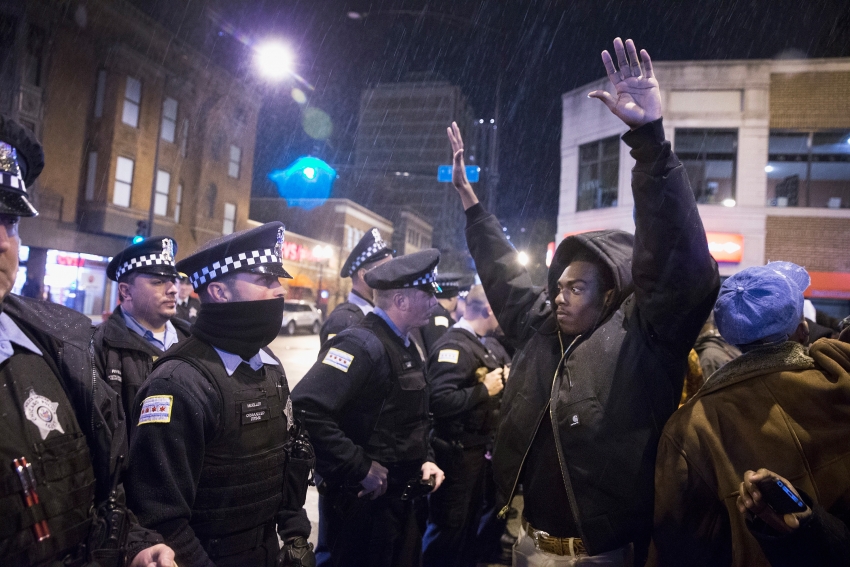 Demonstrators confront police during a protest over the death of Laquan McDonald on November 25, 2015 in Chicago, Illinois. (Photo by Scott Olson/Getty Images)

Last month, the Chicago Fraternal Order of Police, the city’s largest police union, released a list of candidates it is endorsing in the March 20 primary election.

The police union is also endorsing down-ballot judicial candidates, most of whom have little-to-no name recognition among Cook County residents. Of those 22 down-ballot endorsements, eight are either family members of Chicago police officers, “friendly” assistant state’s attorneys, or lawyers who have done work for the police union in the past. Many of these endorsements, which were posted to the FOP’s Facebook page on February 16, are for career prosecutors who largely side with police.

One of the candidates the police union is supporting is Brian T. Sexton, a former Cook County prosecutor who was “chided by a U.S. District judge in 2016 for falsely testifying in a federal civil rights trial about past testimony of a gang expert,” according to Injustice Watch, a not-for-profit journalism organization that conducts in-depth research exposing institutional failures that obstruct justice and equality. The allegedly false statements Sexton made were during the retrial of Nathson Fields, who maintained his innocence for a double murder that led to two criminal trials and three civil trials before Fields ultimately won a $22 million jury verdict of wrongful conviction.

Sexton is also currently representing Chicago police officer Thomas Curran in an Illinois Northern District Court case filed by Alma Benitez—who was a witness to the fatal shooting of Laquan McDonald in 2014. In her lawsuit, Benitez alleges Curran and other Chicago police officers detained her at a police station for hours and pressured her to change her story after officers had become “aware that Plaintiff had attempted to record the incident in a video and/or photos,” according to the complaint.

This is Sexton’s second campaign for a judicial seat since 2008. He did not immediately respond to a request for an interview.

Colleen Reardon Daly, another of the FOP’s endorsements, notably represented Chicago police officer William Pruente. He was caught “lying in court at a drug hearing in March 2014 when a defense lawyer pulled a surprise and played a video of the arrest in suburban Glenview that contradicted testimony from the officer and three other cops,” according to the Chicago Tribune. As a result, Pruente was convicted of perjury.

“We know the relationship between officers and prosecutors, they often work hand in hand,” says Timmy Rose, a member of the People's Response Team, a multi-racial, intergenerational group committed to supporting efforts to end police violence in Chicago.

"The police union is essentially a lobbyist who is pro-incarceration and pro-criminalization," says Rose.

Chicago’s police union is no stranger to politics. In the past, the union—which represents a majority of the city’s  approximately 12,000 rank-and-file officers in union bargaining with the city—has also spent a considerable amount of time and money lobbying to change state laws to protect its membership from public scrutiny.

Examples include leveraging the union’s “behind-the-scenes clout” to keep investigations of officer sexual assault misconduct like rape within the Chicago Police Department and away from independent investigators; getting the Illinois legislature to pass an officer “bill of rights” which makes many police union contract protections state law and frustrates police reform efforts; and fighting against the widespread rollout of officer-worn body cameras.

Fraternal Order of Police Vice President Martin Preib, the police union’s media spokesperson, did not return a request for interview regarding the FOP’s endorsements.

Injustice Watch reviewed every judicial candidate running in the March primary, determining that at least two of the candidates the FOP is backing are attorneys who are less than qualified for the judicial seats they’re hoping to win.

For instance, Amanda Moira Pillsbury, a career prosecutor at the Cook County State’s Attorney’s Office who is currently assigned to felony trials, was found to be not qualified by the Illinois State Bar Association (ISBA) because, while “she is knowledgeable and a good litigator,” the “extent of her involvement in complex matters and the depth of her experience” is questionable.

The FOP-backed candidate Michael O'Malley is a Cook County assistant state’s attorney in the civil action unit who has previously worked in the office’s public corruption and financial crimes unit. The Chicago Bar Association repeated its 2016 negative rating of him and advised that “additional practice experience will better prepare him for service.”

O’Malley and Pillsbury did not respond to requests for comment.