Under Fire from Unions Over MTA Comments, Cynthia Nixon Says She Wants Sacrifices from Billionaires 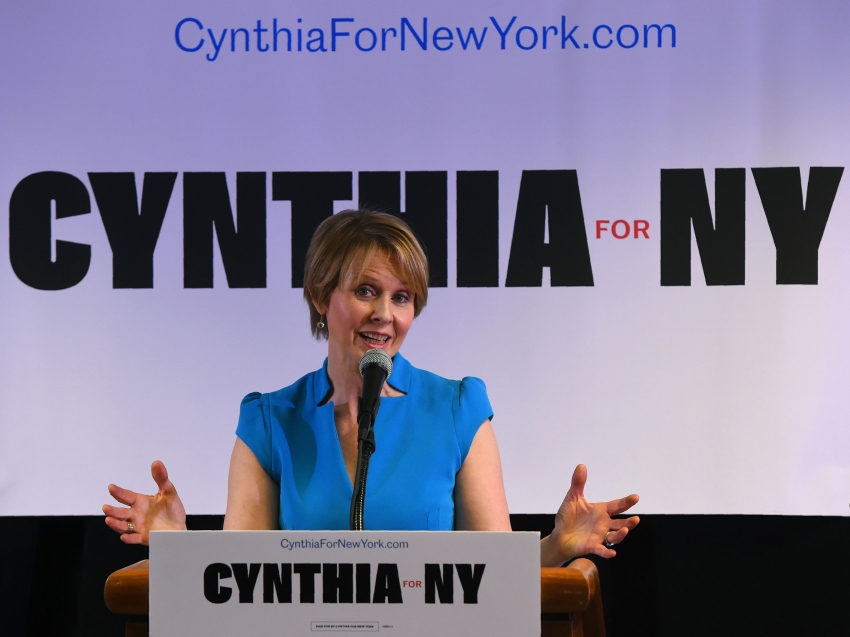 Cynthia Nixon speaks to people at the Bethesda Healing Center in Brooklyn, New York on March 20, 2018 at her first event since announcing that shes running for governor of New York. (Photo credit should read TIMOTHY A. CLARY/AFP/Getty Images)

Speaking with a local news reporter this week, recently-announced New York gubernatorial candidate Cynthia Nixon, an actress and education activist best known for her role as Miranda Hobbes on the HBO series Sex and the City, was asked for her thoughts on how to fix the MTA, the city’s state-funded and oft-beleaguered public transit system. “The unions have to understand … with the deals that they have now,” she said, “you can’t hope to make improvements to the trains in a fiscally responsible way … Everybody’s got to pull together, and everybody’s got to make sacrifices.

“Instead of attacking unions and the contracts they negotiated in good faith with their employers, Ms. Nixon should recognize the contributions of a highly trained and skilled workforce,” Cilento continued. “It is astounding at just how misguided and uninformed Ms. Nixon is on the vital role working men and women play in the economic and social well-being of our great state.”

The TWU issued a similar statement, with President Tony Utano scolding, “If Cynthia Nixon is talking about transit workers and wants to learn about our sacrifices, she should attend the funerals of the two transit workers who were killed on the job in the last eight days.”

Nixon—a longtime member of the Screen Actors Guild—exclusively told In These Times Friday in a statement sent over email that, “I am and have been a proud union member for forty years. My wife Christine was a union organizer. I opposed Governor Cuomo’s vile attacks against teachers and public sector unions during his first term,” referencing the governor’s active backing in 2014 of a generous set of protections for charter school operators. “I always have and always will stand with working families and my union brothers and sisters.”

On the MTA system in particular, Nixon added, “Union families should never have to foot the bill for Cuomo’s mismanagement of the MTA.” She said she is prepared to go after the “cronyism and mismanagement that has led to a neglected, congested system where transit users, taxpayers and workers are left holding the bag.”

Nixon's team said the statement provided is not meant as an apology for her previous comments, emphasizing that this statement is intended to clarify her position on fixing New York's transit system.

Nixon's statement appeared to refer to several facts uncovered by an extensive investigation by Brian M. Rosenthal for the New York Times late last year. The probe found that contracts negotiated between the state, MTA contractors and unions included payment for work, such as repairs along a 3.5 mile stretch of the Long Island Railroad, that could not be proved to have been needed. “The leaders entrusted to expand New York’s regional transit network have paid the highest construction costs in the world, spending billions of dollars that could have been used to fix existing subway tunnels, tracks, trains and signals,” Rosenthal noted.

Several transportation experts and contractors the Times spoke with observed inflated contracts and staffing. One tunnel-boring machine in the city, for example, was operating with upwards of 20 staffers, where in most cities that machinery would be run with fewer than 10. “I’m the union, and sometimes I’m saying to myself, ‘What the hell are they even doing?’” Richard Fitzsimmons, a Local 147 business manager, told the Times.

The report further contrasted the conditions governing the MTA with the Parisian Metro system, where workplace protections are notoriously strong. A construction project in Paris, France that involved similar work and goals as the Second Avenue Subway, which opened last year in Manhattan, cost $450 million per mile, compared with the $2.5 billion per mile spent on the MTA expansion project.

“Construction companies and consulting firms,” Nixon says, “drive up the costs because they get a cut as profit for themselves. Then they turn around and donate massive amounts of money to politicians like Andrew Cuomo. It’s a pay-to-play system that lines the pockets of people on top while working families pay the price. … The lack of funding to fix our subway system and shortchanged safety measures means the jobs of our union workers become that much harder and dangerous as workers struggle to keep the trains running with too few hands on deck.”

As the Times investigation also highlighted, construction companies and consultants that handle MTA contracts have donated generously to Cuomo over the course of his administration. The New York Daily News, in a recent report, found that Tully Construction Co. was recently awarded a $282.5 million MTA contract this month. After submitting the lowest bid for the tunnel repair project, they added on an additional $68 million. Company head Peter Tully has given more than $221,000 in campaign contributions to Cuomo. In total, Tully Construction has collected $468 million in state Department of Transportation contracts.

Cuomo has also collected roughly $890,0000 from two dozen of his political appointees—including to the MTA board—along with $1.3 million more from those appointees’ spouses, children and businesses.

This week’s exchange highlights what an uphill battle Nixon could face in gaining support from organized labor in New York. Since she declared her candidacy, a number of the state’s unions, while stopping short of full-on endorsements, have issued glowing praise of Cuomo to the press. “We have to complete our internal process, but I am totally confident that the union will be 100 percent with the governor,” Bob Master, assistant to the vice president of the Communication Workers of America District 1, told Politico. “He has been a steadfast ally, he has stepped up whenever we’ve asked his assistance and he’s delivered for working people,” Master added.

SEIU 32BJ president Héctor Figueroa offered similar praise: “We are going through our internal endorsement process at 32BJ but we fully expect that the governor’s progressive record of standing with working families—the strongest of any governor in the country—will earn him our members’ support.”

A longtime labor operative in New York state, who preferred to speak anonymously given their ongoing work in state politics, wasn’t surprised by the pile-on of support. “It’s very widely known that the governor and his team are extremely aggressive in making calls to their allies to be public in their opposition” to his political opponents, the source told In These Times. “In all fairness, labor leaders have to make some hard decisions for their members, and the relationship between existing government leaders is vital.”

Given labor's close ties to Cuomo -- and that most union endorsement processes are ongoing -- finding labor operatives willing to go on record questioning union support for the governor can be difficult.

While his administration has seen the passage of a plan for $15 minimum wage, paid family leave and, just recently, a gradual increase to a $19 wage for airport workers, Cuomo’s relationship to unions hasn’t always been unambiguously friendly. Before his 2014 charter school push, Cuomo made challenging union power in Albany one of the mainstays of his 2010 gubernatorial campaign. As the New York Times wrote of an interview they did with the governor shortly before that election, Cuomo pledged to “mount a presidential-style permanent political campaign to counter the well-financed labor unions he believes have bullied previous governors and lawmakers into making bad decisions.”

As “right to work” efforts were being rolled out in states like Wisconsin and Michigan, Cuomo also accepted tens of thousands of dollars in campaign contributions from David Koch, an influential conservative donor who has funded anti-union efforts around the country. During her first speech as a candidate, Nixon quipped that “The Koch brothers donated $87,000 to Andrew Cuomo when he first ran in 2010 because they knew a good investment when they see one.”

Of Nixon’s comments about the MTA, the labor source says that the gubernatorial candidate “potentially touched on a nerve inadvertently. Because the transit system situation is so fraught, labor unions are extremely sensitive that their workers being used as scapegoats to hide what the needs are for the subway: more money for infrastructure, and more support.”

“It’s natural to have a learning curve when talking about labor,” the source continued. “Everything you say is not going to be perfect, and what campaigns do is use whatever gaffe that comes out to say this person will be anti-labor. I haven’t seen that from her.”

On Cuomo, the source said, “I think he’s nervous … the narrative here is that, ‘If she wins, the whole world will come apart. We’re delivering. We have a good plan. We’re working hard together as a movement. We can’t shake things up, and we need you to be out there. This is a candidate that doesn’t have what it takes to become governor.’ It’s not a fair way to do it. The labor movement is not at the whim of the governor, but there is pressure.”

The source also observes that Cuomo has a history of becoming more overtly pro-labor around election seasons, noting that the governor became more explicitly progressive after his primary challenger in 2014, Zephyr Teachout, garnered 34 percent of the vote that year. “I think the shift was very real when he realized the power unions and labor have,” the source told In These Times. “What he realized is that he could not take that relationship for granted.”