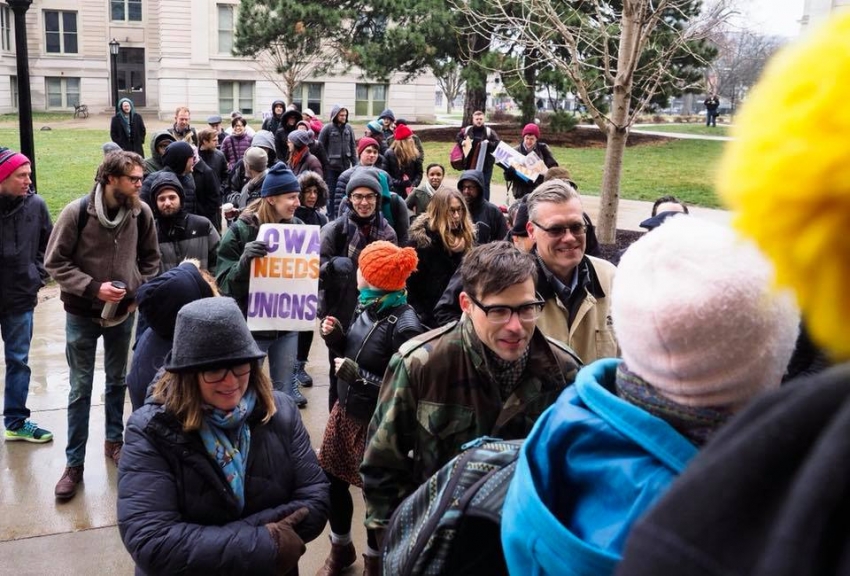 On April 18, non-tenure-track teaching staff at the University of Iowa marched with supporters through cold and sleet to deliver demands and a signed letter of support to University President Bruce Harreld’s office. The action was part of Iowa contingent faculty’s campaign for union representation, in response to what workers characterize as policies of overwork and underpayment.

If their effort succeeds, Iowa’s contingent faculty would become the latest local to be organized by the Service Employees International Union’s (SEIU) Faculty Forward movement, part of a growing wave of union votes and organizing action by graduate students, adjuncts, and other untenured instructors at public and private institutions across the country.

Such labor action in Iowa—a longtime “right-to-work” state where public employees have been organizing in the face of budget cuts, a GOP-dominated government and increasingly restrictive labor laws—might be the best picture of what union organizing might look like if the Supreme Court rules against collective bargaining fees in Janus v. AFSCME, the crucial labor case the Court will decide this year.

Many observers expect a conservative ruling in Janus, barring unions from charging non-members “fair share fees” to cover the costs of contract negotiation. A ruling against AFSCME would hit many unions in the pocketbook and could open the door to further state- and federal-level attacks.

“Having had this much experience living in that regime, it is something that people can look at,” says Paul Iversen, an attorney and educator at the University of Iowa Labor Center who is not involved with the SEIU campaign.

In a right-to-work state like Iowa, Iversen says, “there’s a constant need to be talking to people and recruiting people to be involved, because you can’t rely on their financial support. That’s somewhere the public sector labor movement will have to be nationwide if quote-unquote right-to-work becomes nationwide.”

Iowa was a right-to-work state before the category officially existed: anticipating the passage of the 1947 Taft-Hartley Act, which allowed states to ban union shops, its part-time legislators rushed out a right-to-work bill before recessing for the year.

Despite 70 years of right-to-work, Iversen calls Iowa’s labor movement “vibrant and active.” Its rate of public and private sector unionization is not dramatically lower than the nationwide average, and some private workplaces remain over 90 percent unionized.

But recent changes to Chapter 20, the state’s public employment relations law, took direct aim at public-sector workers. Among other changes, the list of required bargaining topics has been sliced to just one: base wages, the rates paid to newly hired workers in a particular job.

The list of prohibited topics under Chapter 20 has soared from one—pensions, which are covered by separate state statutes—to a much broader seven, covering “insurance, supplemental pay, transfer procedures, evaluation procedures, procedures for staff reduction, subcontracting public services, and payroll deduction for union dues or political action committees.” All are now out of bounds for public unions to negotiate.

When employers and public workers reach a bargaining impasse, the matter goes to arbitration, where wage increases are capped by the new law at 3 percent or a cost-of-living increase—whichever is less. And Iowa law now requires majority support within the bargaining unit, rather than from a majority of voters, meaning all non-voters are treated as if they oppose the union by default.

But Iowa’s public unions remain popular. In 2017, Iversen says, 98 percent of voters (about 85 percent of all eligible employees) voted to support their union in the first round of recertification elections under the new, more restrictive laws. Although non-voting employees were tallied as “no” votes, the union won recertification by a landslide.

At the University of Iowa, contingent faculty believe they have a “strong majority”  under the new rules. Of about 380 eligible faculty in Iowa’s College of Liberal Arts and Sciences, 197 have already signed a letter in support of the union.

“To be honest, I didn’t need much convincing,” says Anne Sand, a lecturer in rhetoric. “Teaching loads are incredibly heavy, and pay has been stagnant.” Sand, says the university “has been cutting costs at the margins” with low non-tenure-track wages and the closure of tenure lines.

"What’s happening here is what’s happening everywhere in corporate education,” says Megan Knight, an associate professor of instruction in rhetoric. “It’s the privatization of a formerly public good. Twenty years ago, I was the only contingent member of the faculty in my department. We’ve utterly flipped that around.”

Sand, who spoke at Wednesday’s march, says she saw wide support from the university community, including graduate and undergraduate students and tenured and tenure-track faculty. Iowa’s budget crisis has “significantly raised political awareness” among her students, she says, as have recent changes in state law like those to Chapter 20.

“I was immediately impressed by how many people were there, and the energy of this campaign,” says Elizabeth Weiss, a lecturer in interdisciplinary studies who also rallied on Wednesday. Weiss believes Iowa’s growing reliance on lower-wage, untenured faculty hurts undergraduates. She says overworked contingent faculty rarely have the time or resources to give their students the detailed feedback and careful assistance they need.

“It’s a great deal of work for very little pay, it’s hard to keep my head above water, and it’s just not sustainable,” Weiss says.

The marchers’ demands, which Sand and Weiss helped deliver to Harreld’s office, include health insurance, paid family leave, retirement benefits and standardized yearly raises—many of the hallmarks of conventional employment.

In an email to In These Times, a University of Iowa spokesperson pointed out that the university had recently approved a new policy meant to expand lecturers’ rights. That policy, drafted by Iowa’s Faculty Senate, saw wide support, but didn’t address salaries directly.

“The contingent faculty at the University of Iowa make a fraction of what tenured and tenure-track faculty make, and an even tinier fraction of what administrators make,” Knight says. Knight, who has taught at Iowa since 1998, lacks tenure. Her “Associate Professor of Instruction” title was established as part of the university’s non-tenured “instructional track.”

Shrinking budgets at the university haven’t kept administrative salaries from growing. President Harreld, a former Kraft Foods executive, draws a $590,000 base salary, plus a $1 million, five-year deferred compensation package, bringing the total value of his contract close to $800,000 per year. Iowa’s Board of Regents pushed through his controversial 2015 appointment—Harreld lacks a background in academic administration—despite critical statements and opposing votes from Iowa faculty.

Harreld committed in 2017 to raising salaries by earmarking an additional $4.9 million for faculty salaries, which the university acknowledges are below median for its peer group. The unionizing instructors note that those increases don’t apply to them. The funds explicitly exclude non-tenure-track faculty, whose raises “will be based on performance and competitive marketplace conditions and available funding.”

“It’s frustrating to be lectured on the budget by people who make every month what I get paid in a year,” Weiss says, “and it’s frustrating to feel as though those of us who have the least stable and least secure teaching jobs on campus are expected to make the sacrifice.”

Some faculty report the closing of tenure lines by the university, where the proportion of non-tenure-track faculty has been on the rise for at least a decade.

The University of Iowa faces a Republican legislature and governor—the university spokesperson noted “declining state support” in its email to In These Times, a familiar narrative across many states where public funding for higher education has dropped alongside union membership rates.

Iversen, of the Labor Center, recalled that Iowa’s original Public Employee Relations Act of 1974 was voted in by a Republican legislature and signed by a Republican governor. When labor enjoyed wide public support, he said, there was “a different view toward employer-employee relations”—and that support can put a damper on red-state hostility.

But the efforts of billionaires Charles and David Koch, through groups like Americans for Prosperity and the American Legislative Exchange Council, have transformed Iowa’s politics. Recent Republican governments have been far more aggressive toward labor: Iversen describes Iowa’s new GOP as being “in lockstep” with the Kochs, with little regard for constituents at town halls and public hearings.

Although Janus places union funding under threat, thriving organizing in higher education, along with a new movement of red-state teacher strikes, have given union supporters in education cause for optimism. Iowa, where SEIU member Cathy Glasson is mounting an insurgent campaign for governor, is displaying some of that same energy.

“There’s certainly not anything good about right-to-work,” says Iversen, “but if they try to throw up laws that try to stop working people from being able to affect their terms and conditions of employment, then working people say, bullshit, we’re going to get together and have that effect.”

“Whether there’s a law that particularly allows it or not,” he says, “we’re still going to get together, assert our humanity, and say, look, you have to treat us as well as the machines that we’re operating.”