Inside the Closed Facebook Groups Where the Teacher Strikes Began 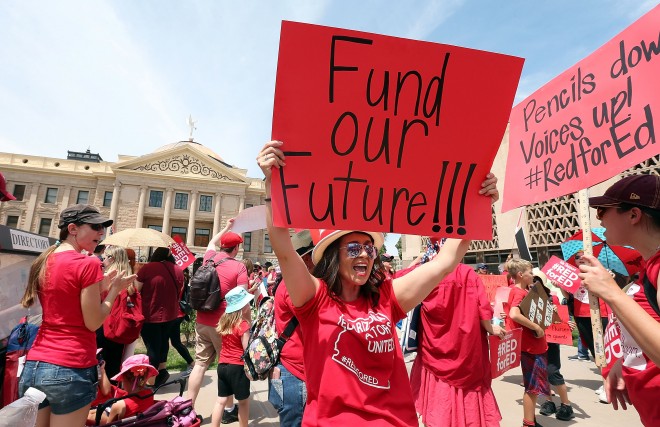 "Facebook is ultimately a business, making it a flawed organizing tool for workers ... But in the meantime, I’ll be helping teachers on Facebook." (Photo by Ralph Freso/Getty Images)

When Detroit teachers organized their January 2016 “sickout” to protest “abominable” neglect of their schools and classrooms, they created a Facebook group to organize. Teachers have done the same throughout the wave of protests and strikes that have swept West Virginia, Oklahoma, Kentucky and Arizona, providing needed advice, support and encouragement in trying to change their national and local unions.

With Facebook’s privacy violations and fake news in the headlines, the impetus to #DeleteFacebook is easy to understand. But this strategy is an individualistic, consumerist response to a political problem—lack of stringent government regulation—and ignores how invaluable Facebook has been to teachers and school employees organizing their walkouts. Facebook’s ease of use and accessibility have encouraged the explosive growth of movements across geographical distances that make in-person meetings impractical, and across the boundaries of school districts that often reflect social and economic stratification.

As an academic and activist in education and labor, I’ve been invited into several Facebook groups as a friend and, often, adviser. How do they form? A relatively small number of teachers and school employees, frustrated about their union’s (in)action, create a Facebook group, choosing to make it “open” (the public can see and participate), “closed” (the public can see the group but only approved members can read and make posts), or “secret” (participation is limited to those invited privately).

In these groups, teachers and school workers often express outrage at the lack of respect shown them and their students, as reflected in salaries that don’t provide a living wage, insufficient pensions, and deteriorating conditions in classrooms and schools. Facebook groups become the forum and organizing space most state teachers unions have refused to provide. Disillusionment with unions punctuates these conversations, the reasons familiar to anyone who has taught in the past 20 years: The unions are “irrelevant” to what matters in their workday; the union doesn’t “advocate” for them. This is not to dismiss the role of local union activists on the county or city level, who are often key in coordinating the Facebook pages.

For the most part, discussion and decision-making are extraordinarily democratic, in contrast to the secretive functioning of the state teachers unions. Within minutes, even seconds, after someone posts a concern—like, “Where is the money coming from to pay for what we’re demanding?”—replies follow with ideas that range across the political and social spectrum. Some teachers self-identify as “conservative” and Republican, mostly as background to explain their outrage and disappointment in Republican officials. Others post progressive comments and links with background analysis about the Koch brothused its survey function to gauge and build consensus. Before deciding on an action, administrators posted one or two questions, like, “Are you willing to walk out on X if we have not been given Y?” Everyone in the group could vote, and the outcome was tallied and reported.

In contrast, when the Oklahoma Education Association announced survey results indicating their members wanted to return to work, angry members objected that the poll had been misleading and unrepresentative.

Facebook is not without downsides. The people who create and administer pages are self-appointed, often maintaining leadership by force of personality and ideas. One administrator unilaterally shut down a page for hours because she detected “noise,” meaning discussion that diverged from her strategy and challenged her control. In Arizona, however, the page is essentially administered by a steering committee, a form of collective leadership that is more democratic.

Another limitation of closed pages is that they shut out allies who could share strategies and tactics or offer critical on-theground support. For instance, the savvy involvement of Save Our Schools Kentucky, which counts parent, community and teacher activists as members, has been essential to opposing vouchers and charter schools. But Save Our Schools Kentucky’s non-teacher members, as well as its network of civic allies, could only communicate indirectly with the school employees’ Facebook page.

Facebook is ultimately a business, making it a flawed organizing tool for workers. An independent platform hosted by unions would be ideal. But in the meantime, I’ll be helping teachers on Facebook.