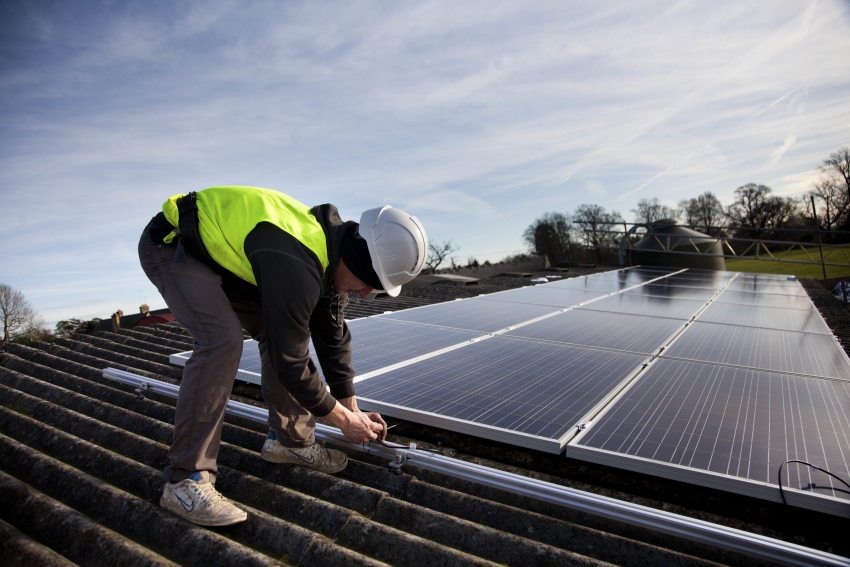 A climate jobs guarantee might be the last, best hope to quickly marshal public support and resources behind climate action. (Photo by In Pictures Ltd./Corbis via Getty Images)

With global temperatures rising and midterm elections approaching, 2018 is the year the climate movement must take bold action towards a fossil-free future.

Across the country, young people face daily reminders that our society doesn’t serve our futures. We suffer from unemployment and underemployment that is well beyond the national average, with young people of color struggling disproportionately to find work and economic opportunity. We are straddled with historic student loan debts. And in a moment when we should be working quickly to avert climate catastrophe and transition to an inclusive, fossil-free economy, many of our elected officials remain passive as the Trump administration attacks our air, water and land.

As youth leaders in the climate justice movement, we believe now is the time to embrace a bold political vision that addresses climate change while working to end racialized economic inequality.

A centerpiece of that vision is a federal jobs guarantee, a policy through which the government directly employs anyone who wants a job but doesn’t have one. The jobs guarantee has deep roots in the U.S. progressive tradition and is seeing growing support from scholars and movement leaders who tout its potential to put Americans to work while helping to rebuild our infrastructure, schools and healthcare system. With Sen. Bernie Sanders developing a jobs guarantee proposal, as well as a score of down-ballot candidates and Democratic presidential hopefuls also voicing support, the policy is sure to feature prominently in the 2018 and 2020 election cycles.

Climate scientists say that the next few years may be the only ones we have left to avert catastrophic global warming. A jobs guarantee program with a strong focus on stopping and preparing for climate change—a climate jobs guarantee—might be the last, best hope to quickly marshal public support and resources behind climate action. Simply put, this is a can’t-miss opportunity for the climate movement—and for our generation.

Toward a climate jobs guarantee

Solving the climate crisis will be no easy feat. It will require massive investments, to the tune of trillions of dollars over the next few decades—to transition toward a 100 percent renewable energy economy; to overhaul how we farm, transport and consume food; to restore depleted ecosystems; and to empower the communities already affected by the climate crisis to adapt to changes that cannot be reversed.

Each of these undertakings will also require massive job creation. A climate jobs guarantee has the potential to create a labor force that could be the engine of rapid decarbonization, and the services it generates can enhance communities’ resilience to climate impacts. Importantly, such a program can elevate those communities who have been systematically excluded from economic prosperity as well as those workers who risk being left behind by the transition to a renewable energy economy.

A climate jobs guarantee could be the climate movement’s “Medicare-for-All” policy—a universal program big enough to address the massive and complicated crisis of climate change, but still tangible and popular among the vast majority of Americans.

Like Medicare for All, a jobs guarantee is wildly popular. Polling firm Civis Analytics identified it as “one of the most popular issues [they’ve] ever polled,” with a majority of Americans’ support, and with disproportionate interest among low-income groups and communities of color, who tend to bear the brunt of unemployment, underemployment and climate chaos. While we’ve seen growing momentum around calls for 100 percent renewable energy and keeping fossil fuels in the ground, a jobs guarantee is the most promising means of popularizing the deficit spending and enlarged role of government that rapid decarbonization of the economy will require.

Framing the climate movement’s efforts around empowering Americans from all walks of life to build an inclusive economy will not only garner more popular support for climate justice goals, it could also help build stronger relationships with labor, economic, social and racial justice movements which will likely also throw their weight behind such jobs program proposals. The climate jobs guarantee offers an opportunity to strike down one of the deepest fissures on the left, that between some labor and environmental activists. By hammering home the message that we can put Americans to work solving the climate crisis, we can help end the fallacy that has long undercut our ties with labor and other allies—that access to good-paying jobs is incompatible with the well-being of our planet.

From vision to reality

While climate advocates have much to gain from embracing a jobs guarantee, this is no one-sided alliance. Existing jobs guarantee proposals can be significantly strengthened by embracing a climate justice lens.

A growing body of evidence suggests that many of the jobs needed to avert and prepare for climate change can be created relatively cheaply, and are jobs that last long term. More fundamentally, failing to curb and prepare for climate change will seriously compromise a federal jobs program, not to mention the stability of life on this planet as we know it. Superstorms, wildfires and droughts, which will worsen and multiply as temperatures rise, are already putting people out of work and destabilizing our economy. They also stand to cripple the infrastructure and healthcare system that many hope a jobs guarantee will support. And the low-income groups and communities of color that jobs guarantee proponents hope to reach will be hit hardest by extreme weather.

Many jobs guarantee proponents mention tackling climate change as one of many social goods that such a program could produce, but they have yet to fully map out what they understand “tackling climate change” to mean. To ensure that climate change is meaningfully embedded in whatever proposal progressives coalesce around, the climate movement needs to play an active role in helping to guide the development of such a proposal, and mobilizing Americans to make it a reality.

The climate movement must align around and articulate our priorities for a climate jobs guarantee and develop a strong case for how and why to include them in existing proposals. This will mean expanding the debate beyond its current focus on green infrastructure projects, which are essential, but cannot fully address the myriad ways Americans will experience climate impacts. Instead of new roads and seawalls, many communities will require other services to effectively adapt, including access to affordable, healthy food, care for the elderly and other vulnerable populations, and stronger school systems to enable younger generations to transition from climate-vulnerable livelihoods.

Our generation is in desperate need of good, well-paid jobs and of a future that will be livable on this planet. And there is so much good work to be done to stop climate change. A climate jobs guarantee is the solution America needs for our overlapping climate and employment crises, but it’s up to our movements to build the political support to make such a policy a reality. Let’s get to work.

Varshini Prakash has been an organizer in the climate justice movement for over 5 years, first leading fossil fuel divestment campaigns at the local and national level and then moving on to found and direct Sunrise. She currently serves as the Communications Director. Varshini lives in Boston, MA. Sarah Meyerhoff supports the Sunrise Movement's policy and communications work. She is based in Washington D.C., where she also works in reproductive health policy.