As the School Year Begins, More Teachers Across the Country Could Soon Strike 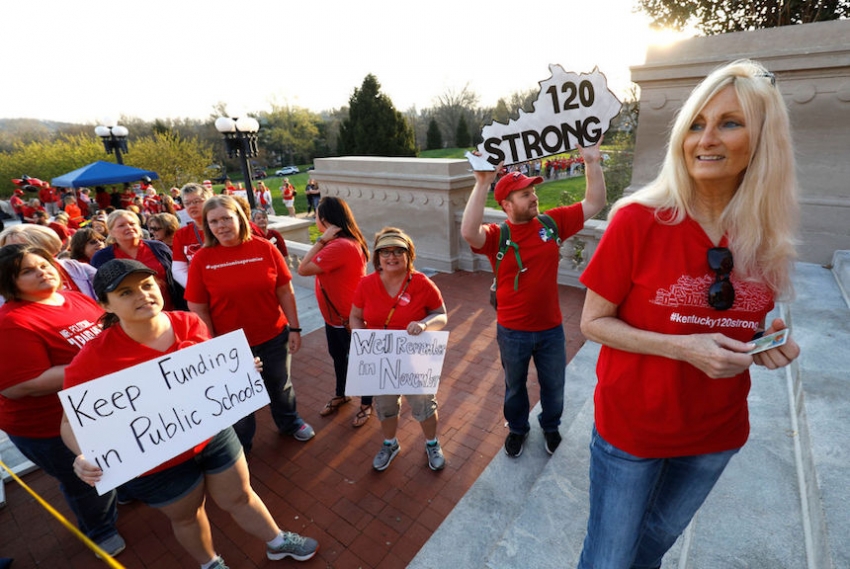 As the school year starts, teachers in states across the country are taking moving toward taking militant action. (Photo by Bill Pugliano/Getty Images)

As teachers, school employees, and students head back to school, what’s ahead for the #RedforEd movement?

This spring, teachers mobilized on an unprecedented scale in West Virginia, Oklahoma, Kentucky, Arizona, North Carolina, and Colorado. They protested, walked out, and even held statewide strikes—in states with limited to no collective bargaining rights, where school unions have traditionally focused on state politics.

The springtime actions, led by rank and filers, inspired educators and unionists across the country. It looks like the cusp of a labor upsurge that could spread beyond schools.

The mobilizers met with varying degrees of support or resistance from their own state union leaders. The militancy made leaders anxious, but many were also savvy enough to see that the uprisings were effective—and that they’d better not get in the way.

Teachers saw just how powerful they can be when they act collectively. But now with midterm elections coming up, the impulse to turn toward electoral politics—and a strong push from statewide education unions to elect new faces into the statehouses—presents a challenge.

Will members go back to thinking that power resides mainly in electoral politics? Or will their newborn rank-and-file movement be able to use ballot measures and elections to extend their networks at the grassroots?

Here’s a state-by-state rundown of where the campaigns stand and what it might mean for ongoing organizing:

While West Virginia teachers were furious at Governor Jim Justice’s initial offer of a 1 percent raise, their nine-day strike was prompted in large part by cost increases in their state health plan, the Public Employees Insurance Agency (PEIA).

Now the teachers are awaiting recommendations from the PEIA Task Force, established in the March agreement that ended the strike. With GOP heavies like Senate President Mitch Carmichael—teacher enemy number one—on the Task Force, many expect the recommendations to fall far short of what’s needed.

But teachers are getting ready, focusing on forming “really solid friendships and connections across the state,” said Jay O’Neal, a Charleston teacher who started the Facebook page that played a critical role in the strike. “We know we have to be a really bottom-up organization across unions, across each county, and across the state to withstand this.”

The teachers’ demands are the same as ever, he said: “a corporate tax, increase of the tax on extracting natural gas—this is the number one solution the task force heard from the people.”

Arizona’s week-long strike ended in May when state legislators added $400 million to the education budget, including a 20 percent raise for teachers.

“When we ended the walkout we said, ‘The fight’s not over,’” said Rebecca Garelli, a leader in the grassroots network Arizona Educators United.

The budget increase fell short of the demand, promoted jointly by AEU and the statewide teachers union, to restore funding to 2008 levels. So both groups worked all summer gathering signatures for a ballot initiative to fill the $700 million funding gap by taxing the state's richest residents.

Though it started as a Facebook group, AEU made the strike possible by developing a structure of contacts within schools to share information across the state. This same network allowed AEU to gather 150,000 signatures—all with volunteers. The statewide union got the remaining 120,000 signatures.

The measure is on the November ballot and teachers, in support of the initiative, are continuing to wear “red for ed” on Wednesdays—and taking it up a notch on Fridays by wearing vests, for #inVESTinEd.

Teachers who struck statewide in Oklahoma fell short of their demands for raises of $10,000 for teachers and $5,000 for support staff, plus $200 million in additional funding for classrooms.

But they did win a big raise, offered up in an eleventh-hour bid to stop them from striking. The raises are kicking in as the school year starts. Teachers will get a boost of at least $5,000 per year, and school employees will get about $2,500.

After this partial victory, the statewide Oklahoma Education Association pivoted towards politics. “The primary was exciting,” said Lori Burris, president of the local union for the Mid-Del School District, which includes part of Oklahoma City. “A lot of legislators were pushed out.”

From now through November, Burris said, elections are the focus. “After that we assess what our legislature looks like and figure out how we attack next.”

In Kentucky, teachers and school employees joined the spring uprising to defend their state-managed pension. They rallied at schools and at the capitol, and held scattered walkouts.

In the end, the state legislature passed a weaker version of the pension restructuring bill. It has since been thrown out in court, though the governor is appealing that decision. Through their mobilizations, teachers were able to win $85 million more for education funding.

Meanwhile, the governor’s education board announced that the state would try to take over the schools of its largest district, Jefferson County, which includes Louisville. Nominally on the grounds of poor student performance and safety concerns, the takeover would strip the elected school board of its authority and hand the reins to Kentucky’s chief school officer—a step that has been used in cities such as New Orleans and Detroit to open the door to charters and privatization.

Fresh from fighting pension cuts, the union is working with the school district to oppose the state takeover, which teachers say would undermine the busing system that is part of an ongoing effort to desegregate Jefferson County schools. Last night, the district reached a compromise with the state that will maintain local control.

“We knew they were targeting Black and brown communities,” said Jefferson County teacher Tia Edison. She said the state’s eventual goal is to privatize: “The second phase would be bringing in charter schools.”

The excitement of the uprisings sent ripples across the country. “Members started seeing West Virginia, Oklahoma, and Kentucky taking action, and said, ‘Wait, things are just as bad for us,’” said Amie Baca, president of the Colorado Educators Association. “We started to hear from the rank and file that we needed to do something.”

But each state had its own political limitations. In Colorado, the challenge was a Taxpayer Bill of Rights that restricts any tax increases to those approved by voters. In North Carolina, it was a vindictive GOP supermajority unlikely to respond to any demands.

So walkouts in those two states were less about winnable demands and more about teachers taking action together to expose how underfunded public schools are. Still, the experience of acting collectively has ignited ongoing work.

“We sparked people’s imagination that we can do things like this and be successful and not get fired for it,” said Todd Warren, the teacher union president in Guilford County, North Carolina. Teachers in his district were among the 30,000 who flooded the state capital in a May 16 walkout.

His union will be focused on the November election, in which teachers hope to disrupt the GOP supermajority. But Warren believes teachers need to stop focusing simply on elections and learn how to organize members in each school for power.

Because of the walkouts, he said, members have a new appreciation for the necessity of nuts-and-bolts organizing, including maintaining lists of co-workers, mapping the workplace, and setting up communication systems.

That means “moving from activists to organizers,” he said, “the difference between those who show up for a one-day event and those who want to do the nitty gritty work of building power.”

In Colorado, the walkouts spurred a ballot initiative to increase taxes on the wealthy and use those funds to support public education. The measure would deliver $1.6 billion for public schools. In July the Great Schools, Thriving Communities coalition, which includes the union, delivered more than double the required number of signatures to put the question on the ballot.

As educators across the country step back into schools this fall, the combative spirit that first took root in West Virginia is still spreading.

In Washington state, teachers unions in at least 13 districts have voted to authorize strikes to kick off the school year. A couple have since settled, but teachers in Longview, Evergreen, and Washougal are hitting the picket lines this week, with more districts likely to follow. Teachers in Seattle recently voted to authorize a strike.

In Puerto Rico, teachers struck on the third day of school, August 15, in an ongoing battle against school closures.

And in the nation’s second-largest school district, members of United Teachers Los Angeles are voting as we go to press on whether to authorize a strike.

With ballot questions and electoral politics the focus through November in many locations, the challenge for organizers is to keep members’ voices and activity at the center of their campaigns.

Barbara Madeloni is a writer for Labor Notes and Samantha Winslow is co-director of Labor Notes.