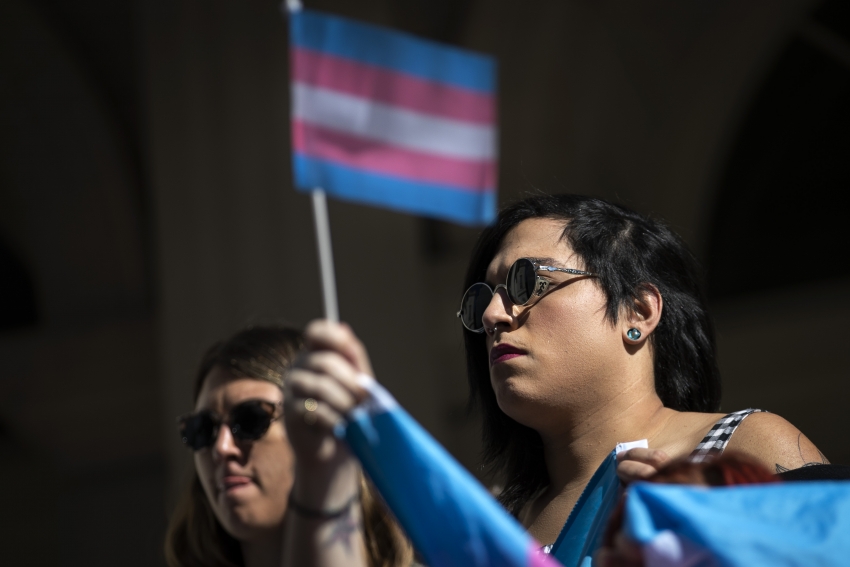 LGBTQ activists and their supporters rally in support of transgender people on the steps of New York City Hall, October 24, 2018 in New York City. (Photo by Drew Angerer/Getty Images)

A New York Times report this week revealed that the Trump administration’s assault on transgender, non-binary and intersex people has escalated. According to a memo circulating since last spring and recently obtained by the Times, the Department of Health and Human Services (HHS) is at the helm of an effort to define gender as either male or female, immutable and determined by the sex assigned at birth—a move that would dramatically roll back protections and recognition of people who fall outside the gender binary. The legal definition would fall under Title IX, the federal law that bars gender discrimination in government-funded education programs.

The change marks the latest development in the administration’s campaign to revoke preexisting U.S. gender-recognition policies, particularly regarding employment. In 2017, Trump rescinded an Obama-era executive order designed to restrict discrimination against LGBTQ employees of federal contractors. That same year, Attorney General Jeff Sessions argued that the Civil Rights Act of 1964, a federal workplace-equity law, did not protect transgender workers from discrimination. The Department of Justice would thus no longer side with transgender workers who sued their employers for discrimination on the grounds of the 1964 law.

Now, activists fear that HHS’s proposed definition may further corrode protections for transgender, intersex and gender-nonconforming people in the workplace. Non-discrimination law is already fractured and deficient: According to the LGBTQ-rights nonprofit the Movement Advancement Project, 48 percent of the LGBTQ population lives in states that do not prohibit employment discrimination based on sexual orientation or gender identity.

If the proposal advances, one of the most immediate and robust forms of recourse for workers will be the leverage of organized labor. According to LGBTQ labor nonprofit and AFL-CIO constituency group Pride at Work, union contracts are the only form of legal protection against employment discrimination for transgender people working in 33 states. (In those states, it’s legal to fire a transgender worker based on their gender identity.)

Union contracts, which are enforceable in all 50 states, can contain clauses that specifically address gender-identity parity. “You can get any kind of non-discrimination language put into a contract that’s then enforceable through the provisions of that contract,” Jerame Davis, executive director of Pride at Work, told In These Times. “Basic non-discrimination that includes protections for gender identity and expression go a long way toward mitigating these issues.”

This is essential for workers who face not only a greater risk of firing, harassment, and unemployment—which is approximately 16 percent for transgender and gender-non-binary Americans—but also depend on transgender-inclusive healthcare. Union contracts can remove exclusionary language from insurance policies. Relatedly, they can expand what an insurance plan covers in terms of care related to a gender transition, including hormone treatment, gender-confirmation surgery and mental healthcare. For example, the Service Employees International Union (SEIU) and hospitality- and service-worker union UNITE HERE have passed resolutions for transgender-inclusive healthcare.

In addition to these material concerns, Davis cited some of the more subtle forms workplace discrimination can take. These include intentionally misgendering people by inappropriately referring to them by their sex assigned at birth, Davis explained. In addition, employers who issue “male” and “female” uniforms may also coerce employees into wearing uniforms that don’t suit their gender identities.

Unions, too, can shield workers from these indignities, and can also codify gender-reflective access to restrooms. In 2015, the Occupational Safety and Health Administration (OSHA) issued a series of guidelines declaring that “every employee, including transgender employees, should have access to restrooms that correspond to their gender identity,” but these don’t constitute law, and gender-neutral or gender-appropriate restroom access isn’t mandated nationwide. “Aside from broad non-discrimination language,” Davis said, “most union contracts have a health and safety section in which language can be added to ensure trans individuals have appropriate access to facilities.”

While contracts are an integral source of worker recourse, Pride at Work cautions that they’re only as good as the efforts of workers to defend them—and that workers thus must strategize to protect their transgender and non-binary cohorts. The organization urges workers to take such strategic measures as placing pressure on unions whose health plans don’t include transgender-related care, vocalizing opposition to workplace harassment and striving to further organize unionized and non-unionized LGBTQ workers.

As of 2015, 15 percent of transgender workers surveyed by the National Center for Transgender Equality were unionized or had some level of union representation, compared to the national average of 12 percent. While the fraction is slim—a symptom of decades of neoliberal legislation in the United States—it’s possible for unions to leverage their power beyond the scope of the workplace, thus advocating for workers who aren’t unionized. The AFL-CIO, for instance, has endorsed transgender-rights legislation in Massachusetts and combatted North Carolina’s infamous (and defunct) 2016 House Bill 2, which would have denied transgender people access to appropriate restrooms.

Davis told In These Times that the AFL-CIO has a union lobbying operation in every U.S. state, allowing the organization to shape policymaking at the local, state, and national levels.

The HHS’s proposal has yet to pass, and it’s unclear when and whether it will. Given the gravity of the situation, however, union protections countering the federal government’s potential erasure of transgender and non-binary people have taken on a new level of urgency. “When the federal government is saying these people don’t even exist, it gives employers and other people in the community basically a license to discriminate,” Davis said. “The vast majority of trans people in this country would be left hanging with that kind of a definition in place.”