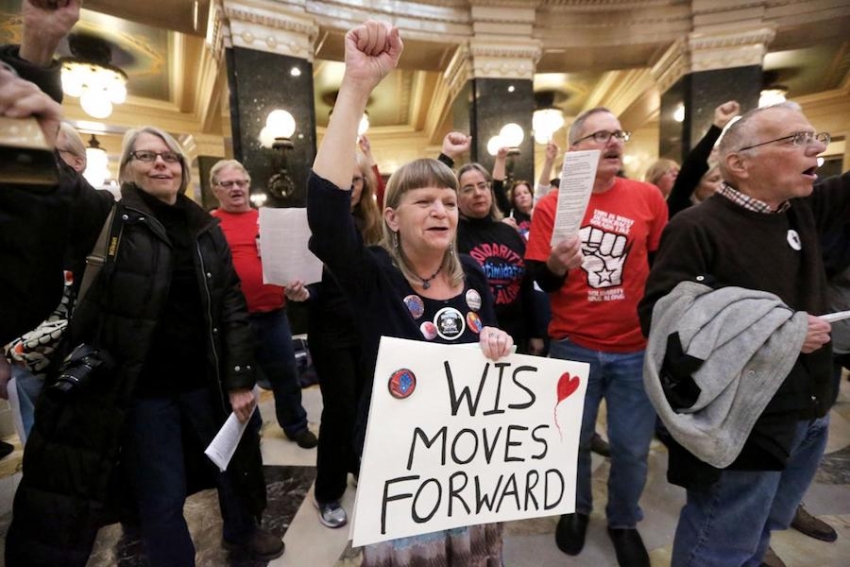 Peppi Elder celebrates Gov. Scott Walker's defeat with the other Solidarity Singers--who have met 1,999 times on weekdays at noon to protest Walker--at the Capitol rotunda in Madison on Nov. 7, 2018.   (Photo by Amber Arnold, State Journal)

Joy is the order of the day as 100 people or so congregate at the rotunda of the Wisconsin Capitol in Madison just hours after incumbent Republican Scott Walker conceded the gubernatorial election to Democratic challenger Tony Evers, a former teacher who heads the state's education department.

It's an emotional celebration. Old friends and allies greet one another with warm hugs, happy tears, cheers of delight and sighs of relief. They form a circle for, literally, the 1,999th gathering of the "Solidarity Sing Along," an hour-long, informal event held every Monday through Friday at noon.

Songs of solidarity and protest have filled the Capitol, buoyed spirits and lifted hearts during the eight years that purple Wisconsin bled beet red after the disastrous midterms of 2010. Upon taking office, Walker and statehouse Republicans immediately moved to strip public sector workers of union rights, spurring an uprising that erupted in February 2011 and continued into 2012 and beyond. Massive protests, bitter recall elections and multiple occupations of the Capitol captured the attention of the nation and the world.

Throughout it all, the historic bust of Fightin' Bob La Follette peered from its perch under the Capitol dome like the Ghost of Republican Progressivism Past. Between 1880 and 1924, this pro-worker, antiwar, lifelong Republican served as a district attorney, U.S. senator, Wisconsin governor and presidential candidate on the Progressive Party ticket. He fought for farmers, workers, public education, checks on corporate power and reforms to curb political corruption.

La Follette's bust became a touchstone and rallying point in 2011 for a new generation of Progressives who protested, got arrested and were exonerated for exercising their First Amendment rights to assemble, speak freely and "petition the Government for a redress of grievances."

Ron Edwards was among them. He is here still. And he's no spring chicken. Retired "oh, 10 to 15 years ago," Ron was a custodian at the University of Wisconsin Waisman Center and a member of AFSCME Local 171. He's been a frequent Solidarity Singer, whenever weather permits him to take the bus from his home eight miles away. He brings a cowbell—"it's the only instrument I know how to play"—and although he walks painfully with a cane, he can shake his booty with the best of them when the music moves him. He loves when impromptu bands pop in with banjoes and trombones. "You just keep making noise,” he says. “That's the best thing to do. I've been union all my life.”

Walker made a fatal error pissing off people like Ron, especially teachers, the highly-respected educators legally responsible for the K-12 kids in their care. Starting with the 2011 passage of anti-union laws and a new budget, Walker cut already-modest wages and benefits, as well as education funding, causing a rash of resignations and making replacements difficult to recruit. By 2016, a quarter of school districts reported an "extreme shortage" of qualified teachers. During his failing presidential campaign that same year, Walker compared protesting teachers to "terrorists," which only strengthened their resolve and the movement to invest in public education.

Retired teacher Donna Palmer is "really exhilarated for Wisconsin" now. Walker, she says, "broke the union. It was a very personal affront to democracy over which we are having a victory today."

Interviews become impossible as the crowd swells and echoes of boisterous songs bounce off the marble walls. Escaping to the quiet of a nearby "ladies room” is necessary to hear retired teacher Cee Cee Cohen, who is interrupted only once by a flushing toilet.

"I've been here at the Capitol since Day One," she says, "so this election is glorious. The fact that Walker was beaten by a teacher is the cream on top!"

As thrilling as defeat of an archenemy may be, activists here take nothing for granted. It's a "fool me once, fool me twice" kind of thing, the result of recalls and elections that came only so close to restoring the comity Wisconsin was once known for and the long-cherished progressive traditions that, before Walker et al, had been in place for more than 100 years.

Walker and Republicans also privatized public lands, slashed regulations and handed out huge tax breaks to corporate interests, including $4.5 billion to high tech company FoxConn—a move that left most voters cold. It was all done under the pretext of prosperity that, for most, never materialized.

Republicans will retain control of the legislature. That’s thanks to their gerrymandered districts and voter suppression laws, says Kevin Gundlach, president of the South Central Federation of Labor (SCFL, appropriately pronounced “scuffle”). “Now they are looking at ways to limit Tony Evers's powers as governor. The more we win, the more we force the Republicans to cheat!”

Victoria Gutierrez is "a proud union RN with SEIU Health Care Wisconsin" and an active SCFL delegate. She jokes about getting slightly buzzed later with a celebratory cocktail, but after eight years in the trenches, is under no illusions. "We needed this victory, but I don’t want the momentum to stop: There is so much work ahead to undo what Walker and company did these last eight years against Wisconsin workers. This was a momentary reprieve to regain strength to continue onward: One day longer. One day stronger!"

Bill Franks, chief steward emeritus of WPEC/AFT Local 4848, cautions that “re-establishing worker rights will be slow. Walker made his name decreasing compensation and increasing costs for 100,000 public sector workers by three quarters of a billion dollars. The effects on the state economy have been devastating."

Charity Schmidt was an activist with the Teaching Assistants Association at the University of Wisconsin when Walker launched his scheme to bust public sector unions. She went on a few years later to work with SCFL and is thrilled almost to the point of speechlessness about the election.

"Words can't adequately articulate the joy I feel watching Walker lose. Finally. But our narrow margin of victory means that we need to keep people engaged and push for political solutions to improve peoples' everyday lives."

In a delicious bit of irony with a side of karma, Walker can't contest that "narrow margin" because of a law he signed in 2016 to limit recounts. It's a hot topic among the Solidarity Singers and admirers who, accustomed to years of one-hour, lunch-break sessions, disperse quickly into the grey of the near-freezing autumn afternoon.

How different it is from the peak of the uprising in early 2011 when the Capitol and surrounding streets were jammed with as many as 150,000 demonstrators, often led by Wisconsin AFL-CIO president Phil Neuenfeldt.

Sadly, Phil died just two months after retirement and two days before the 2018 midterms. He missed the biggest, best protest of all—over 1.3 million strong—marching to the polls and finally prevailing in kicking Walker and his top officers to the curb.

Phil and Fightin' Bob would have loved that.