Denver Teacher: I’m On Strike to Build a Nationwide Movement for Public Schools 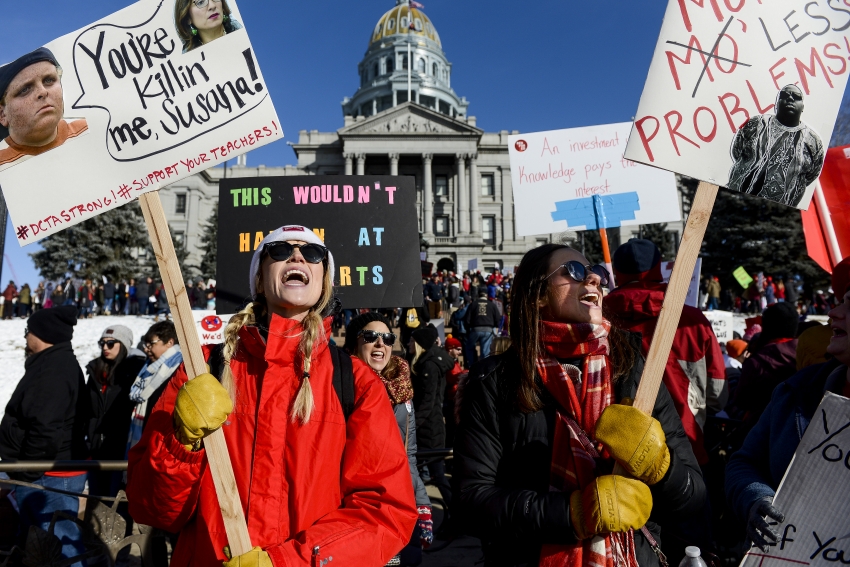 Bear Valley International School language arts teacher Kaitlin Christenson, left, and math teacher Meghan Clapp, right, lead a chant at an educator and community rally at the Colorado State Capitol on February 11, 2019 in Denver, Colorado. Denver teachers are striking for the first time in 25 years after the school district and the union representing the educators failed to reach an agreement after 14 months of contract negations over teacher pay. (Photo by Michael Ciaglo/Getty Images)

On February 11, public school teachers in Denver, Colorado went on strike after 15 months of attempted negotiations with the school district. The Denver Classroom Teachers Association, which represents the city’s 5000-plus teachers, is looking for higher salaries and changes to the districts bonus system, in which extra “merit pay” for teachers is calculated in a vague and inconsistent way.

On a wider level the Denver strike is an attempt to push back against the city’s recent policies of education privatization, which have all but engulfed the region. According to a 2017 report from Chalkbeat, there are 104 public schools in Denver and 117 charter and “innovation” schools. Innovation schools are operated by the district but they do not have to abide by all the rules that have been established in the teachers’ union contract. According to the National Education Association, Colorado teachers rank 46th in the nation in pay.

Hayley Breden is a high school social studies teacher and founding member of the Caucus of Today’s Teachers, a group made up of Denver Classroom Teachers Association members that promotes policies of social justice and anti-racism. She spoke with In These Times about the school privatization, the political climate and how other teacher work stoppages inspired this one.

Michael Arria: The primary disagreement between the union and the school district seems to be about how base pay is calculated. Can you explain how the current system is set up and what the teachers are fighting to change?

Hayley Breden: We are fighting for two main changes.  The first issue is for higher average salaries, especially for educators in the beginning of their careers. Our average salaries are not competitive with nearby school districts.  This contributes to Denver's teacher turnover rate of over 20 percent. Nextdoor district Jefferson County, with nearly the same number of students, has a turnover rate of 14 percent in 2017 to 2018.

Secondly, we are fighting for a reliable salary schedule so that Denver educators can easily understand and predict their salaries each year. The current system relies heavily on incentives for working in "high priority" schools [Title I schools] and bonuses for high test scores and test score growth. The main problem with the current system is that the thresholds which must be met each year in order to earn these bonuses are changed almost annually, as do schools' Title I statuses. As a result, some teachers earn the Title I incentive as well as two bonuses in one year, and then earn no incentives or bonuses the following year. This can be solved by providing educators with higher base pay district-wide, rather than relying on a system which essentially causes schools and teachers to compete for bonus money.

Michael: This actions comes on the heels of teachers’ strikes and work stoppages in West Virginia, Oklahoma, Kentucky and Arizona. Most recently teachers in Los Angeles went on strike. Can you speak to how these actions inspired Denver teachers and what you learned from some of their tactics?

Hayley: From all of these strikes and walkouts, we have been empowered by the meaningful change that has been created by these educators. While very inspiring, these events also brought more public attention and engagement to the issue of students' learning conditions and teachers' working conditions. Students, parents and community members are becoming engaged in a more proactive, urgent way in the face of increasing privatization and dismantling of our public schools here in Denver thanks to this new national movement for public schools.

From the teachers in Los Angeles, my colleagues in the Caucus of Today's Teachers [a progressive, social justice caucus within the Denver Classroom Teachers Association] have placed a renewed emphasis on the need for a democratically organized, member-driven union that is proactive in a variety of social justice issues, not just teacher pay.

Michael: Unlike other locations where strikes have taken place, officials have kept schools open and are using substitutes. Why do you believe they made that decision? Do you perceive it as a tactic that is being used to help break the strike?

Hayley: Many of the substitutes that were sent to Denver schools today were actually some of the many central office employees of Denver Public Schools. This is important to note because many of those employees support DCTA's [Denver Classrooms Teachers Association] side of the contract negotiations, and they were told they must serve as substitute teachers or else face "corrective action."

I think this tactic can be seen as a way to help families who face significant hardships when schools are closed, but it certainly does not help to build solidarity and teamwork among all DPS employees. Those of us on the picket lines understood and sympathized with our non-DCTA colleagues who had little choice but to cross the picket lines. Based on today's student reporting and local news coverage, the quality education during the strike that was promised by our superintendent did not occur.

Michael: Can you talk about some of the political opposition you've faced on this? I understand there was a Republican attempt to outlaw a strike before it happened.

Hayley: Last spring after the April statewide teacher walkout in Colorado, a legislator from outside of Denver [Rep. Paul Lundeen] introduced a bill that would have effectively banned teacher strikes. However, that quickly failed.

Much of the political opposition has been within the so-called liberal Denver community.  Much of the disagreement has to do with vastly different views on what it takes to build a truly equitable school system. Myself and my colleagues believe that bonus pay based on student test scores and incentives for teachers who work in Title I schools is just a band-aid and meaningless attempt to fix more systemic issues like gentrification, income inequality, and the need for a living wage for all people.

People who may identify as Democrats but also support the privatization of our schools have argued that extra pay for teachers in Title I schools is a way to make schools more equitable because putting more money into traditionally underserved communities is right. We disagree with that view because the teacher turnover rate in Title I schools is no different--and higher in some cases--than the district average. It's not a few hundred or even a couple thousand dollars that keeps teachers in their schools. The answer is a school system in which schools are not closed and opened every few years. The answer is building an economy that is sustainable for all Denver families.

Michael: Lastly, I am wondering what kind of response you've gotten from the community in response to the strike.

Hayley: While we did receive a few "thumbs down" and other negative gestures from drivers passing our picket lines today, the community support for better teacher compensation has been overwhelming and so empowering. At the most recent school board meeting a few weeks ago, there were three hours of public comment, all of which was completely supportive of Denver's teachers and students.  Students at several schools held walkouts today, joining their teachers on the picket lines in the fight for better teacher retention.

More by Hayley Breden in conversation with Michael Arria