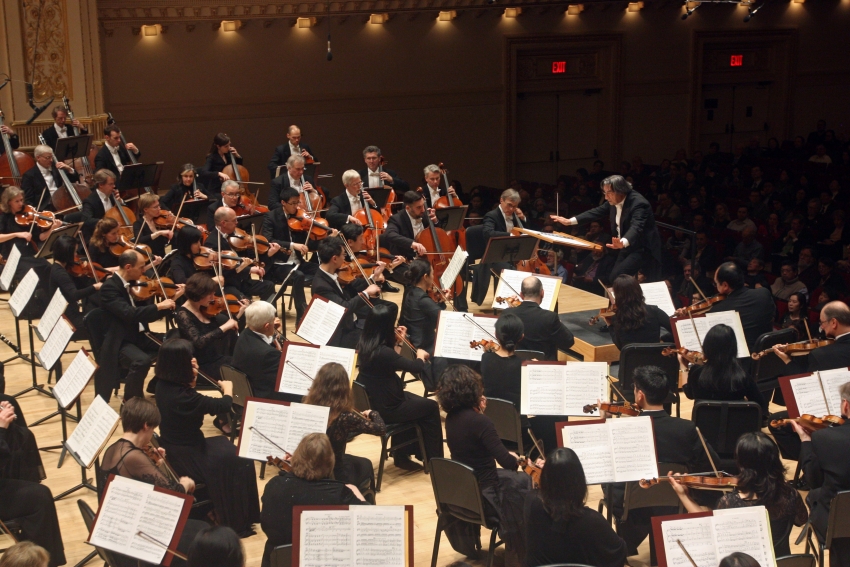 Over the course of their 7-week strike, the CSO played free concerts across Chicago. (Photo by Hiroyuki Ito/Getty Images)

While waving signs and walking a picket-line is standard practice for striking workers, performing world-class music isn’t. But for the Chicago Symphony Orchestra—one of the most renowned orchestras in the world—it was only natural to host free concerts during their longest strike ever.

“We—the Chicago Symphony—we are here to give this city music. We can’t exist without an audience. We want to keep giving back to the city, and playing concerts, and reaching different people,” Cynthia Yeh, principal percussionist and member of the musicians’ negotiating committee, told In These Times. “Playing concerts is what we all do.”

On May 6 at the Auditorium Theatre, where their first concerts were held 128 years ago, the CSO played their fifth and final free public concert of their series “From the Heart of the Orchestra,” after ending their seven-week strike by reaching an agreement with management on April 27.

“These concerts are our way of saying thank you to the people of Chicago—to all of you,” Steve Lester said while introducing the concert. Lester has played bass with the CSO for 41 years, and serves as the negotiating chair for the musicians. Support for the musicians effort has “really helped us through a very difficult time,” said Lester. “That support has reminded us of what we always knew—the Chicago Symphony Orchestra belongs to no one entity, it belongs to everyone. We are Chicago’s symphony.”

In an interview, Lester said that that the free public concerts were “key” to reaching an agreement, and contributed to public support for the musicians.

The strike, which began on March 11, saw musicians demanding higher wages and protections for their pensions, among other issues. Soon after, CSO musicians organized free shows in venues throughout Chicago—churches, high schools, music shops and union halls—playing in economically and culturally diverse neighborhoods. “The point that we make is that we belong to the city,” said Lester. “We belong to everyone in Chicago. We don’t belong to just one small group of people who are very wealthy. And that resonates well in a place like Chicago.”

Building support among the public and fellow workers can be critical for any successful labor struggle, including symphony musicians. With base salaries at $159,016 at the beginning of their strike, their pay was higher than many of the other workers who have gone out on strike in recent years. “It’s hard to have sympathy for someone who makes that salary,” said Peter Wahrhaftig, who plays tuba in the San Francisco Ballet Orchestra, and has played in the CSO. “It’s not like teachers, who are just scraping by. It’s a public relations challenge.”

Unlike workers in industries like manufacturing or food-service, orchestras are in the uncommon situation of being able to give away the fruits of their labor while they’re on strike by playing free concerts. “Is it a strike tactic? Probably so. Is it gratifying for the musicians? Incredibly so. And is it something that the audience enjoys hearing? Very much so,” said Wahrhaftig. “It’s a way of connecting the musicians to their audience as well, rather than just as an institution.” Wahrhaftig said that it’s common for orchestras to play free concerts while on strike.

Although CSO salaries are much higher than the median household income, symphony musicians are extremely specialized workers, and the job market is incredibly competitive. “To get a job in any orchestra now is an absolute crapshoot,” said Wahrhaftig. “Auditions are blind auditions. There’ll be anywhere between 50 and 150 people at any single audition. And some instruments, such as mine (the tuba), there might be one audition every two or three years, nationally."

Along with the competitiveness of symphony jobs, musicians point out the popularity and success of the CSO: the organization has won 62 Grammys, and last year the CSO played more concerts than any other orchestra in the United States. CSO music director, Riccardo Muti, is also critically acclaimed in the music world. “The Chicago Symphony, when Muti’s conducting, it’s really one of the extraordinary orchestras in the world. It really is,” said Wahrhaftig.

In press releases, the CSOA claimed that the orchestra was worried about the sustainability and future of the institution’s budget. CSOA President Jeff Alexander said in an interview with In These Times that in order to sustain the guaranteed direct-benefit plan, “we felt as though the financial structure of the institution would be in great jeopardy, and we didn’t want to see that happen.”

In the new agreement ratified April 27, current musicians maintain a guaranteed floor for their pensions, which the CSOA will provide, in case of unpredictable market factors, but new musicians joining the orchestra as of July 2020 will not be provided with a guaranteed-benefit plan.

Currently, there are plans for a study group to “study options for providing retirement security for musicians hired after the freeze of the DB plan,” according to the agreement, but Lester is worried that the study group may not be able to come to an agreement. “Believe me, that’s a concern,” said Lester.

“This has been such a difficult issue. I think, also, frankly, we’re looking to see that there are significant changes in the management and the board within the next year, so that by the time this has to be finally figured out, we may have more reasonable people to talk to,” said Lester.

The musicians also secured a salary increase bringing their base pay to $181,272, though they still lag behind their counterparts at peer symphonies in Los Angeles and San Francisco.

The study group is set to report its findings on retirement options for future hires by April 27, 2020, and as of now management and the musicians “disagree as to the interpretation of the study group clause, we are attempting to clarify it now,” Lester told In These Times.

While the agreement was a “compromise,” according to Lester, the CSO appears poised to stand together in future concerts. At the Auditorium Theatre, the CSO opened their concert with the Star Spangled Banner followed by Solidarity Forever, which was set to the tune of the Battle Hymn of The Republic, songs that Lester said were “suitable for this great occasion.”

“Let this concert represent a new beginning: that this cultural jewel will shine forever for the people of Chicago and the world,” said Lester.