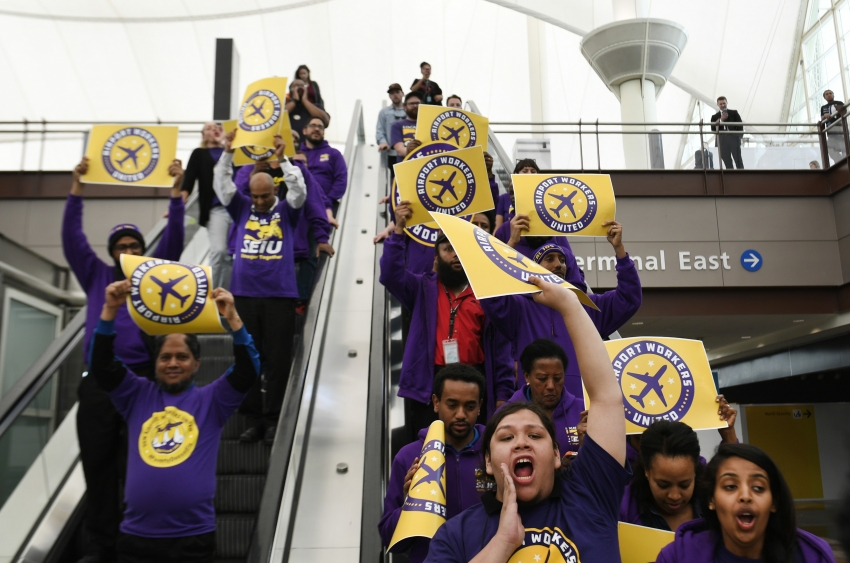 News coverage of the Green New Deal portrays organized labor as a major obstacle to its enactment. But our new report for Data for Progress paints a different picture. In a poll conducted for the think tank by YouGov Blue, union members overwhelmingly favored the proposed reforms, with 62 percent in support and 22 percent against. In a memo for Data Progress, where I am a legal fellow, I show how union contracts can be an effective way to fight for a Green New Deal.

In step with the rank-and-file, some union leaders have already backed the ambitious plan. In a resolution adopted in June by its executive board, the Service Employees International Union called the Green New Deal “an unprecedented opportunity to unite the fights for environmental, racial and economic justice.” Los Angeles County Federation of Labor secretary-treasurer Rusty Hicks said in March the “framework is vital to fighting” inequality and climate change. Association of Flight Attendants president Sara Nelson explained in April that it is “not the solutions to climate change that kills jobs,” but climate change itself. To be sure, a handful of union leaders, such as United Mine Workers of America president Cecil Roberts and International Brotherhood of Electrical Workers president Lonnie Stephenson, have come out against the proposal. Yet even Roberts has said that he and Green New Deal supporters “agree on 75 percent.”

American workplaces are a major source of greenhouse gas emissions, even in industries without a direct connection to the production of fossil fuels. Individual workers are relatively powerless to change a company’s carbon culture on their own, but through unions, workers can join together and put real pressure on employers to agree to binding commitments to combat a warming world.

Efforts to build climate protection goals directly into collective bargaining agreements are already being undertaken by labor unions in countries like Australia, Canada, and the United Kingdom. Work in a Warming World (W3), a Canadian research project linking academics and community partners to recenter the role of work in the fight against global warming, has undertaken an extensive project to document green clauses in union contracts across the globe. Their research provides a roadmap for American unions seeking to create sustainable workplaces.

For one, unions can bargain for the establishment of workplace environment committees that give workers real power to set sustainability benchmarks and to play an active role in implementation. In an agreement with a leading Canadian metals and mining company, the United Steelworkers Local 408 won contract language establishing a committee for workers and management to jointly develop programs aimed at preventing pollution, minimizing environmental impact and protecting employee health. The clause included an enforceable requirement that management furnish the union with all relevant data about the company’s environmental impact. Union involvement in designing sustainability initiatives can be particularly critical to ensuring there is real bite behind green programs that can otherwise be empty public relations ploys. When several American hotel chains rolled out a program that rewarded guests who forwent housekeeping services, it was hotel staff who spoke out about the pervasive problem of guests who “cheat a bit” while reaping the program’s perks.

Unions can also demand that employers commit to specific environmental goals directly in their contracts. Some activists have sought to get employers to agree to annual carbon footprint reductions, or to purchase union-approved carbon offsets if reductions cannot be achieved. Others have successfully bargained for building efficiency improvements and recycling programs. Seeking to reduce greenhouse gas emissions caused by transportation, some unions have even won telework provisions that give employees more flexibility to work from home. Where in-person work is required, unions have obtained employer support for employee transit programs that promote the use of public transportation, bikes and carpooling.

Bargaining green contracts will surely be most difficult in fossil fuel-linked industries, where the work itself contributes to the degradation of the climate. But union contracts have an important role to play in ensuring a just transition to a green economy. Employees worried about a Washington-negotiated Green New Deal can take control of planning for our climate change future at their own workplaces. To ensure that workers can compete for the growing number of green jobs, unions can bargain for employer-sponsored training programs that give employees an opportunity to learn new skills. They can also negotiate for robust severance pay and layoff benefit plans and even early retirement to ensure workers and their families are not left behind as transition nears. And while the National Labor Relations Act does not require employers to bargain with workers over entrepreneurial decisions about the firm, unions can push management to pursue green projects themselves, so that workers can stay on as the company itself shifts missions.

Each of these goals will be far easier to achieve with government intervention, which is why passing the Green New Deal is paramount. But we have no time to wait. American workers may not have a seat at the table in Washington, but unions can take advantage of their seat at the bargaining table now. If they negotiate green new deals at work, we can promote good jobs while averting a climate disaster.

Jared Odessky is a legal fellow at Data for Progress. He is also a law student at Harvard, a regular contributor to the blog OnLabor, and a former union organizer. His writing has been featured in The New York Times, Slate, and the Harvard Law and Policy Review.