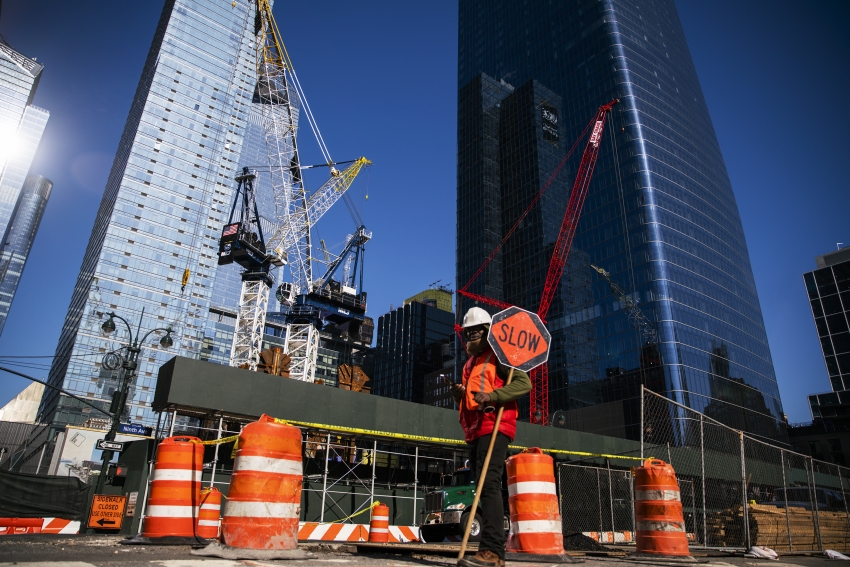 A Construction worker takes care of traffic as they build a new tower on March 26, 2020 in New York City. (Photo by Eduardo Munoz Alvarez/Getty Images)

With no firm national standards about shutting down construction projects as the coronavirus stalks the nation, building trade unions and their members are facing a grim multidimensional crisis: high unemployment, faltering pensions, lost benefits, plummeting dues revenue—and, for those who do remain on the job, the constant question of whether they should quit in order to protect their health.

Leaders at two major building trade unions this week described an increasingly desperate economic climate for their members. Eric Dean, the president of the 130,000-member Ironworkers Union, said that 30% of his work force was “idle or sitting at home,” and that unemployment continues to rise by the day. Jim Williams, vice president and organizing director at the International Union of Painters and Allied Trades, said that unemployment among his members has shot up to 50% in the course of a single week.

The price of this sudden economic dislocation is vast. In particular, health care benefits of the idled construction workers are now at risk, just when they need it most. Also at risk are the unions’ pension funds, which have cratered along with financial markets, endangering retirement benefits for thousands of members. The multi-employer pension fund of the Ironworkers, which was still recovering from the losses of the 2008 financial crisis, has now taken a 20% hit on its portfolio. “With our hours down and our investments down, a blind man can see that we’ve been severely impacted,” Dean said.

It is hard to know whether those construction workers who are still working should be considered lucky. In the coronavirus epicenter of New York, and in most other states, construction workers have been deemed “essential employees,” allowing their employers to keep them building on crowded job sites, where “social distancing” is next to impossible. Dean said that, for the first time in his career, he has seen construction projects building worker housing on job sites in order to keep workers isolated and close to their workplace. At the same time, ironworkers have told him that walking through empty streets in order to get to their still-active building sites “makes me feel that I’m expendable.”

“There’s a growing sentiment among our workforce that maybe [unemployment] should be higher, because of the health and safety risk of being on a construction site,” Jim Williams said. Among IUPAT members, there is a split down the middle between those who are more concerned about health risks, and those who say “I need to work so that I have my health care coverage, so that I can continue my way of life. It’s a Catch-22.” Though the union can see why work on critical infrastructure like the electrical and water systems must continue, commercial construction “can certainly slow down,” he said. “I don’t believe building a millionaire’s or billionaire’s condominium” is worth the risk.

The stimulus bill now working its way through Congress is only a half measure, as far as the unions are concerned. A coalition of building trade unions lobbied for four “planks” to be included in the bill: better unemployment compensation, healthcare coverage that won’t lapse, shoring up pension funds, and a large investment in national infrastructure—a policy that Democrats and Republicans have been talking about for years without ever making it a reality. Of those four goals, only the unemployment compensation aspect will be fulfilled in the current bill. Already, the building trades are pushing for another stimulus bill after this one is completed. “This was the relief bill,” Williams said. “There’s going to have to be a recovery bill, too.”

Besides the direct impacts to members, the unions themselves are now staring down the second-order consequence of widespread unemployment: a dropoff in union dues. IUPAT has already told its locals that it is waiving member dues for the month of April as a relief measure, and will assess again after that. Waiving dues, however, inevitably eats away at the revenue unions use to maintain their staffing—and to lobby Congress for whatever comes next. According to Dean, the Ironworkers lost around 15% of their members after the 2008 recession, a figure they are using as a baseline now. But everyone acknowledges that this time could be worse. And Dean suspects that if work dries up, more members closing in on retirement age may decide to go ahead and retire early, further weakening the active membership numbers.

If there is any silver lining, it is that whenever the industry picks back up again, non-union construction workers may feel more enticed to organize, after witnessing their higher-paid union colleagues make use of at least a marginal safety net during this crisis. “It presents the opportunity for the labor movement to get it right,” said Williams. “Any time we miss that, we miss a golden opportunity.”