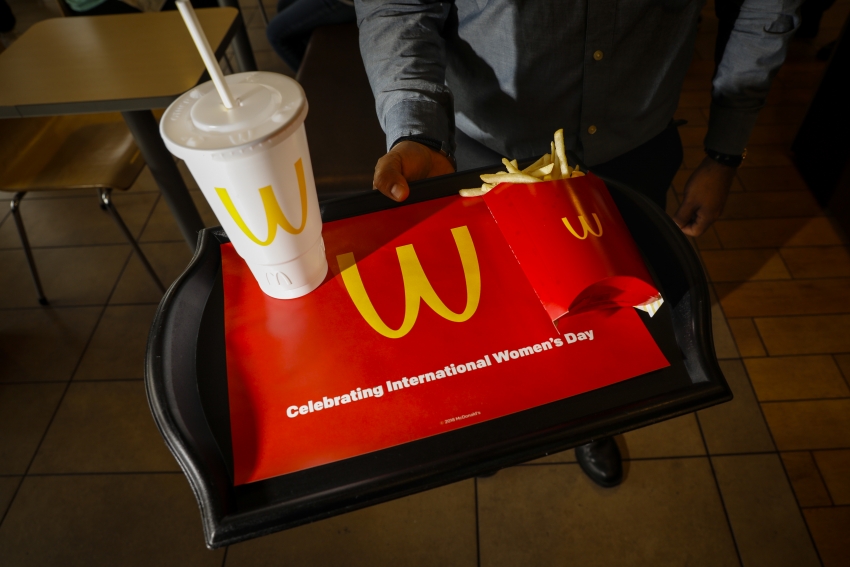 McDonald's has long held that it is not responsible for violations that take place in stores owned by franchisees. (Jay L. Clendenin/Los Angeles Times via Getty Images)

Two women who worked for McDonald’s in Florida, backed by the Fight For 15 and the Time’s Up legal fund, have filed a new class action lawsuit against the company, alleging a widespread pattern of sexual harassment at stores throughout the state. They are seeking $500 million in damages, and a fundamental change in the way McDonald’s handles sexual harassment at thousands of locations across America.

The suit is crafted to attack a legal shield that McDonald’s uses to insulate itself from labor violations. The company, like many in the fast food industry, has long held that it is not responsible for violations that take place in stores owned by franchisees—a powerful tool for protecting the corporation, since more than nine in ten McDonald’s are franchises. (The legal definition of this “joint employer” standard has been a key struggle for the Fight For 15, which saw a more labor-friendly definition during the Obama administration rolled back under President Trump.) Lawyers in this suit are targeting more than 100 McDonald’s stores in Florida directly owned by the parent company, seeking to force changes that could then spread to corporate and franchise-owned stores alike. The new lawsuit is an escalation of a campaign against sexual harassment at McDonald’s that the Fight For 15 has been waging since 2018, which has included dozens of complaints filed with the Equal Employment Opportunity Commission.

On top of the half-billion dollars in damages, the suit asks for additional punitive damages, as well as “effective worker-centered anti-harassment policies and procedures and training” for both lower and upper-level McDonald’s managers.

The two plaintiffs in the suit, Jamelia Fairley and Ashley Reddick, both worked at a corporate-owned McDonald’s in Sanford, Florida. Both say they suffered sexual harassment from coworkers and employees alike over a period of several years, and that their complaints were ignored by managers. Fairley, speaking via videoconference, said that one coworker asked her “how much it would cost to have sex with my daughter,” when her daughter was one year old. She said that her hours were cut after she complained. “Try raising a toddler on a paycheck of $67 a week,” Fairley said, as her daughter could be heard crying in the background.

Reddick, who was earning just over $10 an hour, says that a male coworker harassed her verbally, rubbed his groin against her, showed her a picture of his penis on his cell phone, and even followed her into the bathroom at the store while she was cleaning it, terrifying her. She says that managers retaliated against her when she complained. “Instead of helping me, they stopped scheduling me for shifts,” she said. “And then they fired me.”

Gillian Thomas, an attorney at the American Civil Liberties Union who is working on the plaintiffs’ case, said that while the lawsuit’s formal scope extends only to corporate-owned stores in Florida, the hope is that it can have a broader effect on sexual harassment throughout the entire company. “McDonald’s has the power to change practices everywhere,” Thomas said. “Our position is it should be doing vastly more to ensure that the employees in those franchises that earn billions of dollars for the corporation” are protected.

That position is of a piece with what the Fight For 15 has long maintained: McDonald’s, in reality, exercises tight control over all aspects of its franchises, from the food to the menu to the store appearance, so the argument that it is not responsible for labor violations because it does not control the operations of its franchisees is little more than a convenient legal fiction.

In a statement, McDonald’s said that “The plaintiffs’ allegations of harassment and retaliation were investigated as soon as they were brought to our attention, and we will likewise investigate the new allegations that they have raised in their complaint.” The company also said it has implemented “Safe and Respectful Workplace Training in 100% of our corporate-owned restaurants and encourages our franchisees to do the same.” (The fact that the company purports to be unable to impose training requirements on its franchised stores points to the very “joint employer” problem that the Fight For 15 is up against.)

Allynn Umel, an organizing director with Fight For 15, said that McDonald’s failure to effectively police sexual harassment has the same root cause as the complaints workers have had about their own safety while working during the coronavirus outbreak—complaints that have sparked walkouts across the country in recent weeks. “They have failed absolutely,” Umel said, “in being able to protect their own workers.”