Trump Admin Furloughed 4,000 Korean Workers In the Midst of a Pandemic To Punish South Korea 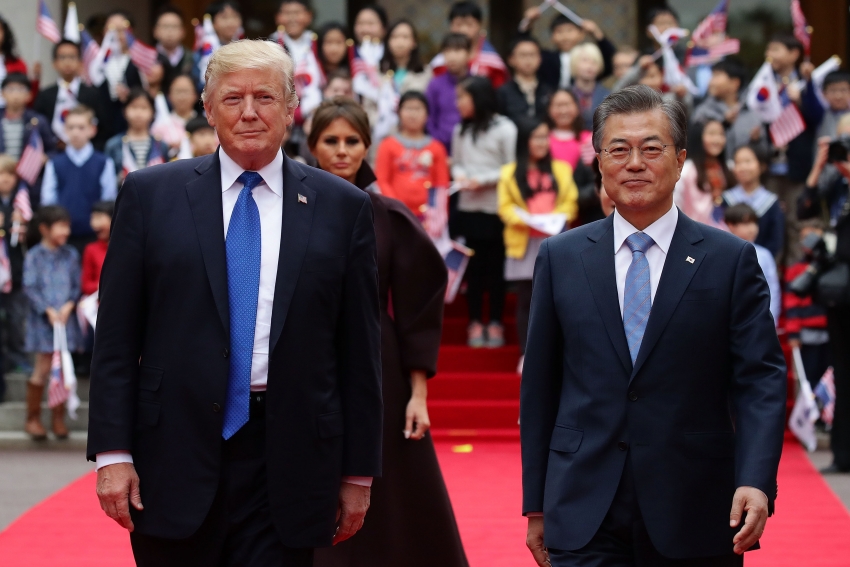 The U.S. Forces in Korea (USFK) has furloughed about half of its 8,500 local hires, not for fear of the COVID 19 pandemic, but in a ploy to extract more subsidies from the South Korean government, using workers as pawns.

As of April 1, about 4,000 Korean employees were put on unpaid leave until further notice after the U.S. and South Korean governments failed to renew a cost-sharing deal that expired December 31. “This is an unfortunate day for us,” USFK commander, Gen. Robert B. Abrams, said on April 1, commenting on the unprecedented massive furlough. “It’s heartbreaking.”

In a sarcastic tweet he sent some hours later, however, the four-star army general betrayed his sympathetically toned remarks. “I learned today that,” Gen. Abrams said, “’Don’t count your chickens before they hatch’ = ‘Don’t eat your kimchi stew before the time is right.’” He dashed any hope for a quick end to the furlough, dismissing local press reports that the two governments were a few days away from reaching a new deal.

The initial stages of negotiations for the renewal of a cost-sharing deal, known as the Special Measures Agreement (SMA), were bound to fail, as the Trump administration demanded of the South Korean government about $5 billion a year, more than a five-fold increase from about $853 million of the previous agreement. The Trump administration rejected a 13% increase offered by the South Korean government.

However, the mass furloughs could have been avoided had the United States not rejected an offer by South Korea to cover local hires’ wages during the runup to a new deal.

As of press time, half the usual level of South Korean staff clean and maintain at least 17 U.S. military bases for 25,800 troops stationed in the country.

On the campaign trail, Trump routinely attacked South Korea, one of Asia’s new economic powerhouses, for shrewdly passing military costs on to the United States. In January 2016, he slammed South Korea, saying, “South Korea is a money machine. They pay us peanuts.” He went on to declare, “South Korea should pay us and pay us very substantially for protecting them”

However, South Koreans have been paying for the U.S. military presence on their own soil since 1953, when U.S. bases and camps began to dot their war-torn country to house more than 100,000 troops, after the Korean War of 1950 to 1953, a civil war that grew into a war by proxy between the Cold War superpowers.

While public data are still scant, there were three big bumps in South Korean contributions during the Cold War, between the 1950s and the early 1990s, when the country emerged as the U.S. government’s bulwark against communist bloc. In 1966, the United States and South Korean entered into the Status of Forces Agreement (SOFA), under which South Korea would pay for the land and facility use by the USFK.

In 1979 when the Carter administration stepped up pressure on South Korea, still a poor country with a per-capita GNI of $1,670, to increase military spending and financial support for the USFK, U.S. ambassador William Gleysteen and USFK commander John Wickham jointly warned Washington of “one of the most serious misperceptions” about U.S. policy toward Korea: “The U.S. finances a significant portion of Korean defense.” They argued that South Korea’s support largely exceeded that of more prominent allies with a U.S. military presence. Gleysteen and Wickham recommended gradual pressure. Any immediate, substantial rise in host-country support, they warned, would result in the postponement of South Korea’s infrastructure expenditures or even the downgrading of its credit ratings.

In 1991, the two countries signed the SMA, replacing much of the SOFA and further strengthening South Korea’s financial contributions to the USFK. In the three decades since 1991, South Korea’s payouts rose by 10 times, despite the post-Cold War reality that the USFK, once committed almost exclusively to the Korean peninsula, were increasingly becoming something of a rapid response force for the entire region.

The 28,500-strong USFK represents the U.S. military’s third-largest overseas presence. Nothing showcases South Korea’s financial burden better than Camp Humphreys, about 40 miles southwest of Seoul, and the largest U.S. military base outside the United States. The base, which can accommodate up to 45,000 personnel from all military branches, was completed in 2017, with the rise of China as military superpower in mind. Camp Humphreys, about 250 miles away from China’s eastern seaboard, is the most forefront of about 400 U.S. military bases encircling China. While neither government discloses dollar figures, several press reports said South Korea paid more than $9 billion out of a total of $10.8 billion for the construction.

The 4,000 USFK Korean employees were held financially hostage as the country grappled with the economic and social fallout of the coronavirus pandemic. Categorized as freelancers under contract with a foreign entity, these workers are not entitled to furlough benefits. Their employment status and conditions are governed under a vagely SOFA that does not delineate labor rights or employment status.

USFK local hires are in a legal limbo that falls between U.S. and Korean jurisdiction. The workers are left with little legal recourse in the face of layoffs or wage freezes. Between 2017 and 2019, the USFK shed 400 to 500 Korean hires despite continued rises in South Korean subsidies. During the Great Recession in 2018, the command refused to approve a mediation deal by South Korea’s labor relations commission over a three-year wage freeze. All of these issues should now be settled under SOFA structure. Under the SOFA, both parties must agree to even discuss an issue, and to date, the U.S. has refused to initiate discussion about these labor concerns. The SOFA bans workers from taking collective action such as stoppages over a pending settlement.

“Amid the COVID 19 pandemic, it is even difficult find interim part-time jobs,” said the USFK Korean Employees Union in a statement. “Our livelihood will be hit directly.”

Unionists mount daily pickets at Camp Humphreys while the government considers a one-time loan program for the workers. As one community activist told the press, “This amounts to daylight robbery.”

Kap Seol is a writer based in New York.