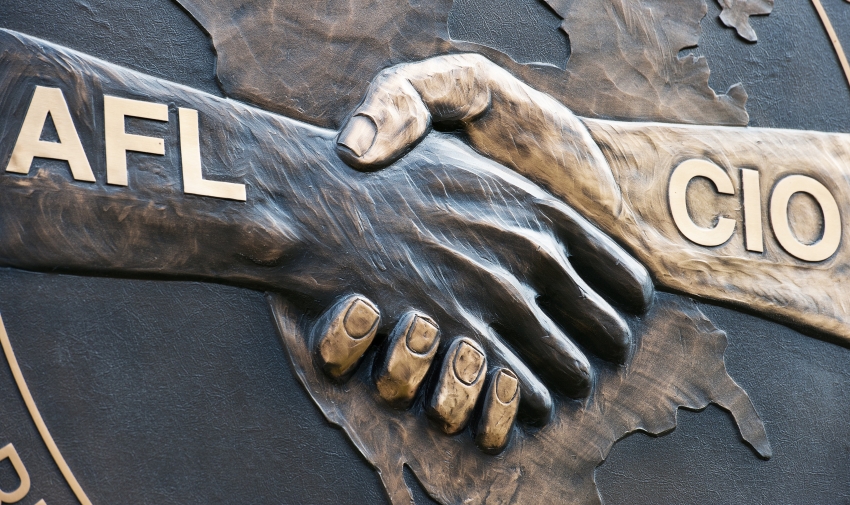 A close-up image is seen of the AFL-CIO Union Logo that hangs on the headquarters building September 29, 2011, in Washington, DC. (PAUL J. RICHARDS/AFP via Getty Images)

Today, the Writers Guild of America, East announced a formal resolution calling on the AFL-CIO to disaffiliate from the International Union of Police Associations, the labor union’s police union member. The WGAE is the first union that is actually a member of the AFL-CIO to take this position. The calls to separate the labor movement from police unions are now coming from inside the house of labor.

I’m one of the 21 elected council members of the WGAE who voted on this resolution. As a policy, I can’t go into the specifics of the internal deliberations around the resolution; I certainly can’t take any individual credit for it, because this was a vast collaborative process that was driven in large part by the sentiment of many of the union’s members; nor, ironically, can I write a news story about it, since I am conflicted as a participant. I cannot speak on behalf of anyone but myself. What I can do is to say something about why I think the issue is important, and how you can take this issue up inside your own union, no matter which one it is.

That said, like all institutions run by humans, unions can be abused and overtaken by the bad parts of human nature. Some unions are lazy, and some unions are self-serving, and some unions are misguided or myopic or incompetent. But no unions in America have been actively malignant in the way that police unions have. They are largely responsible for the fact that it is so difficult to remove and prosecute bad cops. They endanger the public. Many police unions are also run by racists, and have been for a long time. There is no better sign of how bad police unions have become than the fact that the loudest calls to rein in their power are coming from inside the labor movement—from people who usually spend their time fighting against efforts to rein in unions.

Since the beginning of the ongoing uprising, the issue of police unions inside the AFL-CIO has found a new urgency. (Kim Kelly, who is also a WGAE council member, wrote a good story on the topic a week ago.) Those of us who want the labor movement to be fighting for the same thing that the people in the streets are fighting for have had to abruptly face the fact that the biggest union coalition in America has as a member a union of more than 100,000 cops. They are the same cops who are beating, tear-gassing, and otherwise oppressing all of the other working people who are right now out in the streets asking to be free of that oppression, including multiple journalists and WGAE members who have been unjustly arrested covering protests.

The AFL-CIO is a coalition of 55 unions, representing 12.5 million members. Its constitution says that it exists “to fulfill the yearning of the human spirit for liberty, justice and community; to advance individual and associational freedom; to vanquish oppression, privation and cruelty in all their forms.” Reality has made clear that police unions do not share those goals. It is absurd to pretend that a single coalition can effectively represent the interests of both the protesters getting hit with clubs, and the police officers who are clubbing them. The question is not whether police unions should exist at all, or whether you think all police officers are evil people—rather, the question is whether the presence of police unions inside the strongest union coalition in America is hurting the labor movement and its ability to help working people achieve justice. And the answer is yes.

The AFL-CIO includes a process for kicking out affiliate unions, if “the policies or ­activities of any affiliate are consistently directed ­toward the achievement of the program or purposes of authoritarianism, totalitarianism, terrorism and other forces that suppress individual liberties and freedom of association and oppose the basic principles of free and democratic trade unionism.” It is hard to conjure a convincing argument that police unions in America do not meet that standard. The WGAE’s resolution asks the executive council of the coalition to begin the process of investigating the IUPA according to that standard. It also urges other unions inside of the AFL-CIO that represent police officers to consider whether having those members is harmful to the goals of our labor movement as a whole.

What about the potential for progressive reform of police unions? Great. Do it. When the police unions have been reformed, we can have this conversation again. Until then, all we have to go on is reality.

In the context of AFL-CIO unions, the Writers Guild, East is small. We have fewer than 7,000 members, mostly screenwriters and journalists. What we do have is a seat at the table, and a voice. We pay our dues to the AFL-CIO. We believe in the vision of a stronger labor movement. We are one of the most successful organizing unions in the country on a percentage basis. We know that for unions to survive, we must recruit millions of new members into the flagging labor movement. Those union members of the future will be the same people who are in the streets right now. We have to show them that they’re welcome. We have to be on the right side of history.

Our resolution is a small first step. What would truly push the AFL-CIO to act would be similar resolutions coming forth from many other member unions. Grassroots organizing on that front has already begun. But big unions are bureaucratic institutions, and the clamor for them to change needs to be very, very loud. If you are one of the 12.5 million members of the AFL-CIO, you can do what we did. Many of you have already been marching for justice this week. Take that same energy and make your union join this fight.

The point of the labor movement is to lift each other up. If your job is to body slam us, you shouldn’t be here.