The Most Radical Union in the U.S. Is Shutting Down the Ports on Juneteenth 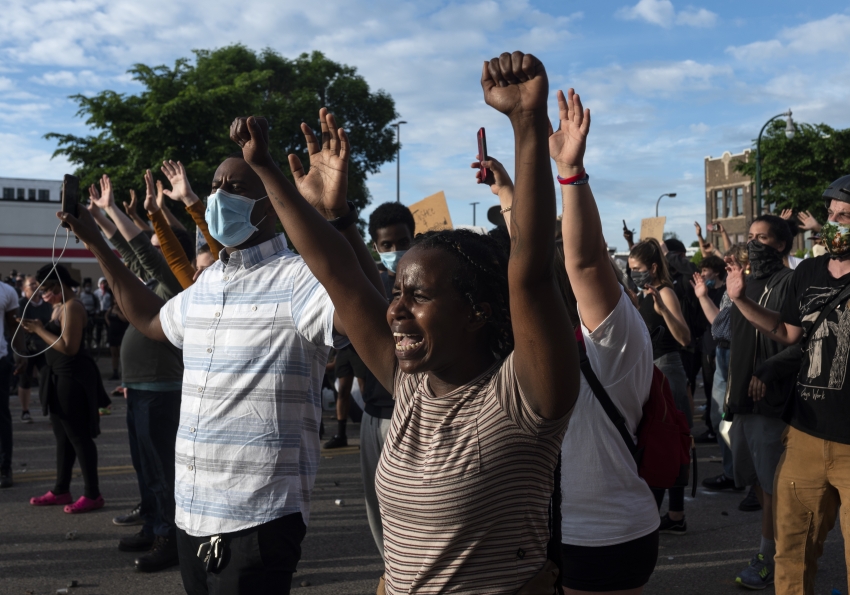 Protesters confront police outside the 3rd Police Precinct on May 27, 2020 in Minneapolis, Minnesota. (Photo by Stephen Maturen/Getty Images)

Outrage over the police murder of George Floyd launched Black Lives Matter protests across the country and world. Most actions are being organized by young black people. While many are working-class and at least some are anti-capitalist, few protests are formally part of the labor movement.

That may change this Friday when the most radical union in the United States shuts down the country’s gateway to the world, West Coast ports, in solidarity with Black Lives Matter on the day commemorating the end of slavery. As Clarence Thomas, a long-time dockworker activist for black equality and socialism, noted recently, “It will be the first time that an international union has ever taken off from work for the purpose of commemorating Juneteenth.”

Thomas, an African American from Oakland, is a proud, third-generation member of the International Longshore and Warehouse Union (ILWU). Arguably, no union has fought longer and harder for black equality. As Willie Adams, the union’s first black International President, recently declared: “Our union has a long history of confronting racism on the job, in our communities and around the world.”

By contrast, most unions—hypothetically, the collective voice of working people—seem hesitant to take action. While perhaps by mistake, the trashing of the AFL-CIO headquarters, located near the White House, exemplified the yawning divide separating black and youth protesters and “organized labor.” Yet, consider that the AFL-CIO, however weak it may seem, still represents 12,500,000 workers. There is no larger movement of ordinary people than unions. Despite their potential, unions are issuing nicely worded statements but providing little tangible support to the current protests, the largest working-class uprising in two generations.

Some unions, such as the Chicago Teachers Union (CTU) and United Electrical, Radio and Machine Workers of America (UE) are actively challenging racism, police brutality, and other reactionary policies with progressive, forward-thinking actions. Such militancy and radicalism, not coincidentally, have emerged in unions with larger numbers of black and brown, immigrant, and female members. Still, the ILWU’s Juneteenth action raises the bar for what worker solidarity with Black Lives Matter looks like.

The breadth and depth of this union’s radical commitment to equality may shock those who stereotype unions as liberal or even conservative. Harry Bridges, the ILWU’s first and long-time president, once declared in the 1940s, “If things reached a point where only two men were left on the waterfront, if he had anything to say about it, one would be a black man.” Himself an Australian immigrant and anti-capitalist, Bridges made this claim when this union was more than 90% white.

Zack Pattin, a white, rank-and-file activist in ILWU Local 23 (Tacoma), proudly recounted to this writer some of his union’s history: “We pass down stories about integrating the waterfront and our union in the 30s and 40s, opposition to Japanese internment, Harry’s deportation trials and the fight for immigrant rights, support for Dr. King and the civil rights movement, support for Cesar Chavez and the Delano Grape Strike, refusing to handle South African cargo to protest Apartheid, and resistance to the wars in Iraq and Afghanistan.”

ILWU members also understand the role of police in undermining social movements. Pattin made this connection by highlighting the Big Strike of 1934, out of which his union was born. “It’s not lost to us that the formative moment in our history—Bloody Thursday—was a police murder [of two strikers] right outside the San Francisco union hall on July 5, 1934,” he said.

That’s why Jack Heyman, a veteran Local 10 activist and white anti-racist, recently told The Nation, “if you look at ILWU locals’ bylaws, many of them explicitly ban police from membership. That’s because the police have been always been used as tools in the fight against the working people.”

Local 10, the only black-majority longshore branch, and its companion Local 34, have led the way in condemning racist, police brutality. In 2010, the unions shut down the Port of Oakland after local law enforcement killed Oscar Grant. They did so again on May Day, in 2015, to protest the police murder of Walter Scott, an unarmed black man in South Carolina.

After George Floyd’s murder, the country’s leading social justice union once more is playing a major role. Last Tuesday, the ILWU downed tools for nine minutes during Floyd’s funeral. This Friday, Juneteenth, the ILWU will shut down all twenty-nine ports it controls—from San Diego to Bellingham, Washington—for the entire, eight-hour day shift.

Dockworkers intend to use their labor power to send a message. As Local 10 President Trent Willis, an African American, declared at an SEIU-led protest in Berkeley on June 13, “We’re sending a clear statement to the powers that be, our government. We’re sending a clear statement to these corporate bosses that we intend to use our labor, put our labor where our mouth is. We intend to take economic action if our demands are not met.” Willis was referring to the demand to end racist policing.

When taking this political stand, dockworkers appreciate that their strategic locations at hubs of global transport give them tremendous power. The Pacific Maritime Association, which represents shipping corporations, explained in a June 8 statement why that matters: “West Coast ports handle a majority of the maritime cargo that helps fuel the U.S. economy, brings vital goods and medical supplies to local communities, and supports millions of American jobs.” Clarence Thomas put it succinctly: “Longshore workers probably understand capitalism better than anyone else…If the cargo doesn’t come off the ship, that’s merchandise not sold. Stopping work…is not a symbol; it’s an act that demonstrates the leverage of the working class.”

Willis, Thomas, Gabriel Prawl (of Local 52, Seattle), Keith Shanklin (Local 34 president) and others organized this Juneteenth stop-work prior to Trump’s provocation to speak that day, in Tulsa of all places. An ILWU press release explains this day’s significance, past and present: “Juneteenth commemorates the end of slavery in the United States. On this date in 1865, Black Slaves in Texas were told of their emancipation from slavery two years after the Emancipation Proclamation became effective…our nation has made progress but the changes necessary to end systemic racism have come slowly or not at all, as the murder of Mr. Floyd on May 25, 2020 demonstrated.”

Peter Cole is a Professor of History at Western Illinois University and Research Associate in the Society, Work and Development Program at the University of the Witwatersrand in Johannesburg, South Africa. He is the author of Wobblies on the Waterfront: Interracial Unionism in Progressive Era Philadelphia and the award-winning Dockworker Power: Race and Activism in Durban and the San Francisco Bay Area. He also is the founder and co-director of the Chicago Race Riot of 1919 Commemoration Project (CRR19). He tweets from @ProfPeterCole.