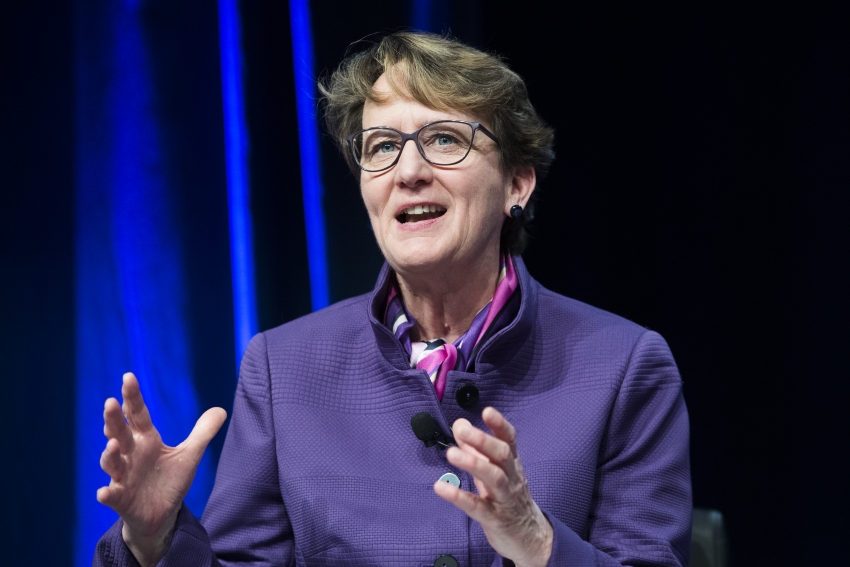 What exactly will the SEIU’s statement mean in practice? And where does the union stand on the question of whether police even belong in the labor movement? We spoke to SEIU President Mary Kay Henry to find out.

In These Times: The SEIU’s resolution in support of the Movement For Black Lives says in part that “We must divest from and demilitarize the police.” What do you see as your role in accomplishing that?

Mary Kay Henry: It’s different in different cities. Our international executive board leadership has put this into practice actually before we passed the resolution. It was the work that was happening in cities all across the country that brought the resolution to life. We had leaders at a table in Los Angeles thinking about how to shrink the police budget and reinvest in services—in mental health, substance abuse, and job training, targeted specifically at the black community in L.A. In Seattle, our three locals that represent members who are being overpoliced, and also are part of the mobilization and disruption in Seattle, are in a multiple stakeholder conversation about how to transform policing and criminal justice. In Minneapolis, our locals pushed through, behind the Movement for Black Lives, the Minneapolis School Board’s vote to eliminate police from the schools, which our members had been pushing for for four years. Our locals are involved in holding the police union accountable there, as they were in Seattle. In New York, our locals have been very aggressive for years in ending stop and frisk. We directly engage on behalf of our members in these communities. Those are just a few examples.

Likewise, on the public safety side of law enforcement, we’ve done one-on-one conversations about the implications of this resolution for all of our public safety workers. There’s public safety workers in a lot of our city and state units that do probation, juvenile detention, that area of criminal justice. And then we have a few police units as well, that we’re in direct conversation with about, “How do we come together, acknowledge that this is a system problem, and that the anti-black structural racism has to be rooted out?” Not just in criminal justice, but in education and health care. The whole thing. But we see this as an incredibly powerful organizing moment on the question of race as it relates to criminal justice, and that’s why our union thought it was so important to take this action, and to unequivocally back the Movement for Black Lives, and have an internal struggle over what that word “divestment” means. As you know, that word has caused the most tension.

In These Times: To drill down on the one-on-one conversations you’ve been having with your police and public safety locals: Is there going to be some set of enforceable standards for those locals to comply with that will come out of this?

Mary Kay Henry: The one-on-ones are to listen: What are the issues, what are you hearing from your members, can we get to a group meeting? And then I’m establishing a national leadership group that will meet next week to begin to set those standards. Because we think the standards are embedded in our resolution, and we just need to lift the standards out of the resolution, and then engage directly with law enforcement about, do we have agreement that there’s a system problem here? Do we all have agreement that we’re gonna fight for racial justice, and to end violence towards Black Americans in this country? And then, what are we gonna do—how are we going to do that, together? That process has actually been going on for three years inside our corrections council. Because of our racial justice task force from the 2016 convention, they established a stakeholder table where they brought formerly incarcerated people, family members of the incarcerated, current corrections officers, retired corrections officers, and then employers from states into a stakeholder process where they’re trying to reimagine corrections in the United States.

I’d like to replicate that same process with police. But I think you know the pace of change is so rapid. We are trying to act with the urgency—we would normally take three months to deliberate on a resolution like this. We took a week. Just to give you a sense of the pace of change.

In These Times: Is it possible that the outcome of this process would be you separating SEIU from those police and public safety members?

Mary Kay Henry: We’re trying to co-create with our leaders a range of options. I would prefer to have that conversation directly internally before I’m talking to the national press about the actions. We can update you about that probably within two weeks.

In These Times: To put you on the spot in a different way, do you have any thoughts on some of the recent calls from inside the labor movement for the AFL-CIO to expel the International Union of Police Associations?

Mary Kay Henry: I think that the labor movement needs to be a vehicle for transformation in every aspect of our lives, and that we need to function as an anti-racist organization. So given that principle, I think it’s critical that we have tough conversations and we engage on the hard issues, and that if we can’t get that to occur, I understand that expulsion is an option that has to be considered. Because there’s a question that we talked about inside SEIU: This is a “which side are you on?” moment. So while the labor movement is a vehicle that brings together all kinds of workers from all walks of life—which is what I think makes us such a powerful vehicle for change in the nation—we also have to not tolerate racism in our ranks. The way we are choosing to do it is by going into hyperdrive with a member education program that we launched the same day that we moved the resolution. I didn’t want the resolution to be a piece of paper, I wanted it to be a set of commitments that we’re holding ourselves to at every level of leadership in the union.