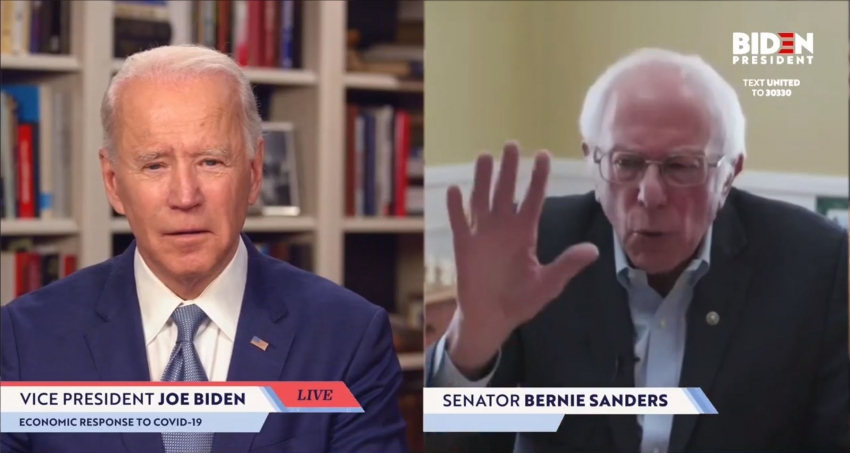 Yesterday’s release of the recommendations of the “Unity Task Force” made up of delegates from both the Bernie Sanders and Joe Biden camps marked an unprecedented attempt to formally unite the centrist and progressive wings of the Democratic Party. But it also crystallized the depth of their ideological disagreement, including within the world of organized labor.

The task force, made up of 49 surrogates from both Sanders and Biden, produced a report of more than 100 pages, intended to influence both the Democratic Party’s platform and Biden’s own policy priorities. The eight members of the economy section of the task force included two labor leaders: Lee Saunders, head of the 1.6 million-member public sector union AFSCME, a Biden delegate; and Sara Nelson, head of the Association of Flight Attendants, a Sanders delegate. Their experiences crafting the labor policy recommendations are a microcosm of the larger divide between the more establishment and radical wings of American unions.

The task force’s labor and worker rights platform includes several items that are standard on most unions’ political wish list: a repeal of “right to work” laws that make it more difficult to organize; “card check” recognition that makes it easier to put new unions in place; a ban on anti-union “captive audience meetings” and harsher penalties for employers that violate labor laws; and passage of the PRO Act, a strong pro-labor bill that passed the House earlier this year.

More remarkable is the fact that Lee Saunders, one of America’s most powerful public sector union leaders and an Obama confidante, represents the faction that was not seeking to give his own members the right to strike. “In the public sector, AFSCME has taken the position that… in order to come to a conclusion if there are difficult negotiations, we should have binding arbitration in place of the right to strike,” Saunders told In These Times. “Public sector unions believe binding arbitration is better because we provide valuable public services.”

Saunders acknowledged that the issue of the public sector’s right to strike was discussed in the task force’s negotiations, but his view, unsurprisingly, carried the day. Sara Nelson, a leftist in the labor movement who is often mentioned as a future candidate to lead the AFL-CIO, pushed unsuccessfully for public workers to have the same right to strike as their counterparts in the private sector. “My mind wasn't changed during this process on any issue we brought forward. I fundamentally believe in the right to strike. The strike is a necessary component of collective bargaining,” she told In These Times. “If federal workers had the right to strike, there would never be a government shutdown ever again.”

There is no question that the function of the task force was to pull Biden to the left. It was meant to function as a consolation prize for the Sanders wing of the party—which, to be fair, is more than most losing primary candidates get. How successful it was in that task is a matter of perspective. Saunders emphasizes the unity aspect of the process, and believes that its platform should help all of organized labor feel satisfied that Biden is a candidate who will genuinely pursue their agenda. “The importance of unions was front and center throughout the entire discussions,” he said. “He understands the importance of workers… it will be a priority for him, I’m convinced of that.”

For Nelson, the benefits of the task force are more nuanced. She noted significant policy wins, like a $15 per hour minimum wage and union neutrality requirement for all federal contractors. More broadly, she says, implementation of the entire platform would revolutionize American labor law for the better. On a practical level, she thinks that the personal relationships forged between members of the task force will help open doors for more left wing policy experts in a Biden administration. But she acknowledged that progressives did not get everything they wanted in the platform, pointing in particular to the lack of a jobs guarantee.

“What’s missing is the approach to the economy that all work is essential, and that it is cruel and dishonest that we would center it around the idea that a certain percentage of people who want to work should remain unemployed to stave off inflation. That’s absurd,” she said. “That approach undermines labor’s place at the table, and labor’s place in our democracy.”

Just as it lacked a jobs guarantee, the task force’s recommendations did not include Medicare for All or the Green New Deal. These omissions were probably inevitable, given the fact that Biden and not Sanders is the nominee. The left wing of the labor movement can take heart in the existence of the task force, and in some moderate wins at the negotiating table. Its outcome, however, is also proof that progress towards radical reforms is made outside, not inside, of the rooms where the power players huddle.