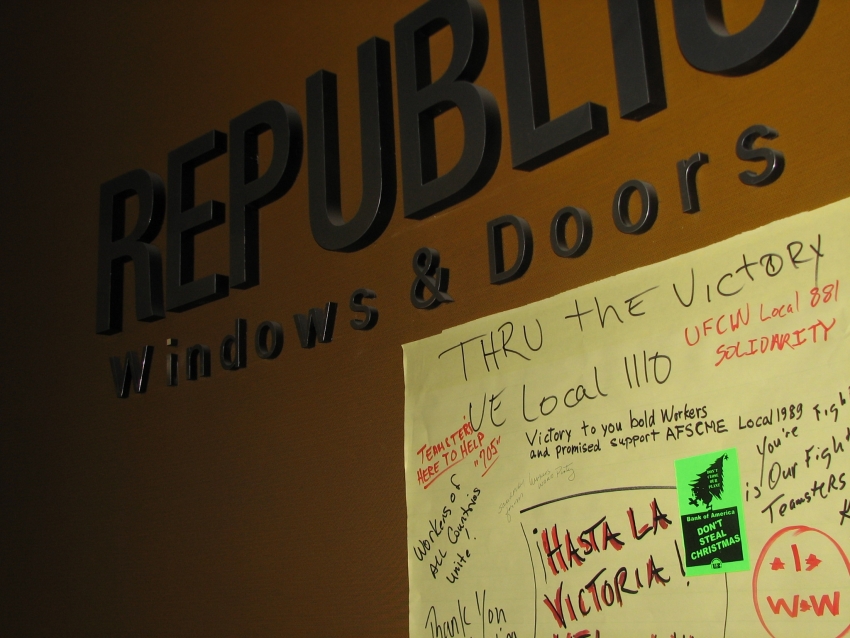 Workers from the former Republic Windows and Doors factory hope weatherization incentives will help them get their jobs back.   (Photo by Kari Lydersen.)

The phrase “green jobs” has been thrown out right and left recently, with everything from urban farming to building wind turbines and solar panels to producing plain old insulation described as a “green job.”

When the California company Serious Materials bought the former Republic Windows and Doors factory on Chicago’s Goose Island this spring, inspired by the Republic workers’ six-day factory occupation in December, company officials and national politicians—including President Obama and Vice President Biden—held up the operation as a poster child of “green jobs” and the American Recovery and Reinvestment Act (ARRA), or stimulus, at work.

The idea was that stimulus funds for weatherization would exponentially increase demand for Serious Materials’ energy-efficient windows and ecological drywall.

The concept certainly makes sense. But the relatively slow ramp-up of production at the Serious Materials Goose Island plant shows how “green jobs” and, more generally, jobs created by the stimulus, don’t materialize as quickly and easily as people might have hoped.

Before buying the plant, Serious Materials signed a union contract with the UE union local 1110 and promised to hire back any of the 250 workers who still wanted their jobs. Union and company officials had originally said they planned for a full plant opening in May or June.

But even now, only about 15 former employees are back at work. This is perhaps not surprising, given the lead time needed for stimulus incentives to translate into actual orders, assuming that does in fact happen on a significant scale.

The stimulus does not give funds directly to a company like Serious Materials. The idea is that tax breaks for weatherization of government buildings and grants to low-income home owners would increase demand for energy-efficient building components.

Serious Materials officials said the company is working directly with different government agencies to plan green building renovations. But unbeknownst to many people, the stimulus actually did not cover new windows for homeowners until recently.

Now new results from the National Energy Audit Tool (NEAT) mean that low-income homeowners making up to 200 percent of the federal poverty level can get up to $6,500 for new windows as part of the Weatherization Assistance Program (WAP), the funding of which was increased by the stimulus. (The federal poverty level requirements mean a family of four making $44,000 a year would basically qualify for WAP funds.)

Serious Materials celebrated by launching its own line of WAP products. The company says their windows can cut energy costs by 40 percent a household, which would cut an average energy bill by almost $700 a year.

The grant means that, theoretically, workers awaiting rehire by Serious Materials could replace their own windows and save on energy expenditures—especially come winter. This spring, President Obama announced a goal of providing weatherization assistance to 1 million homeowners.

It appears that workers at Serious Materials on Goose Island are mixing hope with healthy skepticism, waiting eagerly for these incentives to kick in, but also remembering they have typically had to fight for every gain they’ve gotten. They know they can’t just sit back and wait for the stimulus or the factory’s new owner to make everything all right.