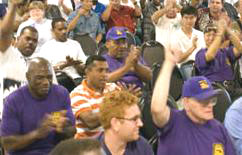 In a historic vote, Securitas security officers—contracted by Kaiser—ratified their three-year union contract in a unanimous vote on Saturday, July 25. This is the first ever national union contract for U.S. security guards.

The guards are represented by SEIU-United Service Workers West.

“This is a day of firsts,” said an elated William Bailey, who has worked as a guard for Kaiser Permanente Sunset in Southern California for more than 31 years. “It’s historic, uncharted territory.”

Among the gains: family healthcare and higher wages. Hourly wages will be increased by at least $.40 per year across the board.

According to SEIU spokesman Mike Chavez, the increase will be much greater because the contract sets new minimum wages. The lowest paid officers will see pay hikes as high as $1.20 per hour during the first year of the contract.

Workers will receive healthcare through a Kaiser plan with no deductible, free hospital care and $10 co-pays for doctor visits and prescriptions.

Workers will also receive two days a year of paid sick leave and two days paid bereavement leave. Paid holidays will also increase to a total of seven days per year. Those who work on a holiday will receive time and a half pay.

Kaiser security guards will now, for the first time, be protected by a grievance procedure that prevents their employer from unfair and arbitrary treatment.

About 2,000 security guards are at various Kaiser facilities across the nation, 1,600 of them in California.

“Kaiser security has been around a long time but this is the first contract and a positive one because there are increases in wages, assurances of [good] health care and other benefits,” Chavez said.

The guards had originally been contracted out by Inter-Con, “who intimidated the guards when they struggled to form a union,” Chavez said.

In February Kaiser replaced the contractor for the security officers with private security company Securitas, which, Chavez said, agreed to recognize workers’ right to form a union.

Eddie Iny, Secretary Treasurer of SEIU-United Service Workers West, said: “The officers never lost sight of what is really important—improving healthcare for themselves and their families, raising salaries, and having time off if they are ill or injured.”

Iny added, “In the middle of a budget crisis that is hurting working families across California, all parties should be applauded for coming together to reach a fair and just agreement that helps workers achieve a path to the middle class.”

SEIU is said to be the largest and fastest-growing union in North America, with more than two million members.