Will Teachers be Left Behind by the Stimulus Gold Rush? 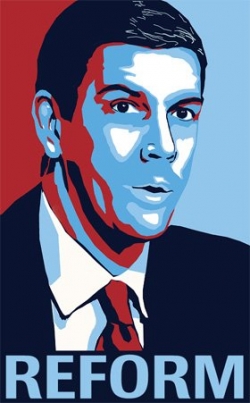 To teachers across the country, the carrot that Washington is dangling before schools could soon start to feel like a stick.

As the Obama administration funnels stimulus money into public schools, states will compete for a $4.3 billion fund known as Race to the Top. But the strings attached to the money reflect a vision for school reform that many activists fear will drive the corporatization of education and the marginalization of organized labor.

One key requirement is that states allow teachers to be assessed on the basis of standardized test scores—a policy that could ignite labor disputes over merit pay and raise philosophical questions about how to evaluate educators.

The funding guidelines could endanger some states’ access to the funds, due to “firewall” policies that bar the direct use of test scores in employment-related decisions, such as awarding tenure—a protection against unfair judgment of teachers based on limited data.

The Race to the Top guidelines also prioritize the expansion of charter schools and alternative pathways for teacher certification, like Teach for America’s fast-track program for top-tier college grads. Both have been hyped as a way to bring innovation and “entrepreneurialism” to public schools. But critics view charters and alternative credentialing as steps toward privatization and deregulation, which in turn alienate struggling students and undermines union power.

Randi Weingarten, head of the American Federation of Teachers, signaled a willingness to compromise in a recent statement, calling for “shared responsibility” and transparency in reform efforts.

But many cast doubt on the merits of the Duncan brand of reform.

In a new report on efforts to reform teacher pay schemes, the Center for American Progress challenges the common assumption that “compensation is the primary incentive for teachers to perform at higher levels”:

[N]umerous approaches have been punitive or simplistic in design, implementation, or marketing. This is one reason that teachers and unions have frequently opposed efforts to link learning and compensation. Teachers have often seen these efforts as professionally insulting and as misunderstanding what leads to improved performance.

To progressive education activists, the Duncan brand of reform—which was incubated during his tenure as CEO of Chicago Public Schools —embodies the worst aspects of No Child Left Behind.

Though the Bush-era law was billed as a path toward alleviating racial and socioeconomic educational gaps, critics say it has cheated disadvantaged students by emphasizing rigid high-stakes testing regimes rather than genuine intellectual development.

From a labor standpoint, Jim Horn of Schools Matter says the Race to the Top will accelerate the downward spiral in public education:

The winners of the Race to the Top will not be teachers, who will be further humiliated by having meager pay raises to their embarrassingly low salaries now dependent upon test score production work….

Among the winners will not be the embattled teaching profession, since Mr. Duncan prefers the marginally-prepared and the alternatively-certified teachers to those with real credentials based on both content and pedagogy expertise.

While Duncan tries to pull schools and unions toward a hardline “accountability” agenda, there are signs that some educators are bucking mainstream reform trends from the ground up. Teachers at some charter schools are moving to unionize to stabilize their jobs and working conditions.

In Duncan’s former hometown, a crop of radical teachers has risen up against Chicago’s plans to overhaul and shut down under-performing schools. The Caucus of Rank and File Educators (CORE) filed a discrimination lawsuit last month to challenge the city’s school “turnaround” initiative.

CORE alleges that black teachers have been disparately harmed by staff purges, and that the restructuring has disrupted students’ education, with little accountability to parents and surrounding communities.

Amid all the political bluster around “fixing” public schools, the lesson that seems to constantly elude policymakers is a simple one: a classroom is a space for intellectual exploration as well as a workplace, and it works best when it enables students and teachers to thrive together.

In the Obama administration’s race to reform, is there room at the top for the whole school community?