Can Labor Get Out of This Mess? (Part Two) 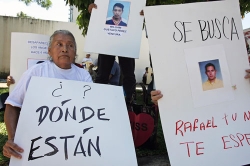 Relatives of illegal immigrants who went missing or died while attempting to reach the U.S. demand an investigation into the whereabouts of their loved ones, in front of the Mexican Embassy in San Salvador in September 2006.   (YURI CORTEZ/AFP/Getty Images)

[Editor’s note: The first part of this article can be read here.]

One of the most important reasons why change is so hard for U.S. unions is the continuing legacy of the cold war.

Discussion in labor is difficult because the cold war taught unionists that political differences beyond a limited range would result in marginalization at best, expulsion at worst. You can’t talk freely if you’re afraid for your career or your job.

That cold war straight-jacket strengthened a hierarchical structure and culture, very different from the egalitarianism in COSATU or Salvadoran unions. We have forgotten the Wobblies’ idea that we’re all leaders, equals among equals.

At the same time, unions have accumulated property, treasuries, and political debts, and have an interest in defending them, making institutional needs paramount. We don’t challenge the government out in the streets beyond a certain point because we don’t want to risk not being at the table when the deals affecting our future are made.

Radical ideas and the language to describe them continue to be illegitimate because their suppression has been unacknowledged. After 1995, the prevailing attitude in national leadership was, “We don’t need to rehash the past. Let’s concentrate on where we’re going now.”

It’s difficult, however, to determine that new direction if you can’t talk about where the old one was headed, and what was wrong with it. Nowhere is this confusion more evident than in labor’s attitude toward U.S. foreign policy. In Colombia the barriers to solidarity with its left-wing union federation came down, and unions like the Steelworkers became bastions of support for its embattled unionists.

Yet next door in Venezuela, U.S. labor supported coup plotters against the radical regime of Hugo Chavez. Under pressure from US Labor Against the War, the AFL-CIO publicly rejected U.S. military intervention in Iraq. Yet the Democratic Party’s support for war in Afghanistan and for Israel’s attack on Gaza is greeted with silence.

Change is always uneven and incomplete, but the change process in U.S. labor has virtually stopped, leaving unions increasingly caught up in internal divisions and conflict.

Lacking agreement on how and why the power of unions was undermined by the suppression of the left, there has been no consensus on what should replace the old cold war philosophy.

A deeper understanding (that is, greater class consciousness) can lead to ideas for alternatives, both in radical reforms of the existing system, and even its replacement. This kind of education, part of the normal life of unions in South Africa or El Salvador, requires an investment of time, and a real interest in how workers think.

People act autonomously based on their ideas, and workers with greater understanding and consciousness are able to lead themselves and each other, rather than acting solely on directives from above.

Further, while education doesn’t necessarily produce immediate mobilizing results, it does treat workers as the people whose thinking, and eventually whose leadership, is the key element in building a union.

The North American Free Trade Agreement caused a huge debate in labor that coincided with the rebellion that brought Sweeney into office. It marked a watershed in the growing awareness among U.S. workers of the impact of globalization, and brought forth important new movements of solidarity, especially between unions and workers in the U.S. and Mexico.

NAFTA and the battle in Seattle at the WTO not only profoundly affected the thinking of workers about the future of their own jobs, but they also set the stage for the huge debate over immigration that followed. Those workers and unions who were educated by the debate were in a much better position to understand the way neo-liberal reforms displaced workers and farmers in Mexico, and led to migration across the U.S./Mexico border.

The debate over immigration policy now puts critical questions before U.S. unions. Are unions going to defend all workers (including the undocumented), or just some? Should unions support immigration enforcement designed to force millions of workers from their jobs, so that they will leave the country?

And how can labor achieve the unity and solidarity it needs to successfully confront transnational corporations, both internally within the U.S., and externally with workers in countries like Mexico?

Understanding that NAFTA hurt workers on both sides of the border is a crucial step in answering these questions, providing the raw material workers need to understand globalization. But raw material is just that. Workers and unions need an education process, and educators, who can help turn that raw material into consciousness and action. In more radical times, left-wing socialist and communist parties played that role of educator. Since this kind of organized left presence in labor is much smaller today, it is unclear what can take its place.

While we try to find organizational answers to these questions, however, we can find ways of trying to use these problems and crises to ask questions of each other, and the workers around us. Perhaps these questions, and our efforts to answer them, can tell us something, not only about the nature of the system, but why we want to change it, and to what.

So here’s a question. Let’s think about the future. If there were not such wide gulfs in the standard of living from country to country—if we had a socialist world—would the migration of people stop?

We move and migrate in part because we can. We can get on a plane and travel halfway around the world in a matter of hours. Mexican undocumented workers, living on a hillside under the trees in San Diego, call and check in with their families by cellphone two thousand miles away in a small village in Mexico. And we are more connected than ever before by the bonds of family and friends to people across many borders.

So what does the great liberatory goal of socialism mean to the movement of people? The character of migration under capitalism, especially today, is that it is forced migration, manipulated by the powerful as a labor supply system. So wouldn’t socialism mean that we would do away with the forcible nature of migration, while we also protect the ability of people to move and travel wherever they want, and defend their rights wherever they go?

And the last question: Do we have to wait for socialism to move toward this goal? Is it possible to end forcible migration and protect the rights of migrants under capitalism? Is this system capable of such a radical reform?

And of course the answer is, it depends on us.