On the Waterfront: The Struggle for Sustainable Port Trucking 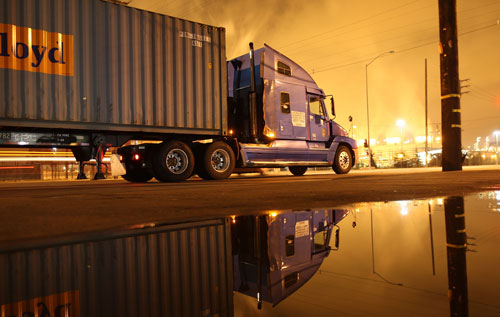 Trucks drive near the ports of Long Beach and Los Angeles, the busiest port complex in the United States.   (David McNew/Getty Images)

America’s teeming harbors are the lifeblood of global commerce. But for the truck drivers who keep the shipping industry flowing, and the communities living downwind, the bustling ports emit a peculiar kind of poison.

A recent report by the think tank DEMOS details the corrosive impact of deregulation on the port trucking industry over the past generation. The Motor Carrier Act of 1980, which was intended to break monopolies and lower shipping rates, has in fact sent a once-solid profession into free fall.

The result? Drivers today are forced to work long hours for extremely low wages, in large part because they are classified as contractors, rather than employees.

Though they supposedly operate as independent business people, contractors are typically tethered to the bosses of trucking companies that control their vehicles and exploit drivers as marginal labor.

Moreover, according to the report, the disjointed industry has saddled roadways with aging, unsafe and dirty trucks, and work-related injuries and health problems are common among drivers.

A recent study by the East Bay Alliance for a Sustainable Economy and the Pacific Institute found that the health impacts of the shipping industry in California cost the state roughly $34 billion each year, primarily stemming from pollution-related premature deaths, hospitalizations and respiratory disease, as well as thousands of missed days of work and school.

In the Oakland port area, since most port truck drivers are uninsured, they and their families rely on publicly funded healthcare programs at a cost of roughly $4.5 million each year. Worse, if drivers are hurt on the job, as contractors they lack access to basic occupational safety and health protections and workers’ compensation coverage.

While sub-standard healthcare compounds the impact of pollution on workers, many of the hardest hit Bay Area neighborhoods are low-income communities of color, who can ill-afford the physical and financial toll of filthy air.

In response to the dual assault of labor and environmental exploitation, a diverse alliance of activists has emerged to push for a more sustainable port economy.

The Coalition for Clean & Safe Ports, which represents various public health, labor, faith and community-based organizations, has seized the connection between economic and environmental justice in a campaign to bring cleaner trucks to the ports of several cities.

The Coalition’s Clean Trucks Program in Los Angeles compels trucking companies to hire drivers as full employees, not contractors, and to uphold comprehensive labor and environmental standards. The Coalition estimates (PDF link) that clean truck initiatives in Los Angeles and Long Beach are on track to pump $5 billion into the regional economy.

The results of the initiatives are on streets every day: 4,500 clean-burning and alternative fuel trucks, driven by workers who are breathing easier and earning more.

The American Trucking Association, an industry group, has sued to block a similar program from starting up in Oakland. Last month, the Coalition and the Oakland Ports Commission pressed Congress to amend federal transportation laws “so there will be no doubt that ports can set and enforce trucking industry standards to make goods movement sustainable for local communities and workers.”

Aditi Vaidya, an organizer with the Coalition for Clean & Safe Ports, recently wrote in the journal Race, Poverty & the Environment:

Despite these tough economic times, we have a unique opportunity to re-create the Oakland Port trucking system. All over the country, campaigns for clean and safe ports are showing the strength we gain when we join forces. We are seeing our once-separate fights for the rights to good jobs and clean air come together in a single struggle for environmental and economic justice.

Beneath the soot clouding Oakland’s port is a fertile common ground for the labor and environmental movements. The urban ecological crisis is pushing “blue” and “green” organizations to seed fresh alliances with poor communities of color.

The road to a sustainable waterfront can’t just end at a fair paycheck for truck drivers. The ultimate destination is a community that enables all its members to work and live with dignity.