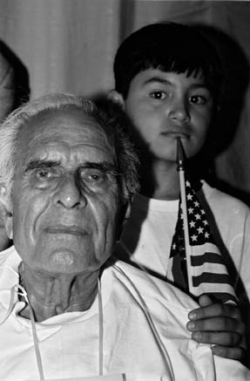 Bert Corona and his grandson, at the huge LA immigration rally where his contribution was finally recognized   (David Bacon)

Bert Corona was a child of the line in the sand between the U.S. and Mexico – the problems of the millions of people crossing the border dominated his life. He was a hero of urban Latinos – the factory workers, the domestics, the people getting jobs on the corner. And he was a radical, more explicitly so than the other great Latino figure of his generation, Cesar Chavez.

Corona’s generation gave us social security, unemployment insurance and industrial unions. It was a generation hardened by the great depression — the Los Angeles of Corona’s youth was the scene of violent industrial wars at North American Aviation and on the waterfront. It was the Los Angeles where immigrants arriving in the wake of the Mexican Revolution were met with the business end of police billy clubs, the city of Sleepy Lagoon — where blacks and Latinos sat in one section of movie theaters, and whites in another.

Some might say LA hasn’t changed that much. But today the key to getting elected in LA is winning the votes of hundreds of thousand of working-class Latinos. And the undocumented workers he fought for have found their own voice — their strikes and organizing drives sweep through industry after industry, and some of LA’s unions have taken up their cause.

If this is not the same world Bert Corona was born into, it is certainly one he helped create.

Corona’s father was a comandante in Francisco Villa’s Division del Norte, one of the two main insurgent armies of the Mexican Revolution, and moved across the Rio Grande after Villa was defeated by counter-revolutionaries. Born in El Paso, Corona grew up moving back and forth between the U.S. and Mexico in an era when crossing the border wasn’t the militarized zone it is today.

Corona came to Los Angeles, where he was caught up in the labor ferment of the late 1930s. He became president of Local 26 of the International Longshore and Warehouse Union and an organizer for the CIO. That labor experience was welded to the revolutionary history of Corona’s family to frame his understanding of the world.

“Bert saw Mexicanos in the United States, not just as a people suffering discrimination, but as a working-class community, exploited for their labor,” says Nativo Lopez, who helped Corona organize the Hermandad Mexicana, a community organization of Mexican workers. “He believed that change would come about by creating organizations and leaders among grassroots people, in unions and in the neighborhoods.”

Looking at the huge mass of Mexican immigrants populating LA barrios, Corona saw not just a population excluded from the political mainstream, but a future in which their votes would eventually shape the politics of the city and the state. The growing ranks of Latino political leaders nationally owe a debt to Corona and his coworkers, who spent decades fighting to build political organizations to empower Latinos.

Corona became a leader of El Congreso Nacional del Pueblo de Habla Espanola, and after the war, the Associacion Nacional Mexicano Americano. Both were leftwing organizations of militant Mexicanos, with close ties to the industrial unions. It was the era when the leftwing of the U.S. labor movement was at the peak of its political strength. Decades before today’s cross-border organizing movement was born, an ANMA chapter organized by Corona launched sympathy strikes at American Smelting and Refining Co. in solidarity with coworkers employed by the same company in Mexico and Latin America.

ANMA also organized braceros. The bracero program brought workers from Mexico into the U.S. from the 1940s to the 1960s, housing them in huge, fenced-in barracks in rural areas, where they worked in the fields for extremely low wages. Corona, Ernesto Galarza, Cesar Chavez and others struggled to end the program, since braceros were not only exploited themselves, but used to undermine wages and efforts by farm workers to form unions. ANMA did not just lobby against the program, however, but sought to organize the workers.

That idea became a hallmark of Corona’s approach to immigration. After the program was ended, immigrants without papers continued to come to the U.S., driven by hunger and poverty. Conservative unions of the Cold War era were very hostile, calling for deportations and measures to try to ban them from jobs, saying the undocumented couldn’t be organized. Corona never stopped fighting that idea.

Corona’s ultimate vindication came when the AFL-CIO in 1999 adopted a new pro-immigrant policy, calling for amnesty for undocumented workers and an end to employer sanctions, which make it illegal for them to hold a job. At the end of his political life, he was finally honored at the labor federation’s huge rally for amnesty at the sports arena in June of 2000.

Corona was an unrepentant radical. “I would call myself a socialist,” he wrote in his autobiography, Memories of Chicano History. But his vision was a very indigenous one. “I believe in the American dream,” he said, “or at least in my version of it…It’s similar to the dream of the Mexican Revolution, which also promised freedom, equality and democracy. Clearly, that hasn’t been fully achieved. In both cases, they’re unfulfilled dreams.”

Corona was not an isolated voice on the margin. He helped found the Mexican American Political Association. He worked in the Democratic Party, trying to force it to deal with the political aspirations of Mexicanos and workers. “He saw that our struggle for immigrant rights and Mexicano political power was tied to much larger movements,” Lopez says. At the same time, he was unafraid of being a prominent figure on the left, and was co-chair, with Angela Davis, of the National Alliance Against Racist and Political Repression.

When Lopez himself became the target of Bob Dornan and the Republican right, after Dornan’s defeat at the hands of Loretta Sanchez in Orange County, “Bert told me: ‘Don’t leave. Stay and fight.’” Dornan, one of the most conservative members of Congress, alleged that Lopez and the Hermandad Mexicana had registered non-citizens to vote. In the end, Lopez was vindicated, and Sanchez’ career in Congress is living proof of the power of the Latino vote.

“That was typical of Bert,” says Eliseo Medina, a former UFW leader who today is vice-president of the Service Employees International Union. “He didn’t just put his finger up to see which way the wind was blowing. He took a principled stand and stuck to it.”