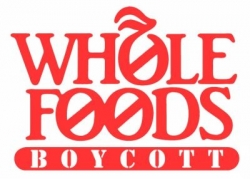 The left has always had its share of hypocrisy, but mega-green grocer Whole Foods has dished out a virtual cornucopia of outrages lately.

When CEO John Mackey aired his views on healthcare reform in a Wall Street Journal op-ed (a longer version appears here)—warning that “a government takeover of our health-care system” is on the horizon—many customers felt betrayed by the world’s earth-friendliest supermarket chain. But it’s hardly the first time Mackey has presented, even flaunted, right-wing views.

Apparently seeing no contradiction between conservative politics and a supposedly enlightened food empire, Mackey has dismissed criticisms that its expanding commercial grasp over the natural foods market contributes to inequity in the food industries.

And like other mega-retailers, Whole Foods is all business when it comes to dealing with organized labor. Over the years, the company has systematically shut down efforts to unionize its employees.

As Matthew Blakely pointed out in a 2007 Nation article, the hippie veneer doesn’t square too well with its militant anti-unionism:

It’s the second-biggest union-free food retailer, behind Wal-Mart. Yet in its twenty-seven-year history, only one of its 197 stores, in Madison, Wisconsin, successfully unionized, and that union fell apart with no contract to show for workers’ efforts. Instead of bargaining with the union, Whole Foods challenged its validity. Mackey even went up to Wisconsin and personally handed workers copies of a pamphlet titled “Beyond Unions.” When the Madison Whole Foods voted to decertify in 2004, Mackey spread his beyond-union gospel on a nine-month cross-country tour, during which he discussed with employees “what Whole Foods was about.” The store has also fended off unionizing attempts in Berkeley, California; St. Paul, Minnesota; and Falls Church, Virginia.

Mother Jones reported earlier this year that an internal memo issued by Whole Foods listed shutting out unions as a major priority for the company. According to a recording of an employee meeting at a San Francisco store, a manager warned workers,”once you become represented by the union… basically everything, every benefit you have, is kind of thrown out the window, and you renegotiate a contract.”

(Curiously, at the helm of Whole Foods’ anti-union campaign was Lanny Davis, former counsel to the Clinton Administration and now a lobbyist for the anti-Zelaya coup regime in Honduras)

Just as it brands itself as a wholesome mom-and-pop enterprise, Whole Foods boasts of generous benefits for workers and a “friendly,” democratic workplace culture. The company recently scored corporate-responsibility points with an agreement with the Florida-based Coalition of Imokalee Workers to provide higher wages for farm workers.

The idea of treating workers well but preventing them from advocating for themselves reflects a philosophy of “benevolent paternalism,” as author Kim Fellner described it in the Mother Jones piece. Management can co-opt the debate on political enfranchisement by showing that workers have no reason to complain and thus deserve no right to do so.

At the heart of Mackey’s rhetoric is a belief that individual self-interest should guide the distribution of public goods. Mackey touts his company’s health benefits program as a model for national healthcare policy, based on the kind of “choice” and “personal responsibility” that savvy consumers might bring to the produce aisle. Not surprisingly, this dovetails nicely with Whole Foods’ new marketing campaign to promote healthy diets.

Whole Foods’ role in the corporatization of organics, anti-union agenda, and influence on the healthcare debate reveal how questions of economic, health and labor justice intertwine amid competing visions of “sustainability.”

From the breakfast table to the doctor’s office, the social infrastructure is besieged by free-market evangelism.

But can momentum for a Whole Foods boycott, actually cause us to take our business elsewhere in a meaningful way? After all, the company has fattened itself by tapping into an underlying hypocritical streak in its customer base: a belief that we can shop our way to a better planet without fundamentally altering a consumer culture that degrades labor and natural resources.

Even the activists who lauded Whole Foods’ promise to farmworkers know that a conglomerate-controlled production chain ultimately stifles progress toward food justice. Many are working toward community-oriented food systems that protect local farms, workers and neighborhoods.

Mackey may incur backlash as an embodiment of Whole Foods’ hypocrisy, but the company’s purported goal—social responsibility through conscious individual choices—still has resonance in the broader environmental sustainability movement.

The corporate perversion of the green ethic is captured in Mackey’s claim that the Declaration of Independence and the U.S. Constitution contain no “intrinsic right to health care, food or shelter… This ‘right’ has never existed in America.”

Should it? Labor, environmental and consumer activists could form a powerful answer to the question of rights by approaching health, nourishment and economic security as complementary strands of a single struggle—the whole of which is greater than the sum of its parts.